Weekly property review: Why neighbours may value a property differently than other buyers

IN this first part of a two-part series, we pose some questions: If a neighbouring property comes up for sale, do you think about making on offer? It could be a once in a lifetime opportunity. And how much can a neighbour afford to pay, relative to other bidders?

Peter Taylor from independent South Australian livestock and real estate agency, Spence Dix & Co, said there were a number of reasons why livestock producers purchased neighbouring properties, but these could vary greatly depending on issues like land area and financial capacity.

The size of a viable unit often varied depending on soil type, rainfall and land use.

Mr Taylor said smaller landholders purchased mainly to improve their land asset’s viability. “If they do not continue to expand, it may only be a matter of time before they become unviable, and are forced to leave the land.”

He said larger landholders who already owned a viable living area would continue to purchase adjoining parcels pf land, as it was often the cheapest way to expand.

“Often it means the expanded land area can be managed with no more staff, and the same plant and equipment. It spreads the fixed costs further, and they may stock the second block with surplus cattle or sheep of their own, rather than buying stock, which is a huge benefit when livestock prices are as high as they currently are.”

Mr Taylor said larger landholders often had the advantage of being able to negotiate better deals with their banker, and had other advantages compared to smaller landholders when buying an adjoining block of land.

Central Queensland specialist agribusiness accountants and financial advisors, Powers, have a number of clients currently investigating neighbouring cattle property acquisitions to increase scale and capitalise on the current optimism in the cattle market.

According to Martin Pentecost, Powers’ director of Agribusiness and Finance, intending vendors often called their neighbours as a first port-of-call to see if they are interested in purchasing their property.

“The convenience and strategic value of buying a neighbouring property will often be of particular interest, giving the producer immediate access to an additional area without incurring unnecessary freight costs and extra management expenses,” Mr Pentecost said.

Murray Davis, who specialises in rural valuations in Biloela, Central Queensland, said the most important thing to consider in such a decision was economies of scale.

“With a neighbouring property, a buyer may not need another staff member, another tractor, another set of yards. It’s right there. There’s no freight costs or travel costs.

“If you want to check water you can do it straight away. It can just be added-on to the existing operation and there’s a hell of a saving on a dollar per hectare (basis) if you don’t need to buy that extra management infrastructure.”

A good example of this thinking came only last week, when Tim Lyne from Ray White Rural at Moree, NSW, sold Colomie – a highly productive mixed farming, backgrounding and finishing enterprise at Wallangra, 75km northwest of Inverell, for $4.8m. 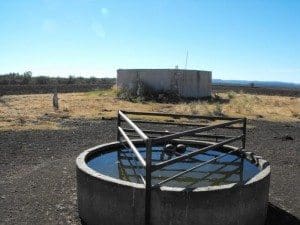 Waters and cultivation on Colomie, near Wallangra, NSW, bought by neighbours for $4.8m last week.

He said two neighbours bid for the 1600 hectare property, but it wasn’t a case of neighbours trying to ‘buy at any cost.’

“It’s just that Michael and Sonia Claridge from next-door Wallangra Station were in a position to pay more,” he said.

Mr Lyne said the trend in grazing country in his area now was to ‘get bigger’ or ‘get out’.

“This purchase gave the Claridges the opportunity to increase their existing holding and reduce their management and machinery costs, on a per head basis,” he said.

According to Mr Lyne, machinery is one of the biggest costs for landholders. “If they can purchase the next-door property, it’s a huge saving because a farmer can utilise the plant he already owns.”

Purchasing neighbouring properties happens regularly in the southern states and particularly in the country east of Moree, according to Mr Lyne.

‘There are smaller holdings scattered through there, and farms of 1000 to 2000 acres have become almost unviable. Even though the country is expensive, farmers are happy to pay a premium to purchase the place next door, and ultimately lift their productivity and save on machinery costs.”

Accountancy and rural property valuation professional, Michael Vail, said it often made good financial sense to buy a neighbouring property, and if the quality was there, it could be a good chance to provide scale and opportunity.

“Graziers are happy to pay a premium to secure a property that is as good as what they already have. There are some people who have finishing country that they are also breeding on. If they can purchase a lesser quality property next door for breeding, it may free-up their better fattening country. So it makes good economic sense.”

Purchasing a second property further away often created the need for a separate manager or caretaker.

“However, if it’s next door, the buyer often won’t have to duplicate infrastructure or capital expenditure.”

Mr Vail said there were also generational issues – landholders wanting to pass on extra land to children. “If that is the case, I would suggest they need to be doubling the size of their property asset every 10 to 12 years,” he said.

Mr Taylor said if smaller landholders did not continue to expand, even if it was only a few hundred acres at a time, their sons and daughters were likely to need to obtain off-farm work to survive, and would most likely not return home – being lost to the industry.

“There is a great deal of talent currently being lost to the rural industry because the younger generation cannot stay home,” he said.

Next week: We look at the benefit cost of purchasing a neighbouring property, and provide some examples.