South Australia’s Moralana Station sold immediately after being passed-in at auction recently for more than $6.4 million to an undisclosed buyer.

Described as a relatively safe breeder property, it also has the capacity to background weaners or fatten cattle.

Tom Brodie from Brodie Agencies said the country is light carrying, but quick responding to both small and larger rainfall events.

“As the water runs off the high country, it is soaked up and utilised by the flood-out country – growing good fattening pasture,” Mr Brodie said, “while the mulga and other browse bushes (as well as the herbages, salines and forbs that grow following small rainfall events) all help make it a safe breeder block.”

There are large areas of good flood-out creek channels along the three main creek systems that run through the aggregation – Paddy’s (33km), McKenzie (65km) and Cattle Creeks (23km). The Mayne River runs for 36km through Mayneside and Eildon Park.

There are more than 20 dams and 50 waterholes strategically spread across the four properties.

The estimated carrying capacity of the Eildon Aggregation is 3500 to 4000 breeders, keeping progeny to weaning age or longer in a normal season.

The livestock included in the sale consisted of Droughtmaster cross and Brahman cross breeders with a number of steers, heifers and calves still running with cows.

The vendor did not guarantee any cattle numbers with the sale, with the intending purchasers asked to make their own pre-sale judgement of the cattle numbers running on the Eildon Aggregation. Coralton spans 17,424ha and is situated 75km north of Winton. The sale is expected to settle in coming weeks.

The country is a good balance of grey and chocolate cracking soils, heavy carrying undulating open pebbly downs running down to the Dillalah, Irene and Olio Creek channels.

Buffel grass is scattered along the creek channels and out onto the downs, but there is a heavy infestation of prickly acacia.

Selling agent Tom Brodie said the grass cover was very good for this time of year.

“Covering more than 12,000ha, the incoming purchaser could comfortably carry between 1000 to 1250 head of cattle until the normal summer wet season.”

The estimated carrying capacity in an average season is 1800 adult or breeder cow equivalents.

Owned by Ron and Rachel Earle, who are downsizing, Coralton has 14 dams and an artesian bore that is jointly owned with the neighbouring property Lilford. A South Australian family has paid around the $5.6 million ($326/ha) asking price for Coralton,17,424ha of good quality downs country north of Winton.

South Australia’s Karoonda Park has been purchased by a local producer for around $8 million.

Karoonda Park is currently being used as a lucerne seed production unit with hay, cereals, clovers and legume cropping, complimented by sheep breeding and finishing.

However, it is also a high-capacity finishing and growing property capable of running more than 3000 ewes and 250 cows.

The soils are sandy loam over limestone with some gently undulating sandy rises and the operation is watered by bore with a mains supply backup to concrete troughs in all paddocks.

The Campbell family decided to sell in order to consolidate their assets after 10 years of ownership.

Geoff Watts from Landmark Harcourts was responsible for handling the marketing and sale of Karoonda Park. 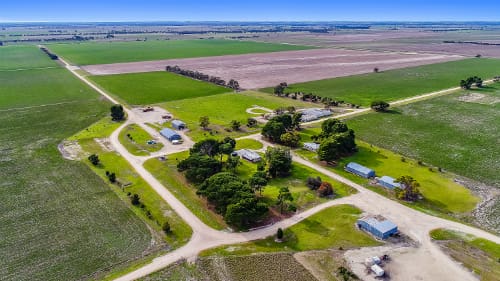 South Australia’s Karoonda Park, a 1530ha holding located 10km west of Keith in the state’s upper south east, has been purchased by a local producer for around $8 million.

South Australia’s Moralana Station sold immediately after being passed-in at auction recently for more than $6.4 million to an undisclosed buyer.

With a picturesque back drop of the Flinders Ranges (see image at top of page), the 62,133ha grazing operation is located 43km north of Hawker and 117km from Quorn.

Moralana receives beneficial water from four major creeks that run through the property from the western slopes of the Flinders Ranges creating significant areas of flood-out country.

The terrain on Moralana is principally flat with a portion of hill country on the south east corner. The most impressive outlook provides views towards the western side of Wilpena Pound, which feed the underground aquifers and creeks which run through the property.

Over the past seven years, the owners have spent considerable capital on key aspects of this station including infrastructure, buildings and water reticulation.

The productivity history over the past nine years is an average carrying history of 753 cattle and 4083 sheep.

Moralana was offered on a walk-in walk-out basis by Landmark, with cattle, sheep and plant and equipment.

Extensive Quilpie district grazing property Gooyea Station was passed in for $5 million at auction in Roma on October 25.

The 133,700ha the rolling term lease is located 170km north of Quilpie and has an estimated carrying capacity of 3500 breeders. It was offered with about 2000 head of cattle included.

Gooyea has received 350mm of rain since March and has what is described as an excellent coverage of fresh mulga and native grasses.

Two registered parties were bidding on the property, which carries mulga, box, and ironbark with areas of scattered gidgee and brigalow.

Gooyea is fenced into 11 main paddocks plus holding paddocks. Water is supplied by numerous creek systems with a number of large permanent and semi-permanent water holes and springs throughout, numerous dams, and four bores.

The main set of cattle yards have a crush, loading ramp and a five-way draft. There are six mustering yards.

Negotiations are continuing following the auction, but the property is now offered for sale bare of plant.