A Queensland buyer is believed to have paid around $20 million for Inverary , in Northern New South Wales’ Upper Hunter, worth around $4500 to $5000/ha bare

A Queenslander is believed to have paid around $20 million for one of the outstanding livestock breeding and fattening properties in Northern New South Wales’ Upper Hunter.

The Glenmorgan district producer, driven by rainfall and viability, is understood to have paid around $4500 to $5000/ha bare for Inverary aggregation, plus the elite Angus breeding herd and the plant and equipment.

Situated at Kars Springs near Scone, Inverary is located in the sheltered and picturesque Brawboy Valley, bounded on both sides by low plateau type hill country.

For the past 12 years, the property has been conservatively managed as a livestock breeding and fattening property, using holistic and regenerative farm management techniques, capable of running up to 1200 breeding cows or up to 24,000 DSE.

The property is watered by a 2km frontage to the Dart Brook, the Nerobingabla and Cuan spring fed creeks, eight bores, three equipped wells and 42 surface dams.

When Inverary was listed in October last year, Chris Meares from Meares & Associates told Beef Central the natural resources of the basalt soils, high rainfall and conservative management supported one of the outstanding Angus breeding herds in the Upper Hunter.

Neighbour Chris Skelton, Wanganui, purchased the river block, while the eastern portion of the property was secured by the Knights and Hennessey families from St George.

Tarilla and the nearby Cashmere West were listed in April last year by Ian Walker and family for $12 million each.

The mostly grey soils are developed coolibah/belah country with some flood plains, running 1500 cows and followers. It would also suit 15,000 sheep.

The sale of Tarilla was handled by Brendan Devine from Elders.

The 19,381ha operation breeds and backgrounds large numbers of cattle for feedlot and store markets. A local consortium has paid $6.75 million at auction for the picturesque northern New South Wales grazing properties Glencolvin and Bonadea.

The 2128ha blocks are located at Liston in the Tenterfield Shire – a region renowned for its ability to breed and fatten livestock due to quality soils and reliable rainfall.

Featuring a productive blend of well-grassed grazing tops and sheltered hills, the aggregation is offering a huge body of feed after being destocked for the past year.

Water is provided by a number of spring-fed and catchment dams and a running creek which dissects the property.

The sale of Glencolvin and Bonadea was handled by Bruce Douglas from Ray White Rural.

A Gold Coast family has paid $8 million (including plant and equipment) for just 364ha of pristine plateau country in the Gold Coast hinterland.

Saddleback is one of the largest holdings close to the coastal beaches – 35km from Broadbeach and 86km from Brisbane, adding a value well beyond livestock alone.

The rich red and black volcanic soils are fenced into eight main paddocks for the cattle breeding operation which is lightly stocked with 100 breeders and progeny.

At 550m elevation, Saddleback enjoys views 360-degree views across the Runaway Bay to the Brisbane skyline.

The vendors, who had held the property since 2012, invested in pasture renovation, access improvements and the re-establishment of a quality cattle herd. Saddleback is one of the largest holdings close to the Gold Coast beaches – 35km from Broadbeach and 86km from Brisbane, adding a value well beyond livestock alone.

The 477ha block is situated in the heart of the Eurongilly Valley, renowned for its pasture and fodder production, as well as its prime lamb and beef production capabilities.

This, together with its favourable 550mm annual rainfall, has seen management operate it both as a highly productive cash and fodder cropping property, and a livestock breeding and fattening operation running on improved and native pastures.

The sale of Coreena East was handled by Chris Meares from Meares and Associates. 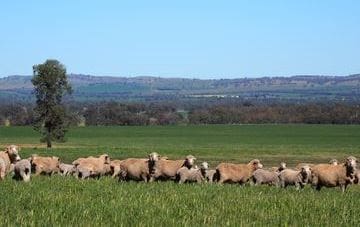