THIS week’s property review focuses on recent sales of note across the country, and some recent listings of interest. We’ll publish summaries like this every couple of weeks in future as part of our regular property coverage – Editor

The 1345sq km Mary River Station in the Northern Territory’s Top End has sold privately to previous owners, the Fisher family, for a WIWO price of $6m including livestock and plant. The price equated to around $5.25m bare.

With 90km Mary River and Kakadu National Park frontage, the operation has been running a successful wildlife safari hunting business, but can carry more than 4000 head of cattle. It was purchased by local pastoral family, Alan and Sara Fisher, who also own Wombungi and Swim Creek properties in the northern Victoria River District where they run both cattle and buffalo. Mary River Station has sold WIWO for $6m, including some livestock and plant.

Both ANZ and KPMG suggest the reports are incorrect. Beef Central understands that more than 40,000 head of cattle from the stations have sold to Chinese interests based in Hong Kong, who will lease the land from the current owners, rather than purchase it.

Earlier reports suggested a sale had been negotiated for land and stock for a price of around $70 million, to a Chinese businessman. Four additional sub-leased pastoral leases – the 161,000ha Louisa Downs, the 141,000ha Bohemia Downs, the 80,000ha Carranya Station and the 182,000ha Lamboo Station – were apparently not included in the deal.

The Yougawalla aggregation has spent the past 18 months on the market.

The 152,500ha Woodstock and Glenora Stations, 210km north of Richmond in North Queensland, didn’t attract any registered bidders at auction and were subsequently passed-in. Offered by Elders and Ruralco as a going concern with a high quality herd of approximately 7500 primarily Brahman cross cattle, plus a full list of working plant, equipment and furniture, negotiations are now underway with interested parties.

Some prices quoted in $/ac in original comments were accidently divided to produce $/ha, instead of multiplied, as they should have been. The correct figures now appear in this revised version of last week’s article. The mistake may have given readers the impression that the agent quoted in the article, Hourn & Bishop QLD’s Gary Bishop, was under-representing local land values. Apologies to Gary.

Beef Central is required, by law, to convert any imperial measurements to metric for publication. In all cases in our property reporting, metric $/ha appears first, sometimes followed by $/acre, in brackets, as a guide. Editor.

Danny Bukowski from Raine&Horne Rural put together the 127,199ha Cunnamulla Aggregation, spanning eight properties, after being approached by one grazier and then talking to other local landholders about potential sale.

The properties are primarily involved in wool and meat sheep production with additional income from goat harvesting. Mr Bukowski said interest is strong from across Australia, particularly for the five properties with exclusion fencing.

“Most of the enquiry has been from farming families with existing operations seeking breeding country. The aggregation is being offered as a whole or three separate parcels, giving smaller operators the chance to expand.” Similar in size to the above aggregation, the 125, 293ha Clover Downs is a very different property. Described by selling agent Colliers International as ‘a dynamic enterprise mix of sheep, wool and beef production’, it carries 64,000 DSE or cattle equivalents.

Capital spent by current owners Hassad Australia (the agricultural land company owned by Qatar’s sovereign wealth fund) has resulted in exceptional infrastructure, including fences, water security and buildings. Ben Forrest from Colliers International said there was a significant production upside from exclusion fencing which surrounds the entire property. The successful buyer is likely to be a corporates or large high-net worth private family. Hassad is understood to be re-balancing its pastoral portfolio. Hassad paid $18.5 million bare for the holding in 2010, bought from Clyde Agriculture.

While, country in south-west Queensland has traditionally made $185/ha to $247/ha, the price of each aggregation will come down to where the buyers see the value. Expressions of Interest for both properties close on June 16.

The 509ha Craigleigh, widely recognised as one of the best cattle properties in southern Queensland’s picturesque Mary Valley, is being offered for auction on June 1 by Hourn and Bishop QLD and Australian Rural.

For more than 50 years, the Kandanga property, 48km from Gympie, has been the home of the Garglen Brahman Stud founded by respected cattleman, the late Percy Bishop. It is currently owned by former Australian Brahman Breeders Association president Shane Bishop and his wife Sandra, who are relocating to Moura in Central Queensland after a recent purchase. Selling agent Gary Bishop said Craigleigh boasts reliable annual rainfall and impressive facilities. Craigleigh is widely recognised as one of the best cattle properties in southern Queensland’s picturesque Mary Valley, and for many years was the home of the Garglen Brahman Stud

There’s been enormous interest reported in the 1050sq km Martins Wells station, 90km north-east of Hawker in South Australia. Simon McIntyre from Landmark Port Augusta said there was very little supply of property of this type recently, and the cattle and sheep holding had attracted “more interest than any other station in SA in the last 20 years.”

There is an abundance of water, with the Artipena permanent water hole a feature oasis rarely found in arid zones. Comprising open plains dominated by low blue bush, cotton bush, black bush, leading out to Mitchell grass plains, the WIWO sale includes around 6000 sheep and 500 cattle. Martens Wells will be auctioned on June 15.

Details surrounding CBRE’s recently advertised ‘Island Grazing Opportunity’ remain largely secretive. What is known is there a number of islands involved, covering 30,000ha; the combined carrying capacity is 300,000 dry sheep equivalents; there are five separate vendors and there are 14,000 Angus cattle and 20,000 sheep available for sale. Described by Danny Thomas as ‘productive, high rainfall grazing land of unparalleled scale and quality’, the package includes the Sustainable Agriculture Fund’s 6785ha King Island Aggregation. As a stand-alone operation, it carries 116,000 dry sheep equivalents, and is selling with 5500 Angus cows plus progeny, plant and equipment.

In the meantime, Mr Thomas reported there has been exceptional enquiry so far for the Sustainable Agriculture Fund’s property portfolio of 17 farms in five aggregations – North Star and Darlington Point New South Wales; King Island and Cradle Coast in Tasmania; and Lake Bolac Western Victoria. They are being offered for sale in one line or as separate properties by an Expression of Interest campaign closing June 16. Mr Thomas said CBRE was particularly keen to engage with locals and farming families. 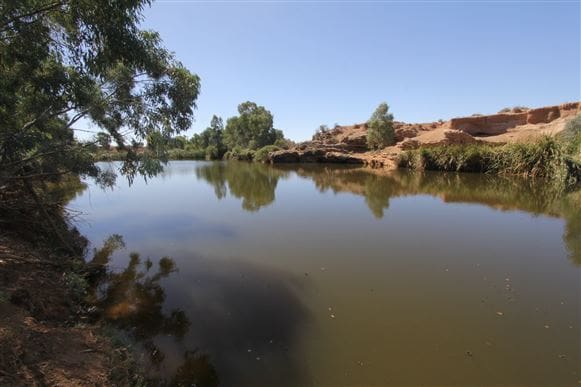 Martins Well has an abundance of water, and has attracted “more interest than any other station in SA in the last 20 years,” agents say.

In October 2015, the noted grazing, cropping and lotfeeding enterprise sold for an undisclosed sum to the Central Agri Group – representing a partnership between Lawsons Angus, Australia’s largest Angus beef seedstock producer; and Shark Lake Food Group, the operator of the export lamb and beef abattoir near Esperance. The Shark Lake processing facility was recently advertised for sale on Beef Central.

CBRE has been appointed to market the Joanna Plains property on behalf of the receiver, David Young, including an additional 2670ha of leased land which may be assigned to the purchaser. Phil Melville said Joanna Plains was a ‘diamond of a property, absolutely top-shelf’ and is expected to attract strong buyer interest from a diverse group of investors. It is being offered for sale via Expressions of Interest closing June 28.

After 110 years and three generations, the Schiller family is selling its 6438ha Riverina grazing property Raheen.

Located 35km south-east of Hay in south-western NSW, the property has dual frontage to the Nyangay and Eurolie Creeks. According to Matt Horne from Elders Rural, the impeccable, mixed stock enterprise (which runs both Angus beef cattle and Collinsville-blood merino ewes) is renowned for its continual performance and production.

“Raheen features magnificent open grass country, a high carrying capacity (consistently carrying 3500 breeding ewes and 90 cows and calves) and is free of any noxious weeds,” he said. The property has a $4.35m price tag. Some stock are available for negotiation. Raheen has run both Angus cattle and Collinsville-blood Merino ewes