In collaboration with the Foreign Investment Review Board, the ATO has compiled the first register of foreign ownership of water across Australia, effective up to 30 June 2018.

The top ten foreign countries accounted for 3371 GL, or 9.1pc of the total Australian water entitlements, covering both ground and surface water. On a national basis, the greatest use of foreign-held water entitlement was for agriculture (66.5pc) and mining (26.3pc). In percentage terms, water for agricultural use by foreign owners was highest in South Australia (96pc), Victoria (93pc) and NSW (87pc), and lowest in Western Australia (less than 22pc), Northern Territory (47pc) and Tasmania (65pc).

Less than 6pc of foreign-held water entitlement was in the form of leases (contractual rights), while less than 3pc of foreign held water was irrigation rights, issued by irrigation infrastructure operators. 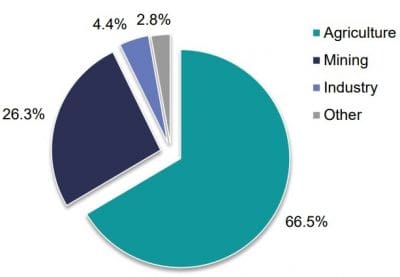 More than 81pc of foreign-held water entitlement is held within Australian incorporated entities.

On a state and territory basis, New South Wales/ACT had the greatest amount of foreign-held interest in water entitlement on issue by volume, accounting for 1306 GL. Queensland had the next largest portion by volume, with 1219 GL, followed by Western Australia with 995 GL. The remaining states and territories all had individual totals less than 250 GL.

Almost one fifth of all groundwater across NSW is foreign-owned, while Victoria registers one of the lowest levels of foreign ownership, with just 2.3pc of groundwater and 2.7pc of surface water held by overseas entities. 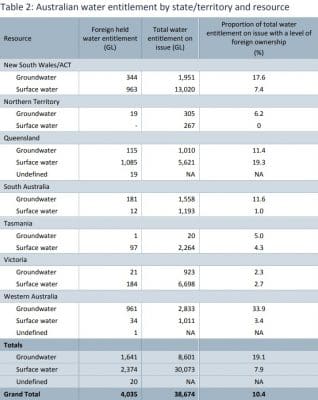 Like its companion register covering land ownership, the Register of Foreign Ownership of Water was established to provide greater transparency about the level of foreign ownership of Australia’s water entitlements.

The report released this month is the first, in what will grow into an annual series. The Commissioner of Taxation will now report annually to the Treasurer on the operation of the Register of Foreign Ownership of Water or Agricultural Land Act 2015, and is required to publish aggregate statistics of foreign ownership each year.

The ATO reports on data from the Register in aggregated format only, and does not identify individual owners.