IN the final stage of an agreement struck between traditional owners and miners in 1997, the Queensland Gulf country’s Waanyi People will soon assume 100 percent ownership of Lawn Hill and Riversleigh cattle stations on the Gregory River, south of Burketown.

Waanyi Advancement Ltd has commenced the final stage of the 100pc acquisition of the two large grazing properties for the Traditional Owners, more than two decades after the Gulf Communities Agreement was reached with Century Mine and the State government. 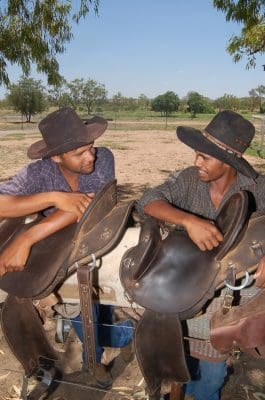 Young indigenous ringers in a training program on Riversleigh. Click on images for a larger view

The mining company made a commitment to the Waanyi People that it would return 100pc ownership of Lawn Hill and Riversleigh to Waanyi.

“The 100pc acquisition of the cattle stations is the most significant event to happen to Waanyi and will provide a permanent source of jobs for the Indigenous people in the Gulf,” said Waanyi Elder, Eunice O’Keefe in a statement.

“A lot of hard work over several years has been undertaken to get to this position and we are all proud to be Waanyi and to be in control of our own traditional lands.

“The stations are important businesses for Waanyi people and help to provide employment for Waanyi people and others in the local community. It is vital that the mining company fulfils the original agreement as the properties sit in Waanyi Country, meaning Waanyi people are permitted to practice our traditional lifestyle such as camping, hunting and fishing.” Waanyi Elder Kevin Cairns said the agreement meant Waanyi could leave a positive cultural and environmental legacy for future generations and protect country, as well as protecting cultural heritage, the environment and waterways as well as employment opportunities.

“In 2015, Waanyi turned the management of the cattle stations around to a consistently profitable business. The stations are run in a professional, transparent and profitable way as per the terms of any board,” he said.

“It is more important than ever that all Waanyi People band together and work toward ensuring that the remaining 49pc of the cattle stations are secured by Waanyi with 100pc ownership as per the terms of the original agreement with the mining company.”

Riversleigh for many years served as a valuable skills training site for young indigenous people looking to work in the northern cattle industry, supplying staff to AA Co and other nearby pastoral operators.

Lawn Hill was owned and operated by colourful Brazilian cattleman Sebastiano Maia in the 1980s. One of Riversleigh’s symbol brands, incorporating a turtle