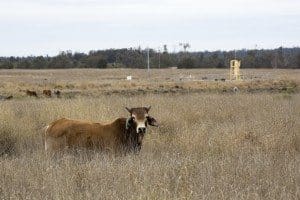 STANBROKE has won a heavily-contested tender for the right to lease 70,000 hectares of Southern Queensland grazing and cropping country owned by the Queensland Gas Company.

The leasing rights for 40-property portfolio were highly sought after, with 43 expressions of interest received and ultimately 19 bids lodged with QGC for the properties, which were divided for offer into six geographic zones.

A QGC spokesperson said Stanbroke was awarded the lease of the entire portfolio because its bid was “outstanding against all evaluation criteria”.

“In particular, (Stanbroke) demonstrated the most complete capability to run QGC’s properties according to agricultural best management practices,” the spokesperson said.

Until now the 40 rural properties in the Surat Basin have been managed by QGC, which is owned by the BG (British Gas) Group.

The tender process commenced with a call for Expressions of Interest in December 2014, followed by a bid process completed in September 2015.

QGC said tenders were evaluated by an independent agri-economist for management of one, some or all of its properties.

“All tender bids received were seriously considered against the evaluation criteria provided to the tendering parties.

“We sought a partner or partners who will manage our properties safely, in an environmentally and socially sustainable way, and who will maximise their agricultural potential.

“This allows us to concentrate on our core business of natural gas development and production.

“QGC liaised with landholders, agisters and Queensland’s agricultural industry since March 2014 to develop a new program for management of its land.

“We have consulted about the change in management strategy with the Department of Agriculture and Fisheries, AgForce and the Queensland GasFields Commission.”

It operates eight properties across about 1.6 million hectares in north Queensland, a 30,000 head feedlot south-west of Chinchilla and a beef processing facility at Grantham in the Lockyer Valley.

The company will use QGC’s properties to prepare cattle for their feedlot near Chinchilla.

QGC says it has been communicating with agisters and share farmers since March 2014 about plans to change our approach to managing our rural properties.

“We will be honouring any agreement we have with agisters and share farmers for time to make alternative arrangements.”

The evaluation criteria included requirement to demonstrate existing agricultural operations in the region, experience and technical expertise in managing properties of a similar size according to a land management plan, commitment to becoming accredited against BMP, contractual commitments to local employment, development and purchasing.

The properties within the portfolio comprise various infrastructure in support of both grazing and cultivation.

“They demonstrate the ability for agriculture and resources industries to co-exist within the region and to mutual benefit.”

As part of the contract award Stanbroke has committed to: