The southern Queensland property market was still showing strong competition and firming values at the end of the financial year, although there are some signals indicating it is levelling off after the significant growth that occurred over a relatively short period, according to Herron Todd White’s July rural property report. This impression may be the result of what normally occurs mid-year, with a reduced volume of sales, said HTW’s Toowoomba-based valuer, Stephen Cameron.

“The true test to where the market in this region sits won’t be known most likely until the end of the year,” Mr Cameron said.

“For the year-to-date across the southern Qld market, there has been a distinct slow-down in the number of transactions, which appear to be down at least 30pc from this time last year. Generally, this result is due to the lack of properties available for sale, or at least good quality holdings to where the bulk of the market activity is transacting,” he said.

Below is a graph reflecting the sales trend for the southern Queensland market over the past seven years 2010-2017. It identifies the increased number of sales transactions for 2015 and 2016 and firming median sale price. 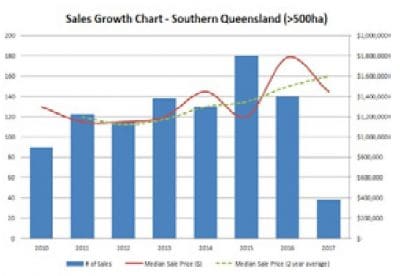 “So the question still remains, will 2017 be at the peak in the cycle? Many property professionals believe we are somewhere between 10 to 12 o’clock on the property cycle with 12 o’clock considered the peak,” Mr Cameron said.

Another influence in the market, especially in far south-western Queensland, is the continued dry seasonal conditions which has likely curtailed the level of market recovery in that area. Stock agents are reporting large numbers of cattle coming in from both the Mitchell grass downs and mulga country, to reduce stock numbers.

“We have recently come back from trip via the Strezelecki Desert and surprisingly the cattle observed appeared to be holding on well for those in the channel country. There was some water observed in the Cooper system and associated lakes of the Diamantina. However, there is very little ground-cover in the red mulga lands further east, where some landholders will need to push timber under fodder permits likely in the weeks or months ahead,” Mr Cameron said.

Transactions that have occurred through the market of recent are that of Dandaraga, a 1259ha mixed farming holding 40km northeast of Goondiwindi. The country contained a mix of heavy melon hole to lighter sandy loams, developed to about 60pc of cultivation and balance grazing, improved with a standard home, support shedding, cattle yards and nominal grain storage.

The property transacted for $2224/ha overall, which reflects a 28.5pc increase in value from the previous sale in 2011. A second transaction further to the north was that of Yarra Glen in the Yagaburne district. Comprising a 2019ha grazing holding, containing mostly brigalow/belah country with some lighter forests adjacent to Yarrill Creek. The property transacted for $2.5 million reflecting $1238/ha. Both properties were purchased by the Piction family who operate a broadacre farming holding. The acquisition of the additional lands will provide opportunity for further scale with country development.

Further west in the Augathella area, the market, despite lagging behind activity to that country further east, is now starting to provide some solid market indicators. The sale of Mareto, a 9446ha semi-open downs block to the north-east has been purchased by the Pearts, whom hold country to the south-west Dunvegan. The country contains a mix of wooded gidgee with brigalow, bauhina, myall and bottle-tree scrub and having some 800ha of fodder cultivation. The property transacted at $6.65 million reflecting $704/ha ($285/ac) in February.

To the west of Augathella, Aubigny, a 7212ha, mostly open Mitchell grass downs block was purchased in February by the Hindmarch family for $469/ha ($190/ac). The Hindmarchs previously sold Wallal a 17,700ha holding south of Charleville for $2.35 million or $133/ha in December at auction. The sale was somewhat unique given the property had two carbon farming agreements (CFI) under a human-induced native regeneration methodology.

“Generally we are seeing much more activity within this space, with landholders taking up the option to access an alternative income stream by registering carbon projects,” Mr Cameron said.

“Under the human-induced native regeneration methodology, the landholder is effectively agreeing to promote and manage the regrowth within the project area. These agreements have a permanency period of either 25 or 100 years. Although the landholder receives payments for Australian Carbon Credit Units (ACCUs) as sequestered under those contracted, there is a management requirement, financial liability and the potential of reduced productivity as a result,” he said.

“To date there has been very limited evidence of properties that have transacted with similar CFI projects. Therefore as valuers we are relying on our professional knowledge to interpret how the market perceives the benefits, versus negatives, to determine how these projects impact value on a property.

“Ultimately the more evidence available will provide a better cross-section of how the market will treat such encumbrances. We are aware of a pending sale of another project, which moving forward will provide another market indicator to benchmark the impact on property values.”