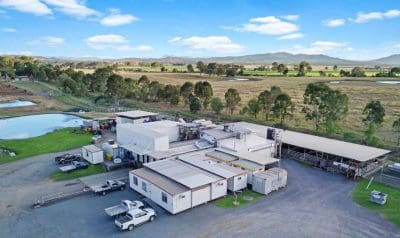 Highchester Meats is a fully-functioning and operational multi-species abattoir near Beaudesert, southwest of Brisbane.

The business would be suited to an owner/operator looking to grow a wholesale meat/service kill business, or high-value beef supply chains looking to secure killing arrangements in their own facility.

The 7.5 hectare site is located 5km north of Beaudesert at Gleneagle in the Scenic Rim, 60km from Brisbane.

The operation processes beef, veal, pigs, sheep, lamb and goats, with kill numbers showing around 850-1000 units per week, with scope for further increased production. The current kill is split between production for a wholesale meat business servicing butchers in the region, and service kill for others.

Andrew Williams from Elders Warwick said Highchester Meats was a strong family business with a 30 to 40 year history, and a good reputation for servicing contract kill carcase and boxed beef clients in local and interstate markets.

“The size of the abattoir is attracting good interest from industry players, food processers and large integrated beef producers in Queensland and northern NSW exploring the opportunity of killing their own stock for brand programs,” he said.

The sale will facilitate the retirement of business partners Brian Surawski and Trudy Herron.

Mr Surawski said the operation was ideally suited to someone who did not have a cash flow.

“People who don’t have a paddock-to-plate market but want to build one, can have a guaranteed cash flow from service kills and the business itself,” he said.

“It is one of the few small to medium abattoirs that has continued to trade profitably. I have a background in finance (31 years with the Commonwealth Bank) so I trim the process down to ensure it stays profitable,” he said.

Mr Surawski said a multi-species abattoir was a good option, from a flexibility perspective.

“If one species ‘goes off’ (like beef at the present, due to high cattle prices), we just move more of the operations to lamb, pigs or goats – that’s the true benefit of small works like this. We are not limited by one species.”

The facility is well located for access to saleyards including Silverdale, Beaudesert, Moreton and Warwick.

There are multiple undercover receiving and holding pens for stock, new laneway system to day yards and feed pens. Three bores service a tank system, and the facility has town water available.

Highchester is the first processing plant to be offered in the region since Pittsworth and Killarney, sold a decade or more ago.