Short-list of 11 in running for $100m Western Grazing properties 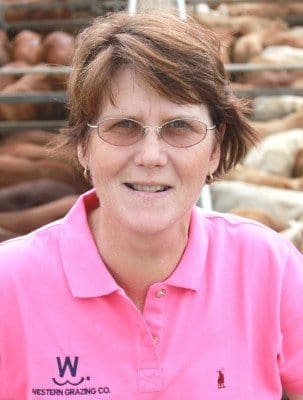 ELEVEN international and domestic entities remain in the running to purchase blue-ribbon western Queensland cattle breeding and growing properties, Rocklands and Tanbar, which were offered discretely to the market late last year.

Western Grazing principal Pam Deamer, the daughter of company founder the late Brian Oxenford, has decided to dispose of the two properties via an ‘off-market’ offer arrangement, in order to wind-back her grazing industry interests.

A successful sale of the two holdings, totalling more than 1.7 million hectares, would still leave Ms Deamer with six substantial northern Australian grazing properties, including some regarded as jewels in the crown of the extensive northern cattle industry.

The two offered properties have a combined carrying capacity of about 65,000 head of cattle in normal seasons. Currently Rocklands is running around 40,000 head plus this year’s calves. Tanbar is currently understocked with about 7400 head on hand, due to earlier drought, but with normal capacity to run 23,000 adult equivalents.

Interested parties have been told offers above $100 million will be considered.

Rocklands is a 677,964ha breeding property near at Camooweal on the Barkly Tableland in North Western Queensland, while Tanbar (including Mt Howitt out-station) is a 1.02 million hectare growing and breeding property in the Cooper Creek channels in South West Queensland.

Historically the two properties have worked well together, with the progeny from the Rocklands ‘calf factory’ being sent to the Tanbar ‘grass feedlot’ to grow and fatten.  The properties are 1250km apart.

Of those, 27 signed confidentiality agreements over the deal, and 16 then offered non-binding bids.

Bentleys is now working with a chosen short-list of 11 remaining investor entities, which will undertake property inspections and due diligence in coming months.

Beef Central understands that ten of those 11 entities are based overseas – European, North American and Asian. All ten will require Foreign Investment Review Board approval to proceed with a sale.

Significantly, there were five or six strong interests expressed from Asia early in the process, but all dropped-off within ten days of the Federal Government’s announcement that it planned to veto the original S. Kidman property sale proposal to Chinese interests, on national security/national interest grounds.

With the exception of one or two remaining parties involving joint Australian-Chinese investment vehicles, all other Chinese-based interests are now out of the running in the Western Grazing assets, Beef Central was told.

In a brief statement, Bentleys said the Directors of Western Grazing (Gambamora Industries Pty Ltd) had confirm that, following a strategic review of all the company’s cattle operations last year, they were in the process of divesting the two Queensland cattle properties.

An Investment Overview document was sent to potential interested parties in late October. Interested parties were then asked to register their interest and sign a Confidentiality Agreement, following which they were issued with an Information Memorandum providing complete details of the sale properties.

The late Brian Oxenford bought Tanbar and Rocklands in 2004 as part of the bust-up of Stanbroke Pastoral Co by new owner, the late Peter Menegazzo, following his buy-out of partners in the Nebo syndicate. In an unfortunate coincidence, both men were later to die in aircraft accidents.

The remaining grazing properties operated today by Western Grazing were part of the Oxenfords’ original purchase of Vesteys’ properties, including Wave Hill in the NT’s Victoria River District; Morstone; Magowra in the gulf bought from the late Wallace Logan; Oban near Cloncurry; plus smaller southern holdings at Uralla and Augathella.

“Weather permitting we expect to complete a transaction in late April or early May 2016,” Mr Cameron said. Property inspections alone will occupy the next 11 weeks, and will be subject to rain.

The company was taking advantage of the strong investment demand for beef cattle assets, the statement said.

The statement said Western Grazing Co remained committed to the cattle industry, its employees, customers and suppliers and will retain its other six cattle properties in Queensland and the NT.

Bentleys Ben Cameron can be contacted on (07) 3222 9777 or email bcameron@bris.bentleys.com.au