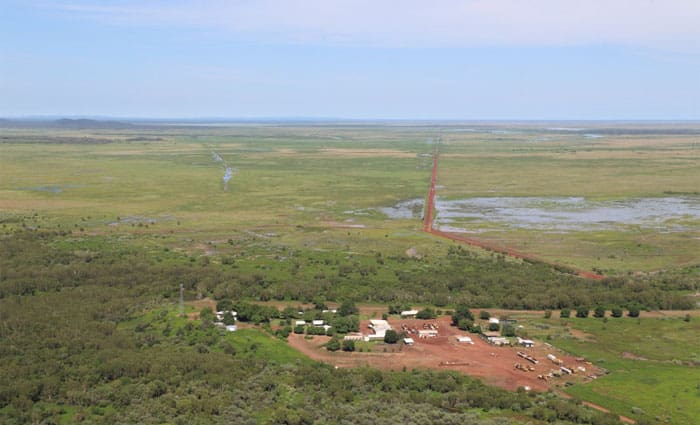 ONE of the bigger property listings to hit the market in 2017 has emerged, with the marketing of Legune Station in the Northern Territory’s western corner commencing this week.

Legune is a little over 2800sq km in size, currently running around 30,000 Brahman cattle, including extensive areas of floodplain country, totalling around 50,000ha. It sits on the eastern boundary of Carlton Hill, and north of well-established VRD district grazing properties like Auvergne and Newry. The property also supports a 55,000 megalitre dam.

With examples of good NT grazing country making $1100-$1200 a beast area this year, third-party estimates have suggested a price of $60-$70 million including stock might be achieved.

The property was previously marketed with expectations around the same price in 2008. Going back further, Hooker Corporation, then owners of nearby Victoria River Downs, sold Legune in the early 1980s to the Malaysian Sabar state government for $2 million.

The recent history of the property has created some unusual sale circumstances.

Readers might remember that Legune, with an extensive coastline facing the Bonaparte Gulf on the border between the NT and WA, was put to market in 2014, attracting interest from the listed Seafarms group, which announced its intention to build Australia’s largest aquaculture project farming prawns on a 10,000ha coast frontage portion of the property, under the ‘Project Sea Dragon’ name.

The Seafarm company already operates prawn farms near Ingham, on the North Queensland coast, claiming to be Australia’s largest producer.

Seafarm never bought Legune, but took an ‘option to purchase’ agreement, subject to clearing a number of regulatory and land-use hurdles in order to develop a small portion of the property for prawn farming.

Environmental and land-use change approvals have apparently now been completed, but SeaDragon does not want to go ahead and purchase the property outright, preferring to act as a leasee on a small coastal portion of land for the aquaculture operations, allowing the overall station to be purchased by others.

“The prawn farming venture is still going ahead, but the company that intends to build and run the farming venture doesn’t want to operate a cattle station,” CBRE lead agent Geoff Warriner told Beef Central.

“They don’t want to own the land, but to negotiate a long-term lease with a future station owner,” he said.

A small trial prawn farm has been constructed on the site, but earthworks on the major project, designed to unfold in three stages, is yet to start.

Property owners the McLean, Hall and Cameron families, diversified agribusiness investors from Queensland, have owned and operated Legune Land & Cattle Co as a cattle property for the past 10 or 15 years.

The property was marketed for sale in 2014, when the Seafarms group negotiated the ‘option to buy’, once the development approvals were completed. The Environmental Impact Study alone was a three-year project, and the project also required an unusual ‘non-pastoral land-use’ approval from the NT government. Grazing leases in the NT are bound by specific guidelines about what the land must be used for.

Seafarm now wants a ‘Novation of option to purchase’ on Legune, allowing a committed cattle operator to purchase the property, with Seafarm leasing the piece of coastal frontage land required to develop the aquaculture project.

The prawn farm ‘land-lease’ deal could provide an unusual second form of income for any prospective station buyer, who wanted to own and operate the cattle side, Beef Central was told.

The farming venture was not expected to present any significant disturbance in running the surrounding cattle enterprise.

“Legune will remain a viable large-scale cattle business, even when the third stage of the prawn farm is up and running, and it will represent a good rental return for the owner when the farming venture reaches that stage,” Mr Warriner said.

The sale of Legune will be managed by CBRE, through an Expressions of Interest process. The first stage of registrations of interest close before Christmas, with the final stage by end of February next year.