Cattle on Cobbora’s Avondale aggregation, a mixed farming and grazing operation totalling 3239ha, making it one of the largest landholdings in the region.

THE second instalment of a six-stage dispersal of land held by the Cobbora Holding Company in New South Wales has generated sales totalling $12.69 million for the NSW Government.

Almost 46,000 hectares of prime agricultural and grazing land around Dubbo, Wellington, Dunedoo and Mudgee in the state’s central west was resumed earlier by the former Labor state government as part of the Cobbora Coal project, before the development decision was overturned by the current coalition government last year.

The land is now in the middle of a six-stage divestment process, with last Thursday’s second-round auction in Dunedoo offering another 15 properties.

The Cobbora Holding Co sold a total of 5067ha of landholdings at auction last Thursday. Eleven of the 15 properties offered in stage two were sold at auction – nine agricultural properties and six rural lifestyle holdings.

A total of 39 registered bidders participated in the auction process. Negotiations are ongoing for the sale of the remaining four agricultural properties.

CHC chief executive Richard Outridge said there was strong interest in the properties from local residents and from right across New South Wales.

“We’re pleased with the outcome of this round of auctions and are looking forward to continuing to engage with potential bidders for the remaining agricultural properties,” Mr Outridge said.

The next stage-three phase of the land sell-off will include 6700ha of agricultural and lifestyle sized blocks, ranging from 10 ha up to 1838ha in size (see table), to be auctioned in Dunedoo on 1 June. A further three sales will happen later in 2017. 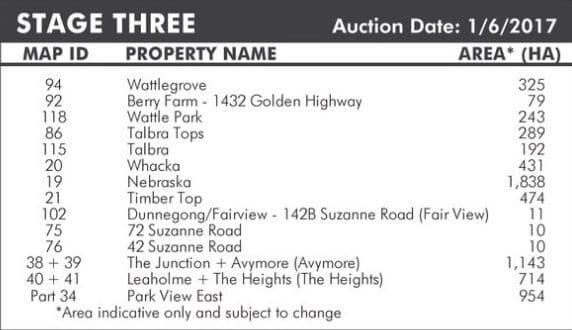 The aggregation of 158 local holdings bought over time by the Cobbora Holding Co for mine development totalled about 46,000ha. It includes about 32,000ha of mixed farming land, described as well-suited to a range of production enterprises including winter cropping and livestock enterprises grazed on native and improved pastures.

In total, the sale process will represent one of the largest agricultural land divestments ever seen in the NSW central west. The sale process is being staggered to encourage a wide range of purchasers, avoid oversupply, and promote the future economic prosperity of the region, the government said earlier.

“The initial announcement in relation to the CHC landholdings has already generated considerable buyer enquiry and we expect that when the auction campaign commences this will only accelerate,” CBRE agribusiness director Col Medway said earlier.

“We expect that the larger agricultural aggregations will be hotly contested, especially from established farming families looking to expand their existing landholdings,” he said.

In November 2015, the NSW Government announced it would cease the sale of the Cobbora Coal Project and begin a process to sell the Cobbora Holding Co landholdings as agricultural land. In June last year, the Government announced that the land would be sold in stages, by competitive tender, public auction or private sale depending on the type of land being offered.

All proceeds from the land sales will be directed to Restart NSW, to be invested into new and productive infrastructure across the State.

The sale process is being managed by CBRE in conjunction with local agents Milling Stuart.