IN A major vote of confidence in the King Island beef industry, a Victorian businessman has outlaid a figure understood to be around $45 million to secure one of the island’s largest grazing property portfolios. 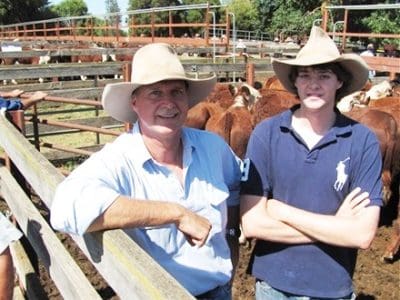 The new owner is successful Melbourne businessman Tim Roberts-Thompson, whose TRT Pastoral Co’s other major grazing asset to this point has been the 33,700ha former Twynam Pastoral property, Juanbung, located near Hay in the Riverina.

Mr Roberts-Thompson bought Juanbung in 2007 for around $10 million. His family also operates a Poll Hereford-breeding property, Howquadale Station at Mansfield in Victoria.

Mr Roberts-Thompson is understood to own a large contract cleaning business and earlier had significant investments in a telecommunications business with connections with Vodafone.

The King island aggregation will be integrated into his existing grazing operations, with progeny coming off King Island to be finished on the mainland.

Notwithstanding the obvious local logistical constrains, Mr Roberts-Thompson is understood to have seen value in King Island, offering relatively cheap land, at considerable scale. The sale price, on a bare basis, represented around $2200-$2400/ac – on par with recent local sales.

A syndicate of local King Island cattle producers put together a competitive, but ultimately unsuccessful bid, with a view towards subdividing the assets up within the group. There were also two strong offers from overseas interests.

Ultimately, a cash, unconditional bid from the Roberts-Thompson camp trumped the unknowns surrounding the foreign interests, whose bids faced the uncertainty of Foreign Investment Review Board scrutiny.

The $45 million sale price for the King Island aggregation, including cattle and plant, ranks it among the largest sales ever recorded for King Island. Earlier this year 6000ha Waverley Station, bought by Zip Industries’ Crouch family, was bought for around $40 million, including stock.

The King Island assets are part of a larger portfolio disbursement by Sustainable Agriculture Fund, which also included:

Expectations at the time of it was put to market suggested the overall SAF portfolio might fetch $180 million.

SAF bought some the King Island cattle grazing assets for a reported $27 million from Great Southern’s receivers about six or seven years ago, and has since made significant improvements. Earlier reports that additional farms had been added are apparently incorrect.

Documents provided in the marketing process indicated that the King Island Aggregation has been a stand-out performer for SAF, delivering more than 12pc returns a year for the seven years it has been owned, with about half of that delivered through income returns.

The SAF fund, which included investment from AMP and five or six other large super funds is being wound-up, being at the end of its nominated term.

“It is incredibly rare for a portfolio of high quality properties such as these, located in well-regarded and highly institutionalised agricultural regions to be offered to the market contemporaneously,” CBRE’s Danny Thomas said at the time of the portfolio offering.

“We anticipate the sale process will generate an unprecedented level of interest, with participation from all market sub-groups, from local farming families through to institutional investors.”