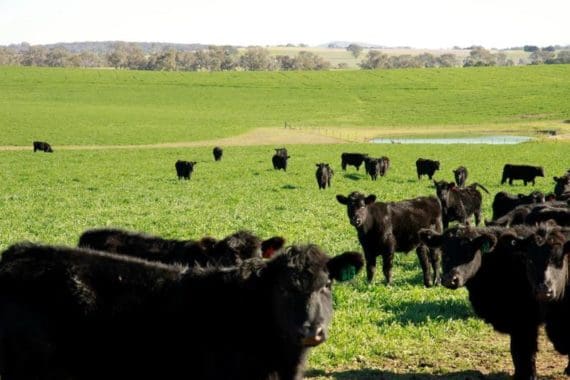 Billabong, 20km southeast of Boorowra, was bought for $5.825 million by a Sydney-based buyer

“We are aware of a number of strong sales in the Binalong and Boorowa areas recently,” Mr Johnstone said.

“The properties sold at auction with spirited bidding from a number of bidders and results exceeding expectations.”

A good example was Billabong, a 904ha mixed cropping/grazing property located on the eastern edge of the renowned south west slopes region about 20km south-east of Boorowa.

The property has been held in single family ownership since 1935. Long term family ownership is common in the Yass district with up to fifth generation farming and grazing families dominating ownership of the local land holdings.

Billabong was bought for $5.825 million by a Sydney-based buyer through a CBRE auction in Canberra. Water is a feature of this property which also enjoys extensive frontage to the Boorowa River.

“This sale indicated a strong value of $6443/ha overall, including buildings for a relatively large and well-improved holding,” Mr Johnstone said.

“The strength of this sale demonstrates the optimism currently prevalent in the market. This is the pattern of market development we are seeing in a number of Tablelands districts where several strong sales will occur on the back of several previous strong sales, generating growing market optimism in that area.” Another recent sale illustrating the current market trend was The Cliffs, a well-established highly productive 271ha mixed property near Molong. The Cliffs sold through local agent McCarron Cullinane Orange for $1.75 million. Pastures include rye, clover and phalaris on fertile basalt soils, delivering a carrying capacity of 100-120 head of cattle together with progeny.

The sale showed a value of $6441/ha overall including buildings. The holding is gently undulating open arable country throughout, with Bell River frontage and is generally typical of the appealing country seen around the Cabonne area.

The sale included a spacious two-storey three bedroom residence with scenic views. Below the house is an olive grove of 740 trees producing excellent olive oil. Throughout the property are shelter belts of Eucalyptus and other native species.

Extra infrastructure included a machinery shed, and new steel cattle yards. Stock water is supplied by three dams, a spring, troughs in all paddocks and stock and domestic water from the Bell River by diesel pump.