Movement at the Station – A roundup of rural property briefs

The firm’s director of agribusiness, Ben Craw, made the comments in New York City recently at the conclusion of a Global Agvesting conference.

He said major North American pension funds were looking to allocate $200 to $300 million of capital into agriculture, and Australia, like South America was an attractive place to invest.

But while many Australian agribusinesses easily fell under this banner, a wide-spread lack of management and financial reporting was a major deterrent.

“You may have an Australian family-farm operator that scales up over time, or their business becomes something akin to a small corporate.

“But their governance and reporting procedures haven’t grown with them, and that’s when I talk about becoming ‘investment-ready’,” Mr Craw said.

As discussed in today’s Weekly Property Review, there has been a rash of significant sales across the NSW Riverina over the past four weeks.

Here are some of the recent transactions mentioned, in greater detail:

Ferndale, an iconic Riverina property held by the Merrin family since 1869, has been sold by Miller and James Real Estate Temora. The 2024ha Cootamundra holding is highly versatile, growing fibre, beef and grain. It was purchased by a local farming family. While the agency wouldn’t disclose the sale price, Ferndale was originally offered for $10 million.

“It was a great result to see the property remain in local hands. It is another sign that the rural economy is chugging away nicely. People are optimistic about our industry, and this is been reflected in recent property sales. Demand for properties remains strong and the rural outlook could not be more positive,” he said. Berryjerry Station, one of the outstanding farming and livestock operations in the highly sought-after eastern Riverina of southern NSW, has been sold by long time owners, the Mott family, to near neighbours, Gnadbro Pastoral Company for an undisclosed price.

With its 27km frontage to the Murrumbidgee River, the 2170ha property combines both dryland and irrigated farming with high performance improved pastures.

The property, which once comprised a massive 60,700ha, boasts a long pastoral history in the region, taken up originally in 1834. Previous owners included the well-known Naughton, Osborne, Wilkinson, Leitch and Brady rural grazing families.

Rated to carry approximately 20,000 DSE or equivalent cattle, rural property specialists Meares & Associates said Berryjerry has a strong reputation as one of the leading mixed farms in the region.

Coolibah passed in for $11 million

Well-developed Wandoan (Southern Queensland) aggregation Coolibah was passed in for $11 million on a bid from the floor at auction in Brisbane on Friday.

Four of the six parties registered to bid at Ray White Rural’s auction were active on the day. 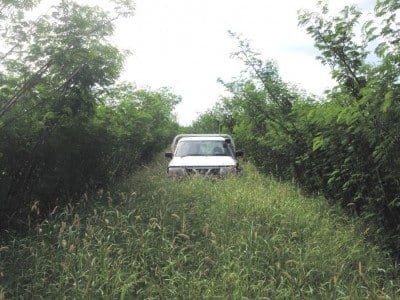 Mature stands of leucana with heavily grassed buffel interspaces on Coolibah, near Wandoan

In addition to well-established buffel grass on brigalow and belah scrub soils, the holding features more than 1600ha of established leucaena browse legume.

Coolibah is estimated to turn off about 1400 finished export steers each year.

Water is supplied from four bores, including a reticulated water medication system servicing the entire property.

Improvements include a good set of steel cattle yards serviced by a laneway system from outlying paddocks.