THIS week’s property review includes this article featuring recent listings across the country, and a separate summary of recent sales of note.

After 60 years, the Lucey family has decided to bring to the market its premium basalt grazing property in the tightly held Valley of Lagoons area of North Queensland.

Marionvale is situated near Greenvale, 130km south of Mt Garnet and 318km south west of Cairns.

The property consists of 16,053ha of premium breeding and grow-out country in a safe seasonal area, with the capacity to carry 3000 adult equivalents.

The flat to undulating black and red basalt country is dotted with expansive black soil plains, merging into some low lighter ridge country.

Marionvale boasts an abundance of underground water with permanent and seasonal spring fed creeks, as well as nine bores. Another attractive feature is its potential for farming development on the big open plain areas.

Selling agent Peter MacPherson from Ruralco Property would not discuss price expectations, but admitted many people had an opinion on what Marionvale might be worth.

And 12 months ago, Doug and Helen Keough paid $9.85 million for the neighbouring 13,835ha Maitland Station. Bare of plant and livestock, the sale price was equal to $620/ha.

“Taking Reedybrook, Maitland Downs and some of the Defence Force acquisitions into account, there is a bit of a floor in the market, so it will be interesting to see where the price heads, with most of the enquiry coming from locals,” Mr MacPherson said.

Marionvale is will be auctioned on December 12. The sale will include plant and around 2700 head of good quality Brahman and Brahman cross breeders. Marionvale consists of 16,053ha of premium breeding and grow-out country in a safe seasonal area, with the capacity to carry 3000 adult equivalents.

It is currently used for grazing (1806ha) and cultivation (811ha) with further development potential.

The property has a substantial body of high-quality wetlands grass including pangola, humidcola and para, and has a high carrying capacity.

After more than 50 years of ownership, the Anderson family is selling Capella Downs in Queensland’s Central Highlands.

Located 15km east of Capella, it comprises a good mix of country suitable for breeding, backgrounding and fattening, of which around 580ha is currently farmed.

Capella Downs is watered by nine dams and there is seasonal water in the Rocky Bar and Belcong Creeks.

“Capella is a very productive area and the property is just 15km out of town. The 530 branded cattle included in the sale are in good order for this time of year and if required, can be fed on the sorghum stubble that is currently growing.”

Expressions of interest for Capella Downs close on December 18. After more than 50 years of ownership, the Anderson family is selling Capella Downs in Queensland’s Central Highlands.

The Eastern Riverina’s Coreena East failed to sell at auction recently and is now being offered as a whole or as two separate parts.

The 477 hectares are situated in the heart of the Eurongilly Valley, renowned for its pasture and fodder production, as well as its prime lamb and beef production capabilities. 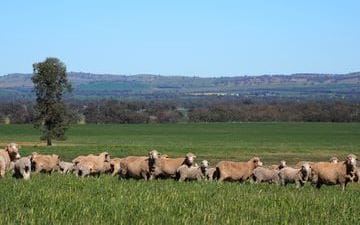 This together with its favourable 550mm annual rainfall have seen management operate it both as a highly productive cash and fodder cropping property, and a livestock breeding and fattening operation running on improved and native pastures.

Chris Meares from Meares and Associates said the property has been divided into south and north and has been listed for $9262/ha and $8027/ha respectively.

A quality mixed irrigated and dryland cropping and grazing enterprise located within the heart of the Limestone Coast region of South Australia is being marketed by CBRE Agribusiness.

Moorex is a premium developed and managed 2007ha holding, more than three quarters of which is arable, comprising gently undulating sandy loam soils.

The livestock enterprise has been based on a self-replacing Merino flock combined with prime lamb production supported by the council approved 6480-head lamb feedlot.

Accommodation is provided by the two-bedroom homestead and six bedroom shearers quarters.

Moorex is being offered under expressions of interest through CBRE’s Shane McIntyre 0429 557070. Moorex, a quality 2007ha mixed irrigated and dryland cropping and grazing enterprise is located within the heart of the Limestone Coast region of South Australia