This week’s property review includes this summary of recent listings of note, and a separate article on recently completed sales.

One of the last remaining large-scale grazing operations in the New England is being offered to the market by Colliers International Agribusiness.

Owned by the Quilty family since 1983, Kingsgate has boasted one of the largest Hereford female herds in northern New South Wales.

The country consists of pasture-improved open grazing country through to semi open and timbered grazing.

It features double frontage to the Sheep Station Creek and Yarrow River, 50 dams and three bores.

Typically, the New England experiences around 1000mm of annual rainfall, however the region is currently drought stricken and as a result, cattle numbers are well below the 1000 breeders and followers the property is estimated to carry under normal conditions.

“It is a reasonable sized enterprise for the region and the Quiltys have improved the watering points and fencing. Kingsgate is in good condition and has substantial development potential to increase carrying capacity. It also comes with some annual forest grazing permits,” he said.

Kingsgate is expected to attract substantial local interest, plus inquiry from large farming families and corporates.

The property is being offered to the market via an expressions of interest campaign closing on November 7. The enterprise, pictured at top of page, is situated in highly-productive, high rainfall country at Meadow Creek, in the foothills of the Victorian Alps, near the King Valley which is renowned for its fine wines and foods.

The aggregation spans 848ha and consists of four properties – Leatarn, Hancocks, Bartons and Sampsons, which are just 5km apart.

The cattle run on a mix of improved pastures based on rye grass, phalaris and clover with some native grass pastures.

Moyhu has been aggregated over the past 20 years by Bob Officer who has decided to sell due to succession planning.

Rawdon Briggs from Colliers International said most of the interest so far had come high-net worth individuals.

“The Moyhu Wagyu Aggregation is a turnkey opportunity. The successful bidder will have the opportunity to take control of an enterprise with a management team in place and on-going cash flow,” he said.

Moyhu aggregation is being offered for sale on a walk-in walk-out basis, via expressions of interest, closing on October 23.

The 52,000ha Canegrass Station is located 70km from Morgan and 170km from the Barossa Valley.

The low labour input operation is rated to carry 6400 adult sheep and boasts easy mustering and management, with a system of 29 self-mustering gates and associated watered holding yards.

There are also dams and pipelines to strategic water points which have recently been cleaned.

Geoff Schell from Ray White Rural South Australia said the vendors are committed to sell because they are pursuing other business interests.

“Greg and Carol Patten purchased Canegrass Station in 2006 and subsequently obtained an organic certification for sheep and goats, installed more than 200km of top class fencing and destocked 60 percent of the property to allow for regeneration, providing an immediate feed opportunity,” he said.

Mr Schell said as a result, several environmental groups were interested in the property’s diversity and vegetation type.

“Enquiry is also coming from producers from Broken Hill looking for feed security, a Sydney investor and mixed farming enterprises from South Australia, Victoria and NSW seeking a breeding base.”

Canegrass will be auctioned on October 4. There’s been Australia-wide interest in a South Australian sheep station featuring carefully engineered water and grazing systems. The 52,000ha Canegrass Station is located 70km from Morgan and 170km from the Barossa Valley.

With a picturesque backdrop of the Flinders Ranges, South Australia’s Moralana Station will be auctioned by Landmark Port Augusta on October 24.

The 62,133ha operation is located 40km north of Hawker and 120km from Quorn and is being offered on a walk-in, walk-out basis with cattle, sheep and plant and equipment.

Moralana receives beneficial flood-out from four major creeks that run through the property from the western slopes of the Flinders Ranges creating significant areas of flood-out country.

The terrain is principally flat with a portion of hill country on the south east corner. The most impressive outlook provides views towards the western side of Wilpena Pound, which feed the underground aquifers and creeks which run through the property.

Over the past seven years, the owners have spent considerable capital on every aspect of the station including infrastructure, buildings and water reticulation.

The location, facilities and surrounding scenery also make this a perfect tourism opportunity for those seeking to add value.

The productivity history (over the past nine years) is an average carrying history of 753 cattle and 4083 sheep. The 62,133ha Moralana operation is located 40km north of Hawker and 120km from Quorn and is being offered on a walk-in, walk-out basis with cattle, sheep and plant and equipment.

One of few freehold title pastoral enterprises in North Queensland has returned to the market and will be auctioned by Slaney & Co on November 13.

Rocky Springs is located 400km north west of Charters Towers and 330km south west of Cairns. It borders the Mt Surprise township to the east and has a 20km double frontage to Highway 1, the Savannah Way.

Rocky Springs has two major flowing permanent spring fed creeks, Fossilbrook and Elizabeth, which run east-west through the length of the property and in doing so provide year-long spring fed stock water and fertile grazing frontages.

Leuceana has been established on 40ha since 2010 and now provides reliable fattening capability.

Rocky Springs can sustainably carry 3500 mixed cattle or 2800 LSU. It is currently being run as a breeding unit supplying dry cattle to Doug and Mary Buchanan’s other fattening properties near Innisfail.

Selling agent Henry Slaney said Rocky Springs lends itself to the establishment of a tourism business.

“Mt Surprise is visited three times per week by a passenger bus from Cairns and the weekly Cairns-Forsayth-Cairns historic tourist train traverses part of the north west section of the property during the tourist season. It is a short drive to the Undara Lava Tubes, Cobbold Gorge and the gem fossicking area at O’Brien’s Creek.”

After 30 years ownership, the Buchanans have decided to downsize. Included in the sale are around 3000 good quality Brahman and Brahman cross branded cattle. The fat lamb factory, Dunns Plains, in New South Wales’ Central Tablelands is being offered to the market by Inglis Rural Property.

Situated 5km from Rockley and 38km from Bathurst, the 2609ha block can carry 4500 prime composite ewes and 550 breeding cows and fattening progeny.

It could also operate as a dedicated prime lamb production base running between 8000 and 8500 composite ewes plus followers.

Dunns Plains offers highly productive country with 60pc arable and sown down to perennial pastures, including phalaris, cocksfoot and clovers, and crops of oats and rye grass.

Permanent water is supplied by Peppers Creek and Jumpers Flat Creek, two bores and a well. The property also has a windmill and a network of surface dams, some of which are spring fed.

Expressions of interest for Dunns Plains closes on October 30. Situated 5km from Rockley and 38km from Bathurst, the 2609ha Dunns Plains can carry 4500 prime composite ewes and 550 breeding cows and fattening progeny.

The 477ha property is situated in the heart of the Eurongilly Valley, renowned for its pasture and fodder production, as well as its prime lamb and beef production capabilities. 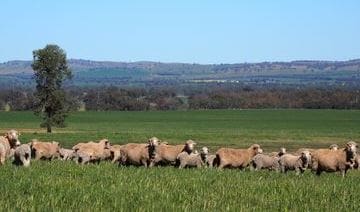 This, together with its favourable 550mm annual rainfall have seen management operate it both as a highly productive cash and fodder cropping property, and a livestock breeding and fattening operation running on improved and native pastures.

The holding forms part of the well-known property, Coreena held for the past 26 years by the Bunn family, and prior to that by the Blair and Ashton families.

It is being offered for sale via online auction on October 29 by Sydney-based rural property specialists Meares & Associates.

Owned by Ron and Rachel Earle, who are downsizing, the well grassed Coralton spans 17,424ha and is situated 75km north of Winton.

The country is a good balance of grey and chocolate cracking soils, heavy carrying undulating open pebbly downs running down to the Dillalah, Irene and Olio Creek channels.

Buffel grass is scattered along the creek channels and out onto the downs, but there is a heavy infestation of prickly acacia.

Selling agent Tom Brodie said the grass cover was very good for this time of year.

“Covering more than 12,000ha, the incoming purchaser could comfortably carry between 1000 to 1250 head of cattle until the normal summer wet season,” he said.

Coralton has 14 dams and an artesian bore that is jointly owned with the neighbouring property Lilford (there is a registered water agreement in place).

Mr Brodie said the price difference this year was a $50/ha increase.

“The reason for the premium is producers (from Queensland, the Northern Territory and South Australia) looking for grass. I have sold 11 properties and several more have gone to contract subject to finance this year, and most have been purchased by grass buyers,” Mr Brodie said. Feedlots in southern Queensland are likely to be among those showing interest in a 79ha block boasting significant water access.

Situated at Carpendale on the Lockyer Creek, 25mins from Toowoomba, the block has a potential estimated water capacity of 2500 to 7500 Ml (storage, two bores and three water licences).

Scan Property Consultants are handling the expressions of interest campaign which closes on October 24. Situated at Carpendale on the Lockyer Creek, 25mins from Toowoomba, the block has a potential estimated water capacity of 2500 to 7500 Ml (storage, two bores and three water licences).