The Venturin family’s 447,500ha cattle breeding operation borders the Buchanan Highway, 370km south of Katherine. It is being offered with 12,000 Brahman and Brahman cross cattle, pictured above.

Murranji last transacted in 2011, one month after it was passed-in at auction for $5 million bare of stock.

It is a well-balanced breeding property featuring a balance of country including Mitchell and Flinders grass plains that is currently running 10,500 head of cattle.

The Venturin family has a range of business interests in the Northern Territory, Queensland and South Australia, including the floodplain finishing property Finniss River, as well as furnishing, retail liquor outlets and supermarkets.

“This has created an additional 180,000ha of previously unimproved country, adding to the existing developed 110,000ha. A further 150,000ha remains undeveloped providing opportunity to create greater grazing capacity,” he said.

In addition, the capital expenditure includes the construction of an outstation complex complete with machinery/storage shed, accommodation, kitchen/dining facilities, as well as a 2500 head capacity livestock processing facility.

The property is well watered and boasts new or refurbished bores that pump to all new tanks and troughs.

Murranji Station is being offered on a walk in, walk out basis, via expressions of interest, closing on August 9.

Larger family-scale operators chasing grass and seeking expansion are showing solid interest in western Queensland’s 41,704ha Waroona Aggregation, which has been listed for more than $13 million.

Since purchasing the aggregation in 1995, the vendors, Michael and Sue Pratt, have run a successful mixed grazing enterprise of cattle, sheep and goats.

“The breeding, fattening and finishing property boasts scale, grass, exclusion fencing, excellent water and station improvements. It doesn’t matter whether the prospective purchaser wants to run cattle, sheep or goats because the infrastructure can handle it.”

Ban Ban is mostly Mitchell and Flinders black soil downs country growing an abundance of natural grasses and herbages as well as some buffel. Gidgee has been thinned and there is no prickly acacia or other invasive weeds.

Both properties are well watered.

Listed at $320/ha by TopX Longreach, Waroona is being sold bare, but the sale includes some plant and equipment. Also, the successful purchaser will be given the option to purchase the existing livestock at market value. 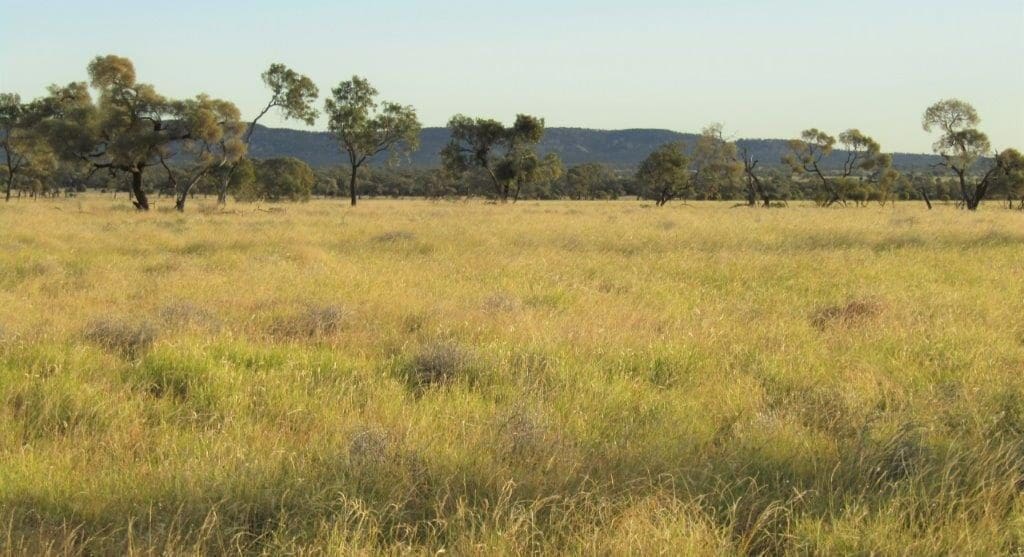 Established by pioneers Gordon & Flood in 1864, it originally spanned 777,000ha and stretched on both sides of the Warrego, from Wyandra to Augathella.

Over the years, Gowrie has been whittled away to today’s 29,204ha.

For the past 38 years, it has been owned by Noel and Jill Mobbs who until recently ran the largest Simbrah stud in Australia on the property.

The breeding, backgrounding and fattening country is located 22km north of Charleville, in south west Queensland.

Secure bounding fencing stretches for 90km and of that, 60km has been renewed in the last ten years.

The property is watered by four bores, 35km of poly pipe to tanks and 50 troughs, two turkey nests and 17 dams. It is estimated to carry 3000 breeders and followers.

Expression of interest for Gowrie close on July 26. Prime Central Queensland buffel grass country is being offered for sale via an expressions of interest campaign by Colliers International.

The EU-accredited Mitchell Park, located 15km from Capella and 52km south of Emerald, spans 1240ha and with irrigation a feature, is suitable for backgrounding or intensive silage/bunk feeding.

“Mitchell Park has had an exceptional season following recent rainfall. It is well grassed and has secure water, which means the property is virtually drought proof.”

“The irrigation will appeal to cattle producers and there is adequate infrastructure to expand intensive paddock production feeding of cattle with silage,” he said.

Since 1982, Neil and Margaret Dunbar have secured irrigation water which has provided a competitive advantage over all other dryland enterprises in the region.

The property boasts 2040ML of entitlements over three water licences. There is 1350ML capacity from the Retro and Sandy Creek dams and there is scope to build additional dam storage infrastructure. About 73 ha is covered by centre pivot irrigation.

Mr Hindman said the productive soils types are not only suitable for improved pastures, but also for various grain and forage crops.

“There is also an opportunity to repurpose the irrigation resources for citrus, macadamias or leucaena,” he said.

The expressions of interest campaign for Mitchell Park closes on August 16. There’s been good enquiry for Central Highlands grazing property Monash, which has been listed for $5.96 million by Landmark Harcourts.

Monash is located in a favourable rainfall belt and is watered by seven bores and six dams.

As a breeder operation, Monash can carry 600 head or as a backgrounding property it can run 1000 grower cattle.

It has been held for close to 20 years by Steve and Vicky Bottomley who have decided to downsize.

“Listings are tight for any sized property in the Central Highlands. That has been the case for the last two years. Interest is mostly coming from local grazing families seeking a high-quality breeder block close to their fattening operations,” he said.

There’s been good enquiry for Central Highlands grazing property Monash, which has been listed for $5.96m by Landmark Harcourts.

Meantime, Taroom district property Iluka will be auctioned on July 11 by Landmark Harcourts.

The 3185ha freehold property is well improved and located 23km west of Taroom.

The country consists of undulating brigalow and softwood scrub country, grassed with buffel and falling to fertile creek flats. Two hundred hectares are presently under cultivation.

Iluka is watered by two bores, seven dams and three turkey nests which are reticulated to tanks and troughs. Spanning 23,200 hectares, Narcissus is located 200km east of Boulia and 170km from Winton.

With a 10.5km double frontage to the Diamantina River, Narcissus is watered by numerous permanent, semi-permanent waterholes and billabongs, as well as the Fiery and Finger Board creeks.

There are three dams and water is reticulated to every paddock with a reliable solar pumping system from the iconic Old Cork waterhole in the Diamantina River.

Around half of the country consists of alluvial plains and complex flooded Diamantina Channels which grow numerous native grasses and herbages.

Narcissus can run 1000 cows and progeny or sheep equivalent, however it is currently being destocked to offer early access to the successful purchaser.

Narcissus neighbours Cambeela which is also for sale with Kennedy Rural.

The 19,236ha bullock fattening operation, which would make an ideal weaner depot, is located 175km south west of Winton.

Boasting Mitchell grass downs and Diamantina flood-out country, it can carry 1500AE and is being sold for $3m bare.

Selling agent Jack Kennedy said the two properties could easily be worked together for buyers who are in the market for something larger. Narcissus can run 1000 cows and progeny or sheep equivalent, however it is currently being destocked to offer early access to the successful purchaser.

Listowel country being sold as a whole or separately

Located 115km south of Blackall and 170km west of Augathella, the breeding, backgrounding or fattening country was originally listed by the Hirsch family in May last year.

With a diverse mix of country and soil types ranging from black soil to semi open pebbly downs and gidgee, the aggregation features flood-out country via a large system of channels at the head of the Bulloo catchment. Dominant grasses are buffel, Mitchell, Flinders, blue grass and seasonal herbages.

The property is well fenced with new exclusion fencing, as well as a dingo barrier fence.

Caranna and Lynbrydon are watered by two sub-artesian bores and 36 dams, equipped with 22 tanks and over 50 troughs, many with remote monitoring installed. There are permanent and semi-permanent waterholes in the Pleasant, Boggy, Auberg and Blackwater creeks.

Steven Goodhew from Raine & Horne Roma said the aggregation would be ideal for producers seeking scale and versatility, for breeding, backgrounding or fattening.

“In a good season, Caranna and Lynbrydon would comfortably carry 2000 cows and calves or 4000 backgrounders,” he said.

Caranna-Lynbrydon can be purchased as a whole or sold separately.

Expectations of between $5 million and $5.25 million are likely to be achieved for the Upper Hunter Valley breeding and fattening property Gibbergunyah which has been listed by Scone-based MacCallum Inglis and Sydney rural property specialists Meares and Associates.

Located 23km north west of Scone, on the southern side of the renowned Liverpool Ranges in the Kars Springs–Dartbrook area, Gibbergunyah spans 1350ha.

With fertile basalt soils, its undulating to plateaued hill country includes many sheltered valleys, an ideal coverage of shade and shelter timber with principally native pastures, and some high-performance improved pasture.

Gibbergunyah is a well-developed holding presenting with a good body of feed.

The owners have upgraded all improvements, including the two homesteads, cattle yards and 14km of new fencing. They have also implemented a virtually failsafe water supply with eight large storage tanks distributing water to troughing throughout.

Under normal seasons, Gibbergunyah is rated to carry 500 breeding cows on a self-replacing herd basis, equating to 10,000 dry sheep equivalent or 7.4 per hectare.

Gibbergunyah (land and fixed improvements) is being offered for sale by expressions of interest closing July 25. Expectations of between $5 million and $5.25 million are likely to be achieved for the Upper Hunter Valley breeding and fattening property Gibbergunyah

The Barlow family is selling its quality aggregation Nardoo, located in the heart of south west Queensland.

Comprising Nardoo, Killowen and Longlands and spanning 54,029ha, the aggregation is located 18km north of Cunnamulla and 160km south of Charleville.

Situated on a flood plain, the country comprises Mitchell grass downs and developed gidgee transitioning to alluvial channels associated with the Warrego River.

Water is secured by three capped artesian bores supplying water to a network of tanks and troughs, numerous dams and extensive frontage to the Warrego River.

Simon Cudmore from CBRE Agribusiness said Nardoo was strategically located within a highly productive region of Queensland with efficient access to end-markets and scope to implement organic production systems.

“Given the strategic location, a ready and identifiable opportunity exists to integrate the landholding within a broader supply chain providing a breeding and backgrounding function for finishing properties,” he said.

Nardoo, which has received 150mm of rain in recent weeks, has combined carrying capacity of 4000 adult equivalents or 32,000 dry sheep equivalent.

Nardoo, which has received 150mm of rain in recent weeks, has combined carrying capacity of 4000 adult equivalents or 32,000 dry sheep equivalent.

Exceptional block in the Border Rivers

There’s good local interest in the highly productive, mixed farming enterprise Quellington, which is being offered by sale via expressions of interest by CBRE Agribusiness and Leonard & Co Raine & Horne Goondiwindi.

Located in the heart of the Border Rivers region of south-west Queensland, the 2066ha property is situated 20km west of Goondiwindi and 19km east of Toobeah.

The balance of land and soil types consists of black self-mulching soils running to heavier chocolate soils with a small area of sandy ridge.

As well as cropping, Quellington is also suited to beef backgrounding and fattening on Mitchell grass, blue grass and bambatsi/buffel pastures.

It is watered by 15 permanent dams and lagoons snaking through out the property, as well a bore which supplies nine tanks and 13 troughs.

Ninety percent of the fencing has been renewed within the last four years.

The vendors John and Jenny Hurley have decided to downsize and move closer to the coast.

Expressions of interest for Quellington close on August 8. Located in the heart of the Border Rivers region of south-west QLD, the 2066ha Quellingtony is situated 20km west of Goondiwindi.