Historic shearing shed on Tubbo, which once shore 121,000 sheep in a season

More than $40 million is anticipated for the historic Tubbo Station in the New South Wales’ Riverina district.

The highly regarded sheep and cattle station (pictured above) has been held by the UK-based Pritchard-Gordon family for the past ten years.

In May 2010, previous owners the Price family’s Four Arrows Group reportedly sold the 28,170ha Tubbo Station to neighbours, Les and Gai Douglas for more than $40m (including 16 Coleambally irrigation farms), after the former corporate high-flyer Rodney Price filed for bankruptcy.

It is interesting to note that the Four Arrows Group paid $8.9m for Tubbo in 1998 from the Commonwealth Funds Management. When that deal fell over, Tubbo Station was sold in 2011 in five different parcels for more than $30m.

It can run 39,000 dry sheep equivalents on the open and sheltered riverine plains supporting productive grass and legume pastures.

The property is watered by 20km of Murrumbidgee River frontage, as well as 18 bores and dams.

LAWD senior director Col Medway said 539ha was leased to a solar farm that will generate $560,000 in income annually over the next 32 years.

Tubbo Station is regarded as one of the richest and largest grazing properties in the Riverina.

It was first established during the mid-1800s by Scottish squatter, John Peter, who managed around 20 runs spanning more than 300,000ha by 1866.

Following his death, the investment company that purchased the Tubbo run in 1887 shearing as many as 121,000 sheep, which was the third largest in New South Wales.

Tubbo was one of the few stations that managed to avoid losing much of its holdings to government subdivision and soldier settlement.

Expressions of interest close on July 1.

Between $16 million and $20 million is anticipated for prime Murrumbidgee River frontage country in the Central Riverina region of New South Wales – once owned by the late aviation baron, Sir Reginald Ansett.

The 3257ha Brewarrana, 30km east of Narrandera and 90km west of Wagga Wagga, is an historic large-scale mixed farming operation on the southern bank of the Murrumbidgee River.

With 77 percent of arable land, the property boasts an ideal platform for beef, sheep and dryland and irrigated cropping under flood irrigation that can run 25,000 dry sheep equivalents.

Held by a high-net-worth Melbourne investor since the 1980s, Brewarrana is being sold to wind up his agricultural interests in the area.

There has been overwhelming interest from family operators looking to expand, as well as corporates and high-net worths.

Recent sales in the region suggest Brewarrana could sell for $4900/ha to more than $6100/ha (for land and improvements). The water licences could raise well over $6 million.

Brewarrana is one of the most historic holdings of the Eastern Riverina and has been held by a number of respected pastoral families.

More recently, Brewarrana was purchased by Sir Reginald Ansett, of Ansett Australia fame, in 1973. He sold it the current owner in 1985.

Richie Inglis and Sam Triggs from Inglis Rural Property are handling the sale via expressions of interest closing on June 23.

The couple, who are downsizing as a pathway to retirement, have held South Bowan Park for 13 years.

It is located in a renowned high rainfall cropping and grazing district, 4km north east of Cargo and 30km south west of Orange.

Underpinned by 700mm of annual rainfall and arable volcanic soils, the undulating to low rolling hills can carry 120 breeders and 2000 ewes plus progeny, supported by 400ha of dryland winter crops.

Water on South Bowan Park is secured by bores, creeks and dams.

Ian Robertson from LAWD said there was strong interest from local family farm operators seeking expansion and from producers seeking a holding in favourable rainfall location.

“It is beautiful country that ticks all the boxes – 700mm rainfall, volcanic soils and 30km from the major regional centre of Orange. As a beef operation, producers can sow pasture and grow fodder,” he said.

South Bowan Park is being offered for sale by expression of interest closing June 24. After more than 50 years, the Gedda family has listed its Central Queensland property Markwell Station.

Situated in the Lotus Creek district, midway between Rockhampton and Mackay, the 22,168ha block is being offered on a walk-in walk-out basis with 1600 breeders plus plant and machinery.

The Gedda family balloted Markwell in 1970 and over time has developed the property into a breeding/fattening operation.

Ten years ago, breeder numbers were lifted to around 1200 and the feeder steer market was targeted.

The property has a lease providing access to the Connors River, a 30km reticulation water system and seasonal and permanent waterholes provided by seven local creeks, supplemented by 10 dams.

Richard Brosnan from Ray White Rural is handling the sale of Markwell Station which will be auctioned on June 24.

A large parcel of land in Queensland’s tightly held Wide Bay area has been listed for sale by the Lewis family.

The 1599ha Marodian West has been held for several generations and has only become available due to the dissolving of a family partnership.

Located 45 minutes north west of Gympie and 90 minutes from the Sunshine Coast, it comprises forest grazing with some hill country leading to blue gum flats.

The vendors have been developing the property over recent years, with an emphasis on clearing, maintenance and upgrading the carrying capacity. It is estimated Marodian West can run between 380 to 400 breeder units or equivalent backgrounders.

The property is well watered by seasonal creeks, dams and equipped bores.

Dan Sullivan from Sullivan Livestock and Rural Services said the property is bare of livestock and carrying a good body of feed after rain.

“There has been good interest from locals and from producers from further afield seeking good breeder country,” he said.

Marodian West is well fenced, but it doesn’t have any infrastructure. The property is being offered for sale by expressions of interest closing on July 01.

In November 2019, Bruce Angel and Gary Hill (who have a history of property development) secured the 17,650ha Rocky Springs at Mt Surprise, 400km north west of Charters Towers, for between $8 million and $9 million.

They subsequently subdivided the holding into three freehold blocks – the 9952ha Rocky Springs, the 3562ha Savannah Station and the 4106ha Byrimine Station.

In November 2020, Savannah was sold to George and Miranda Ryan from Ballynure Station near Einasleigh for $2.85m ($800/ha).

The adjoining 4106ha Byrimine Station is currently under contract.

The remaining 9952ha Rocky Springs is located next to the Mount Surprise township and features 20km of Savannah Way frontage.

Of the three properties, Rocky Springs is the only one with infrastructure – featuring a five bedroom house, a worker’s cottage, fencing (including 13km of new fencing), timber and steel yards and shedding.

Rocky Springs is watered by both below ground and surface water.

The spring-fed Elizabeth Creek provides permanent water to the property, along with multiple large waterholes, supported by eight bores and a 180mgl irrigation licence.

The country is predominantly flat to gently undulating basalt with fertile creek flats and basalt ridges.

Jez McNamara from Ray White Rural believes Rocky Springs could be further developed to become a fattening or backgrounding operation.

“The property could run around 2500 adult equivalents on pastures that have been improved with native grasses, established buffel grass, Gatton panic and stylos. Leucaena has been planted on about 40ha,” he said.

Mr McNamara said inquiry is coming from locals and producers from Cairns, Townsville, Innisfail to Bathurst in New South Wales.

Rocky Springs will be auctioned on June 25.

Located 50km from Winton, the 11,024ha Narangi* has previously run both sheep and cattle, with a carrying capacity of 1000 adult equivalents.

The property is currently de-stocked with good areas of feed ready for immediate access and is attracting interest from locals seeking expansion.

Narangi is being offered with 1975ha of stock route and features good quality open pebbly downs.

It is watered by 13 dams and tanks and semi-permanent waterholes in the Wokingham Channels.

Peter Dowling from Dowling Livestock & Property and Scott Taylor from Elders are handling the sale via auction on June 09.

* Not to be confused with Jondaryan’s Naranghi, sold this week by Elders – see this week’s recent sales report. 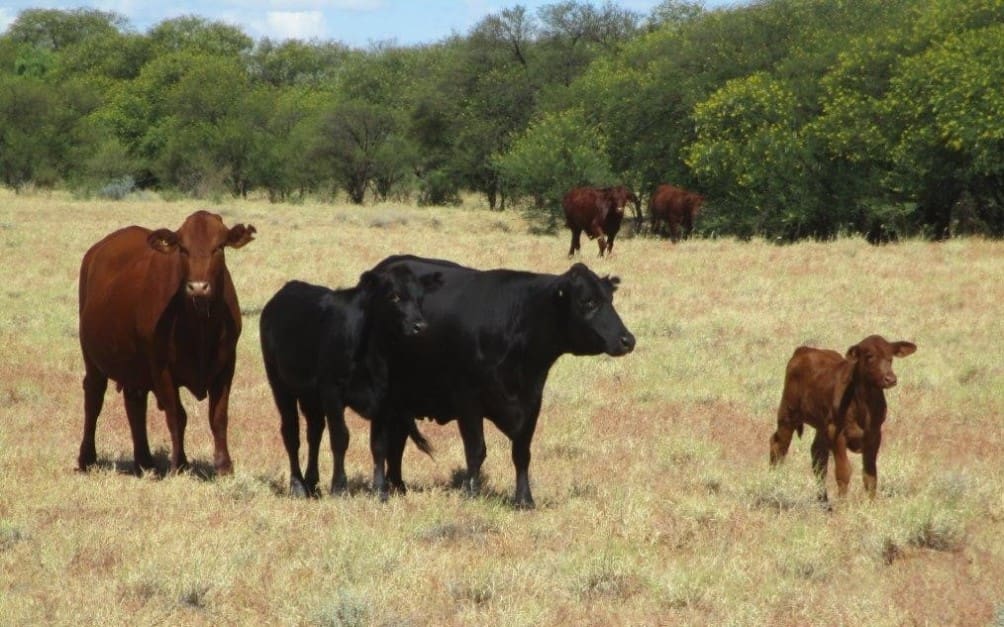 Located 50km from Winton, the 11,024ha Narangi has previously run both sheep and cattle, with a carrying capacity of 1000 adult equivalents.