Movement at the Station: Recent properties listed for sale Producers seeking scale, productivity and quality of investment will be attracted to the large-scale beef operation Brackenburgh Aggregation, 170km west of Winton in northwest Qld

THIS week’s property review includes this wrap up of on interesting recent listings across the country, and a separate article in recently completed sales of note.

Beef producers seeking scale, productivity and quality of investment will be attracted to the large-scale beef operation Brackenburgh Aggregation, 170km west of Winton, which is being auctioned by Tannco Rural Real Estate and Brodie Agencies.

Described as a modern, well-improved beef cattle enterprise, it has an excellent balance of strong grazing country, from flood-out channels to Mitchell and Flinders grass downs and soft loam saline grass country.

Tannco’s David Tannock said since the recent seasonal break, Brackenburgh had received up to nine inches of rain with beneficial flooding.

“The property is in good order and presents very well. The 25 dams are full, as are the numerous permanent and semi- permanent water holes in the Saville and Middleton Creeks and the Diamantina River. Brackenburgh Aggregation is going into winter with very good feed reserves.”

The vendors, Duncan and Lesley Lawton are rationalising the family business and retiring. They believe Brackenburgh could also be used as a backgrounding operation producing a high turnover of young cattle.

They estimate the carrying capacity at 11,000 mixed cattle in an average season or 5500 breeders plus progeny carrying steers.

In addition to his connection with Brackenburgh, Tom Brodie from Winton-based Brodie Agencies has listed a string of Western Queensland properties in a matter of weeks.

“I have never seen such a rush of listings – seven properties (Nargon, Fairlight, Luckham, Lilford, Waterview, Kyong and Brackenburgh) in six weeks, and several more in the pipeline,” Mr Brodie said.

“Local vendors are making opportunity of the feed that’s available, after a good break in the season.”

Mr Brodie said enquiry has been widespread, with hundreds of hits recorded on his company’s website.

“Northern producers are specifically looking at Fairlight (see below), but there’s overwhelming interest in the other blocks from cattle and sheep breeders, particularly in the drier areas south of Charters Towers, west of Middleton and the Northern Territory,” he said.

Among the offerings, the 16,152ha breeding or fattening property Lilford, 96km north of Winton and 192km from Hughenden, has been listed for $4.5m bare of livestock and plant.

Hosting an excellent stand of Mitchell grass and summer herbages following recent rainfall, the property has good access to the live export market in the north or the processor, feedlot and store markets to the south. Situated in a tick free area, it is estimated to carry 1660 AE in an average season.

There is no prickly acacia on Lilford, with the vendors carrying out eradication programs when required to control any fresh outbreaks coming in from neighbouring holdings.

Lilford has an impressive water infrastructure with 75km of poly pipe servicing 49 troughs and tanks. The property is being marketed by Brodie Agencies and Stockplace Marketing.

Like Lilford, Luckham, is in an ideal position to capitalise on the live export market to the north and the meatworks, feedlots and the store markets to the south. Located 80km north-east of Winton and 160km south-west of Hughenden, it is an ideal property to grow out or fatten store cattle.

Luckham is watered by bores, dams, tanks and troughs, has very little to no prickly acacia and would run 2300 mixed cattle. The 45,300ha fattening or breeding property Fairlight, 60km north of Hughenden, is well grassed and should run a large number of cattle until the next wet season.

The 45,300ha dual purpose fattening or breeding property Fairlight, located 56km north of Hughenden and 210km south of The Lynd, is very well grassed and should run a large number of cattle until the next wet season.

Boasting lightly timbered, red and black soil basalt country, it has numerous springs, permanent or semi-permanent waterholes along Cow and Fairlight Creeks. The vendors say there is the potential to either drill new bores or put in several new dams to increase the carrying capacity on Fairlight.

At present, it is estimated to comfortably run 4000 breeders plus progeny or grow out and fatten 6000 steers in an average season.

Fairlight will be offered bare of livestock, plant and equipment, when it is auctioned on June 21.

Being auctioned on the same day is the backgrounding and fattening block Nargon. Located 60km north-east of Muttaburra and 160km south of Hughenden, the property spans 10,423ha and is presently in the process of being converted to freehold.

Nargon has a good mix of lighter carrying sweet pebbly gidgee/boree country as well as heavy carrying Mitchell grass downs country running down to excellent flood-out channels. The property has a reasonable body of very high-quality pasture due to recent rainfall and being lightly stocked. In an average season, Nargon is estimated to grow and fatten up to 1200AE.

Unlike Lilford and Luckham, there is a heavy infestation of prickly acacia across a large area of Nargon. At auction, the property will be offered bare of livestock, plant and equipment.

The 17,815ha breeder block Waterview has also been listed for sale with Brodie Agencies.

Waterview is well watered with 16 dams, a bore and several waterholes along Station Creek.

There has been a good start to the season and the property is lightly stocked allowing for a reasonable body of spinifex and grass to grow. It can carry 850 breeders with replacement heifers.

Waterview is for sale for $3.1m. Around 400 breeders, calves and weaners may be available to purchaser at market value. The 17,815ha breeder block Waterview has been listed for sale with Brodie Agencies.

His latest, Chatfield is experiencing an excellent season following more than 250mm of rain, boasting an abundance of quality Mitchell and Flinders grass and water.

The 24,815ha freehold property is located 25km from Richmond and 120km east of Julia Creek. It has both tick-free and ticky status and is well suited to both fattening or breeding. The country is heavy carrying, black soil downs with a mixture of creek channels, tight pebbly ridges and open black soil plains.

The retiring vendor estimates Chatfield can carry 3000AE. While the property is being sold bare, up to 1000 head of cattle, together with plant and equipment, are available by negotiation.

With the Flinders Highway (bitumen access) running through the property, Mr Westaway believes Chatfield is a perfect breeder or feedlot backgrounding depot.

Roma’s Flagstone is an ideal additional or standalone grazing and backgrounding property that is being auctioned this Friday by Robert Brown from LJ Hooker.

The 2031ha property is a subdivision off the original Cornwall holding and is located 70km north of Roma.

It is watered by two bores and permanent water holes in the Bungewogorai Creek and can carry 400 breeders.

The owner David Keating is selling Flagstone for retirement reasons.

There is scope to develop flood-irrigated cropping on the 89,580ha cattle breeding enterprise Flying Fox Station near Mataranka in the Northern Territory, which has been jointly listed for sale by CBRE and Ruralco Property.

Available on a walk-in walk-out basis including livestock, plant and equipment, the property has a carrying capacity of 8000 head or 10,000 if fully developed.

“The property has 30,000ha of alluvial black soils (known as Kununurra clay) suited to pasture improvement and irrigation development. Independent assessments have identified the blacksoils for the development of cotton, and various seed crops. Alternatively, large areas of country could be flood irrigated to greatly extend the period of quality grazing.”

Expressions of interest are being sought for Flying Fox Station, closing on May 24. 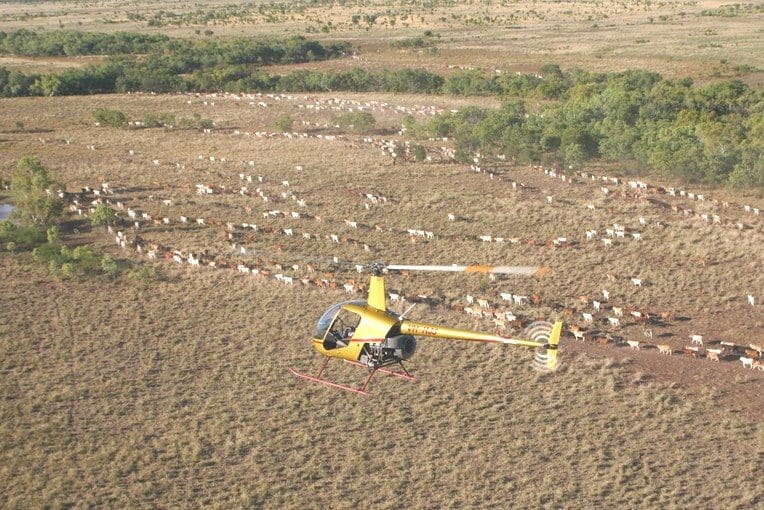 There is scope to develop flood-irrigated cropping on the 90,000ha cattle breeding enterprise Flying Fox Station near Mataranka in the NT

The Central Queensland bullock fattening depot, Redcliff, is being offered for private sale after failing to sell at auction.

The well-improved 6917ha brigalow and associated scrub country property is located 23km south-east of Middlemount, a tightly-held district. It is watered by ten dams, including eight equipped with turkey nests and troughs.

Redcliff has been owned by the Hood family since 1972, with Michael and June Hood purchasing the holding outright from their family in 1980.

Despite a good crowd, the property was passed-in at $10.2m and is now on the market with Hourn & Bishop Qld for $12m.

The highly-developed, 8381ha Roma beef enterprise Stratton is being offered for sale by Daven Vohland from Elders, after it was passed-in at auction for $8m.

Vendors Bill and Kellie McLean are selling the property for the first time in 50 years because they own country elsewhere and are wanting to consolidate. The property which lends itself to breeding or fattening is currently operating as a successful backgrounding operation.

Described as sweet grazing country with a superb mix of soil types, Stratton is well watered by bores, dams and permanent and semi-permanent holes in the Muckadilla Creek with a 10km double frontage through the property.