The historic Stanley House, situated between Kilcoy and Esk in south-east Queensland, has sold for a district record to an international party.

The iconic Brisbane Valley grazing property was placed on the market for the first time in 133 years by sibling beef producers Jane and Charles Burke, a former chief executive officer for Agforce.

The family has had a long history of producing beef. The Burke’s great grandfather took up the block in 1885 and named it after the Stanley River which ran through the property before the Somerset Dam was built in the 1950s.

Stanley House has traditionally been a breeder block, but the pair is currently backgrounding 400 adult equivalents.

It features a licenced 50-head AUS-MEAT approved feedlot and direct access to the water of Somerset Dam, including a one ML water licence. There are also four run-off dams, with most paddocks well-serviced with natural and spring-fed permanent water.

The sale was handled by Rawdon Briggs and Ben Forrest from Colliers International. No price was disclosed.

A FAMILY from Central Australia has purchased Barcaldine’s The Patrick.

Elders was considering offers above $6 million for the 16,786ha Central Western Queensland property after it was passed-in at auction in early June.

Held by the Allpass family for the past 80 years, The Patrick lends itself to breeding, growing or fattening. It could also be a trading or backgrounding depot offering excellent access to markets.

The property has a carrying capacity of 3000 backgrounders but was sold bare of livestock.

The Patrick is mainly freehold country, naturally safe, strong, shaded and developed with gidgee and bauhinia, established buffel grass, soft native grasses and herbages and edible scrub. It has been partially exclusion fenced and is watered by three flowing bores. The large-scale Thornhill Aggregation has sold for close to its $13.7m asking price to well-known Boulia beef producers John and Kate McLoughlin.

THE large-scale Thornhill Aggregation has sold for close to its $13.7m asking price to well-known Boulia beef producers John and Kate McLoughlin.

The aggregation, held by retiring owners John, Jane and Joan Lethbridge, has a combined 6000 adult equivalent carrying capacity, but was sold bare of stock and plant.

The McLoughlins have numerous properties including Roxborough Downs and Mudgerebar in north-west Queensland, Leeora Downs in the Arcadia Valley at Injune, as well as the Central Queensland property Rainbow at Rolleston.

Thornhill was listed in March by Henry Slaney from Slaney & Co and Tom McLeish from TopX and quickly attracted interest from the bigger-end of town.

At the time, Mr Slaney said Thornhill was well set up to handle large mobs of cattle with extensive water and fencing developments being completed in the last 10 years.

“With bitumen frontage via the Flinders Highway, the property can supply markets all year round, wet season or dry season enabling it to be run as either a breeding, backgrounding or trading enterprise,” he said.

Mr McLeish said the McLoughlins will background cattle at Thornhill into live export markets and feedlots. 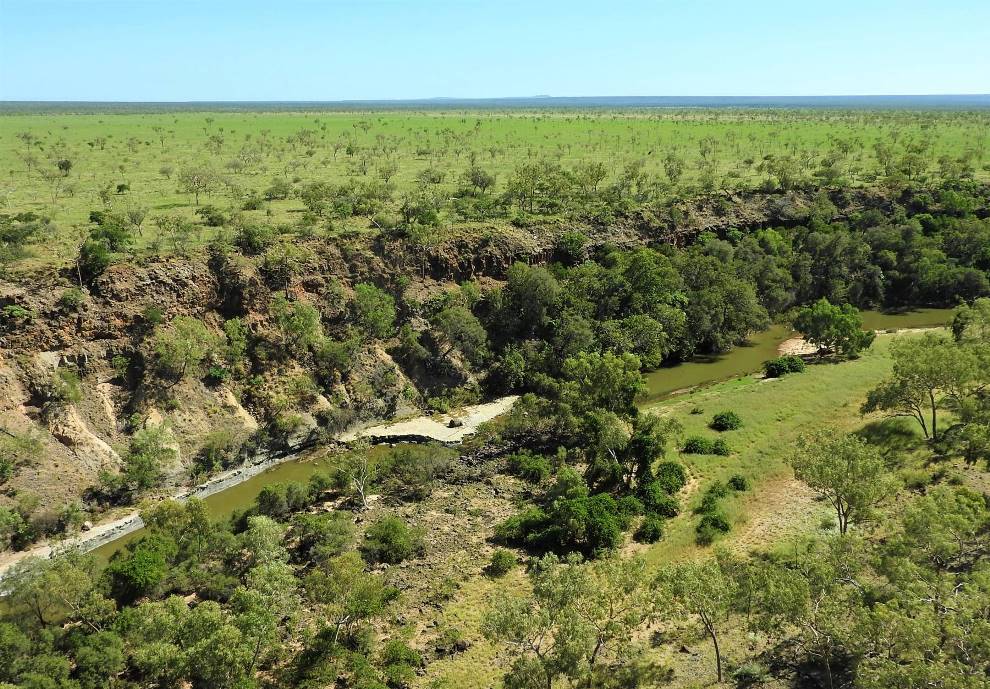 The 45,300ha fattening or breeding property Fairlight, 60km north of Hughenden, is well grassed and should run a large number of cattle until the next wet season.

IT has been a cracker year for Tom Brodie from Winton-based Brodie Agencies. This year, he has sold eight properties – mostly to neighbours for expansion, but also to producers chasing grass.

The stand out was Fairlight, a 45,300ha dual purpose fattening or breeding property, 56km north of Hughenden and 210km south of The Lynd. It exceeded price expectations of $11-$13 million, selling at auction for $14.1m bare of livestock, plant and equipment.

Buyers were Dale and Kris Appleton and family from Central Queensland who were chasing grass and breeding country.

“Fairlight boasts fertile, high quality Basalt soils, close proximity to Hughenden and is situated in a safer rainfall, low frost area. The property is very well grassed and can run a large number of cattle until the next wet season.”

Fairlight has numerous springs, permanent or semi-permanent waterholes along Cow and Fairlight Creeks. The vendors say there is the potential to either drill new bores or put in several new dams to increase the carrying capacity.

At present, it is estimated to comfortably run 4000 breeders plus progeny or grow out and fatten 6000 steers in an average season.

THE 10,423ha North Queensland backgrounding and fattening block Nargon sold for $1.75 million to neighbours Greg and Belinda Terry and Jack and Kate Terry who are expanding their grazing operations.

Located 60km north-east of Muttaburra and 160km south of Hughenden, the property is presently in the process of being converted to freehold. A large area of Nargon is heavily infested with prickly acacia which could have resulted in the slightly lower than expected $1.75m (bare) sale price.

Nargon has a reasonable body of high-quality pasture due to recent rainfall and being lightly stocked. In an average season, it is estimated to grow and fatten up to 1200AE.

NEIGHBOURS Roland and Sally Everingham have purchased the 16,152ha breeding or fattening property Lilford, 100km north of Winton and 200km from Hughenden.

Hosting an excellent stand of Mitchell grass and summer herbages following recent rainfall, the property has good access to the live export market in the north or the processor, feedlot and store markets to the south. Situated in a tick free area, it can carry 1660AE in an average season.

Lilford has an impressive water infrastructure with 75km of poly pipe servicing 49 troughs and tanks.

There is no prickly acacia, with the vendors carrying out eradication programs when required to control any fresh outbreaks coming in from neighbouring properties.

AFTER two years on the market, the 19,075ha grazing property Wongan sold to the neighbouring McMillan family for $4.6m including plant, equipment and 80 weaners.

Located 90km north west of Winton and 75km east of Kynuna, the property consists of 10,295ha Wongan and 8780ha Wybenia. It is well grassed and well-watered and can carry 1700 head of cattle.

Emily Park, located in the envied Ben Lomond area in the state’s north, has changed hands for the first time in 128 years.

The 521ha property, 30km north of Guyra and 40km south of Glen Innes, has been held by the Coleman family since 1890. Current owner Jim Coleman has decided to retire.

Dan Fittler from Elders said after spirited bidding from locals, Emily Park sold to neighbours Hamish and Anita Hunter for $4.35m or $8303/ha – in line with expectations.

It has benefited from a 60-year comprehensive fertiliser history and can carry 450 cows and calves. After spirited bidding from locals, Emily Park near Ben Lomond in northern NSW sold to neighbours Hamish and Anita Hunter for $4.35m or $8303/ha