The Greenhalgh Family, which has held Blackall’s Mt Harden since 1916, estimates the total aggregation would carry between 3000 to 4000 adult equivalent cattle season dependant, or more than 20,000 sheep.

THIS week’s property review includes this wrap-up of noteworthy recent listings across the country, and this separate article covering recently completed sales.

Central Western Queensland’s Mt Harden aggregation has hit the market for the first time in more than 100 years, with an asking tag of more than $13.8 million.

Mt Harden is watered by bores and dams and the entire property is exclusion fenced.

“The Blackall region is renowned as some of Queensland’s best sheep country,” selling agent Josh Phelps from Brodie Agencies said.

“The property is well-grassed and would suit anyone chasing feed. There has been enquiry from well-established farming families from Central Queensland through to sheep producers from New South Wales, as well as super funds and syndicates,” he said.

The Greenhalgh Family, which has held Mt Harden since 1916, estimates the total aggregation would carry between 3000 to 4000 adult equivalents season dependant, or more than 20,000 sheep.

Mr Phelps said the dedication to pest and land management was a credit to the vendors, and the consistent throughput of heavy grass-fed bullocks a testament to the quality of the country country.

Mt Harden is being offered for $407/ha ($165/ac) on a walk-in, walk-out basis, as a fully operational beef cattle enterprise with all plant and machinery included.

The approved purchaser will also have the option to purchase 1800 head of steers.

Located 70km north-west of Blackall and 50km east of Isisford, the 6300ha property boasts 9km of Barcoo River frontage as well as a capped artesian bore reticulating water throughout the property.

Conveniently located just 40km south of Katherine is the 42,400ha King River Station which will be auctioned on August 10 by Ray White Rural.

Agent Will Lehman said the property has location, water and developments.

“These factors create a unique opportunity to establish into the ever-growing northern markets and year-round road train access will enable the purchaser to take full advantage of wet season prices,” he said.

“It is currently remotely managed, but would be ideal for an owner-operator, as an expansion opportunity or for investment.”

The King River traverses the property with permanent water holes and is stockwater is supplemented by eight bores.

With adjoining properties cleared and planted to a range of hay crops, as well as tropical timbers, Mr Lehman said the successful purchaser might also be interested in using the country for mixed or intensive farming.

The nearby Venn Horticultural area is home to a variety of intensive agricultural farming crops including mangoes, melons, citrus and vegetables.

King River Station is being sold bare of stock with the herd negotiable through a separate sale. “Boasting black loam soils, it is ideal cropping, fattening and breeding country and is currently running 6000 ewes and 200 cows,” he said.

The structural improvements are excellent, and the holding has been very well managed. There is also a brand new seven-stand Eco Enterac woolshed.

The vendors are selling after 45 years of ownership. Last year, they sold country in Blackall in central western Queensland.

New Merrigal is being offered for sale via expressions of interest closing on August 22. It is being sold bare, with livestock, plant and equipment to be offered separately. Mr Clifton said it is ideally suited to mixed grazing.

“Renatto Barbieri and Charlie Wright are currently running a cattle operation with more than 1500 breeding cows, however it would be equally suited to fine wool production,” he said.

There has been extensive investment in capital infrastructure including 85km of new fencing, three near-new sets of steel and cable cattle yards and three shearing sheds strategically located across the aggregation.

The property is extremely well-watered with an annual average rainfall ranging from 800 to 1000mm and features more than 120 dams, three creeks and an 85ml irrigation licence.

Mr Clifton said the holding was for genuine sale, with the owners relocating overseas to pursue their business interests.

Glendon Park is being offered via an expressions of interest process closing on August 23. Glendon Park’s vendors are currently running a cattle operation with more than 1500 breeding cows, however it would be equally suited to fine wool production.

Two highly productive grazing properties in Victoria’s Western District have been listed for sale by CBRE.

Located at the foot of the Grampians in Cavendish, 1089ha Mokanger boasts extensive frontage to the Wannon River. Six km away is the 498ha Lewana. Together they operate as a single enterprise, principally producing superfine Merino wool.

Agribusiness agents Danny Thomas and James Beer have been appointed to handle the sale of the landmark operation.

“Mokanger and Lewana are outstanding grazing properties with an excellent history of wool production (usually between 16 to 17 microns), as well as a strong carrying capacity of around 25,000 DSE,” Mr Thomas said.

Mokanger and Lewana are being offered for sale in one line or as separate assets, including livestock, plant and equipment, on a walk-in walk-out basis via expressions of interest closing on July 26. 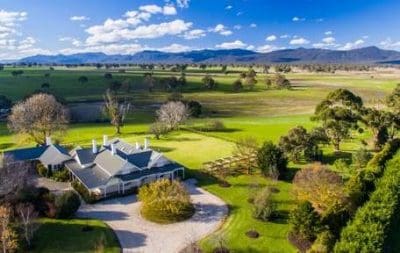 Located at the foot of the Grampians near Cavendish, Mokanger and Lewana boast extensive frontage to the Wannon River.