Located in the eastern Barossa Ranges, the 2549ha Red Creek at Keyneton and the 2047h Karinya Station at Moculta share a common boundary and have been run as a single entity for the past 30 years.

After five generations, South Australia’s Keynes family are selling their two historic sheep and cattle stations, just over an hour from Adelaide.

Located in the eastern Barossa Ranges, the 2549ha Red Creek at Keyneton and the 2047h Karinya Station at Moculta (pictured above) share a common boundary and have been run as a single entity for the past 30 years.

“They feature breathtaking scenery reminiscent of the southern Flinders Ranges, 30km of majestic dry-stone walls built in the 1860s and numerous ruins of the homes of the first shepherds in the district,” he said.

Red Creek and Karinya are well suited to livestock production, boasting an excellent balance of native grasses as well as improved pastures.

Adjacent to Henschke Winery, Red Creek is being offered to the market for the first time since the settlement of South Australia.

The large-scale grazing enterprise is located in the eastern Barossa Ranges, 5km north of Keyneton, and less than 100km north east of Adelaide.

The vendors have stocked the property conservatively and have run an operation using land-care principles, including the fencing-off of many water courses, balancing production with conservation.

The adjacent 2047ha Karinya Station, located east of Angaston and less than 100km north east of Adelaide, was established in 1919 by Colonel George Henry Dean – a soldier, stock and station agent and grazier.

The large-scale grazing property boasts a spectacular landscape and features a combination of productive arable land and hilly grazing country with scenic gorges and seasonal watercourses.

The centrepiece of Karinya is the beautifully appointed 100-year-old homestead.

The iconic holdings are being offered separately for sale by expressions of interest closing on September 10.

The exceptionally well-watered breeding block is located 140km south east of Weipa, boasting an average annual rainfall of 1600mm thanks to a guaranteed wet season.

The Watson River and Merkunga and Kurracoo creeks run through the property. They contain significant waterholes which flood over into lagoons adjacent to the waterways.

The 89,000 hectares of well-grassed, undulating country is currently running more than 2400 quality Brahman breeders which are included in the sale.

Cameron and Doreen Quartermaine purchased Watson River as an undeveloped block in 1985. They have now decided to downsize and relocate to the Atherton Tablelands.

Bram Pollock from Colliers International said while it is early days, there has been good inquiry.

“Cape York country doesn’t come to the market very often, which has resulted in good local interest, particularly from Cape York and Queensland’s north eastern region, with some inquiry from southern buyers around Roma,” he said.

Interest could also come from the neighbouring Arukun (Aboriginal and Torres Strait Islander community) or from mining company Rio Tinto – with its Far North Queensland operations based at Weipa. An additional passive income of more than $100,000 per annum is driven from the carbon offset scheme via Savannah burning offsets, as well as hay sales.

The enterprise also offers development opportunities and has the potential for low impact tourism.

The EOI for Watson River closes on September 22. The 89,000ha of well-grassed, undulating country on Eatson River is currently running 2400 quality Brahman breeders which are included in the sale.

Gulf breeding and fattening on Nardoo

Tightly held Gulf breeding and fattening country will be auctioned by Ray White Rural on September 11.

The 97,500ha Nardoo, situated 280km northwest of Cloncurry and 95km west of the Burke & Wills Roadhouse, is being sold on a walk-in walk-out basis with plant and equipment.

The property is described as an excellent balance of country with heavy black soil Mitchell grass downs and Leichhardt River frontage running back to open forest.

Nardoo is also watered by numerous other creek systems that have permanent and semi-permanent waterholes, as well as 10 bores.

Over the last six years, there has been a major upgrade of the property’s structural improvements.

Nardoo has been owned for the past 10 years by Peter and Ann Woollett who have purchased country elsewhere.

It is estimated to carry 8000 breeders with progeny to weaning, and selling agent Bill Seeney said Nardoo would suit large-scale producers seeking a breeding property. The 97,500ha Nardoo, situated 280km northwest of Cloncurry and 95km west of the Burke & Wills Roadhouse, is being sold on a walk-in walk-out basis with plant and equipment.

One of the best breeding or fattening blocks south of Hughenden has been listed by the Delahunty family.

It is one of the original holdings in the district and has been owned by the Delahuntys since 1986.

The property features mostly open downs and channel country and is presenting with a good body of pasture which responded well following rain earlier this year.

Rockwood is well known for producing heavy cattle and the vendor is confident the property will carry 2000 young cattle through to the end of the year.

It was once a bullock fattening property for Tancreds Meat Company, and prior to that formed part of the renowned Scottish Australian property portfolio.

The country comprises mainly open downs with self-cracking clay soils, mixed with gidgee pebble ridges throughout. The country is well watered by Landsborough Channels and the Jerkins, Kybona and Breakfast Creeks.

Described as low cost and efficient, Rockwood Station is being sold by Simstock Rural Agencies and Wharton & Co. 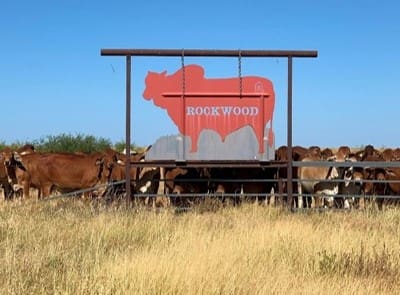 Rockwood is well known for producing heavy cattle and the vendor is confident the property will carry 2000 young cattle through to the end of the year.

Some of the best frontage country on the Maranoa River is being sold by Geoff and Jacque Blacket after 80 years of single-family ownership.

The couple has decided to downsize and offload their large cattle breeding and backgrounding operation Tamanick after selling their other Mitchell property, the 16,187ha Marlee Downs, for $2.6 million($160/ha bare) in June.

Tamanick is situated 83km south of Mitchell and 130km north of St George, in southern Queensland.

Featuring a balance of soil types and exceptional stands of buffel and natural grasses, the 13,918ha of country consists of 6339ha Tamanick, 2023ha Myola, 2021ha Feniton and 3690ha Farmers.

The property is subject to flooding, but the homestead and structures have a levee bank set above the 2012 flood height.

Around 1620ha of low-lying flood grazing country that straddles the Maranoa River is reputable cattle fattening country that is extremely beneficial in times of increased rainfall or flood times.

Tamanick can carry 1300 cows and calves, or around 2200 weaner-to-feeder cattle.

The property is also watered by seven dams, two semi-permanent lagoons, seasonal water holes in the creeks and river plus an equipped bore.

Seamus Filan from MAA Livestock & Property is handling the sale of Tamanick, which is being sold as a whole via an expressions of interest campaign.

Standout Maranoa holding Tomoo, in Queensland’s south west, has been listed with a $10 million price tag by Colliers International.

Owned by Dean and Theresa Willaton since 2003, the property is located 85km south west of Mitchell and boasts an excellent body of feed.

“Currently used as beef cattle enterprise carrying 1650 cows and calves, or 2500 adult equivalents, Tomoo could be further enhanced by goats and a dorper sheep operation.”

The country is well-developed with around 80 percent cleared and sown to improved pasture or pulled for mulga browse.

The boundary fence is an exclusion fence located within two exclusion cluster fences, allowing Tomoo to benefit from being double fenced.

Tomoo is watered by the Mungallala Creek that runs through the middle from north to south. There is also a 2018 drilled bore that services most of the property, together with 23 dams and 40 troughs.

The contiguous 1271ha Beanbah and the 1407ha Edale are suited to sheep, wool, cattle and cropping.

Located 32km north of Coonamble and 195km north of Dubbo, the properties have been run and managed as a single agribusiness enterprise by Charlie and Marg Beck.

The couple hold country on the eastern side of Coonamble and have decided to downsize.

The 2678ha consist of heavy grey self-mulching soils and a band of red clay to sandy loams.

Situated on the Mowlma Creek, the properties are also watered by two capped and piped bores.

Richard Gemmell from Elders Central Western NSW said there had been good interest for Beanbah and Edale, which are being offered for sale as a whole or as two separate contingent holdings.

Expressions of interest close on September 18, with an extended settlement offered through to the end of February.

Producers seeking a breeding or backgrounding block are inquiring after Ceda Valley, situated between Rockhampton and Mackay in central Queensland.

The 482ha property at Clairview, 75km south of Sarina, features fertile alluvial, volcanic and scrub soils making it quick to respond to rain.

A large percentage of the country has been cleared and sown to improved pastures, with the remainder open forest country to rainforest.

Some of the paddocks produce hay. Last year, the property produced two semi loads of round hay bales, while running the maximum number of cattle.

While there is no price guide for the block, Ceda Valley is expected to sell for around $8000 per beast area.

Ceda Valley will be auctioned on September 17 by Gary Johns from Nutrien Harcourts. Escape to the Capricorn coast

There has been good inquiry from central and western Queensland producers for a holiday home boasting absolute beach frontage on the Capricorn Coast.

Kevin Doolan from The Professionals at Emu Park has listed the largest beachfront lot in Cooee Bay, near Yeppoon, a popular holiday destination for producers, with the neighbours a well-known family from Dingo and Duaringa.

The 680 sqm north facing property, overlooking the Pacific Ocean, features a three bedroom house with timber flooring, and a sleepout with a large open rumpus/lounge downstairs. Kevin Doolan from The Professionals at Emu Park has listed the largest beachfront lot in Cooee Bay, near Yeppoon, a popular holiday destination for producers