THIS week’s property review includes this wrap-up of interesting recent listings across the country, and a separate article covering recently completed sales of note. More than $30m is anticipated for the 221,408ha Jubilee Downs in Western Australia’s Kimberley, being offered with around 11,500 Droughtmaster cattle.

More than $30 million is anticipated for the 221,408ha Jubilee Downs in Western Australia’s Kimberley, being offered with around 11,500 Droughtmaster cattle.

Located 90km from Fitzroy Crossing, Jubilee Downs, pictured above, was settled in 1880 by the McLarty and Rose families.

Today, it is owned by the Jubilee Downs Pastoral Co formed by Texas billionaire and environmentalist Edward Bass and Keith and Karen Anderson.

Jubilee comprises Quanbun Downs which was acquired in 1975 and Jubilee Downs which was purchased in 1987. The two are run as one entity under the stewardship of the Andersons.

Around half the property comprises various forms of alluvial plains and/or river system rangelands, with the balance mainly Pindan country with woodlands and shrublands.

The Fitzroy River northern branch runs through the property, while the southern branch forms the property’s south boundary. In total, Jubilee has almost 90km of river access, with some huge pools of permanent water.

Greg Smith from Elders said the vendors are to be congratulated on their rangelands management and dedication to breeding quality Droughtmaster cattle.

“The Anderson’s management has been recognised by the North Australia Beef Research Council with Keith Anderson taking out a ‘Producer of the Year’ award, a well-deserved recognition of his commitment to the cattle industry and outstanding management practices.”

Mr Smith said the cattle on Jubilee were magnificently bred.

“The Droughtmasters have an excellent reputation for performance and are highly sought after by live exporters, feeders and processors,” he said.

The sale of Jubilee Downs is likely to attract corporates who are already established in the Kimberley. Here are some potential suiters:

Due to COVID-19, the expression of interest process for Jubilee Downs will be conducted in two stages, with the first closing on June 4.

Elders is asking $18 million for one of southern Queensland’s most historic pastoral aggregations.

The iconic Terrica Aggregation spanning 15,990ha is to be offered as a whole or in two contiguous holdings – the 7005ha Terrica Station and the 8985ha Currajong.

The property was once part of the admired CSR Pastoral group of properties.

It was settled in the mid-1800s by the influential pastoralist and pioneering McLeod family whose purebred Merino stud became renowned for its superfine wool production.

In fact, the McLeods hosted numerous government officials and members of British Royal Family during their ownership of the property.

Ideally suited to grazing, sheep have traditionally continued to be the station’s main enterprise, with diversification into beef cattle in later years.

In 1982 Currajong was purchased by Rick and Louise Goodrich and in 2004 they acquired Terrica Station.

Continuing the legacy of fine wool production, the owners successfully maintained and developed the property to uphold the fine reputation as one of southern Queensland’s leading pastoral enterprises. In the early 2000s, the Goodrich family produced a record $1m bale of 11.9 micron ultra-fine wool.

Key features of the Terrica Aggregation include a classic five-bedroom Federation style homestead circa 1907, 355 tonnes of grain storage and 109km of newly constructed exclusion fencing.

In 2014 the property was acquired by the current vendor LCP Terrica, owned by William Lempriere and Stirling McGregor who co-chair Lempriere Capital (a corporate advisory and private investment group).

Terrica Aggregation has been listed for sale with Nick Myer and Andrew Williams of Elders Real Estate, with expressions of interest closing on June 25. The Terrica Aggregation spanning 15,990ha is to be offered as a whole or in two contiguous holdings – the 7005ha Terrica Station and the 8985ha Currajong.

Roy Chisholm, the former owner of Napperby Station, is offloading the two freehold production properties as a package on a walk-in, walk-out basis.

They are situated 13km apart in the Ti Tree region and are two hours north east of Alice Springs.

The area is considered as one of the most controlled crop growing environments of Australia. With plenty of sunshine and warmth the growing seasons are longer, growing time is shorter, controlled watering, minimal weed and pest control is required and biosecurity is optimum.

The 1047ha Oolloo Farm, with a ground water extraction licence of 1000 megalitres, has 154 hectares under six newly installed pivots that allow the operator to monitor each remotely.

Mr Chisolm, who has owned Oolloo Farm and Territory Grape Farm since 2017, said they are highly efficient and streamlined fodder production operations.

Fodder production has been underway for just under five years. Combined, the two properties produce about 15,000 tonnes of a fodder a year supplying Northern Territory pastoral properties extending south of Alice Springs and north to the Katherine region.

Olivia Thompson from Landmark Harcourts said the soil types and the available irrigation water provided an endless range of agricultural or horticultural pursuits, which may wish to be undertaken as further production opportunities.

Expression of interest for the Oolloo Farm and Territory Grape Farm close on May 28. 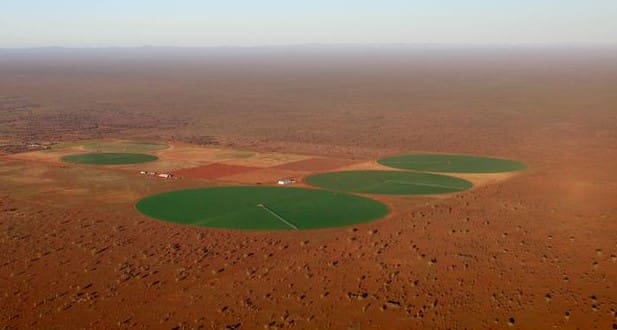 More than $10 million is expected for a prominent grazing and farming operation in Victoria’s Murrindindi region.

The property, located near Gobur, 160km north of Melbourne, has been run by three generations of the Lane family since 1970.

Formerly home to the Kaloomah Hereford Stud, the country is suited to cattle, sheep, cropping, horticulture or equine pursuits. The carrying capacity is estimated at 13,000 DSE.

An abundance of water is supplied by 44 catchment dams, 166,000 litres of rainwater storage and dual frontage to Middle and Godfrey Creeks.

Kaloomah is being offered as a whole by Elders, with expressions of interest closing on May 28. There has been steady inquiry from across eastern Australia for the Maranoa backgrounding property Boondarra which has been listed for $10.4 million.

“Boondarra can carry 1250 backgrounders, 250 breeders plus 1000 sheep and goats. The most likely buyer will be a grazing family looking to expand, a northern cattle producer looking for fattening or finishing country, or a sheep producer,” he said.

The country has a reasonable level landscape, with 6879ha densely grassed with buffel, Mitchell and Flinders grasses along with herbages.

There is 404ha of Tartulla Creek country which floods out in larger floods.

Most of the fencing has been renewed in the last 10 years, with all but 8km exclusion fenced.

Vendors Louwrens and Emma Smit have been running Boondarra as a backgrounding operation, but have decided to retire and return to Western Australia. There has been steady inquiry from across eastern Australia for the Maranoa backgrounding property Boondarra which has been listed for $10.4m.

There has been strong inquiry for Quilpie’s Yambutta, a south west Queensland grazing property with a strong local reputation.

Yambutta is situated 70km west of Quilpie on the Grass Hut Channels which flood into the Kyabra Basin.

Spanning 41,083ha, 70 percent of the country is soft, open and lightly shaded grass country and watercourses.

The red, grey and black soils grow a diverse mix of natural grasses combined with productive herbages in season.

Darryl Langton from Nutrien Harcourts said there had been good interest from locals and producers from Queensland and the southern states.

“Yambutta is a diverse property that can run cattle or sheep or a mix of both. There haven’t been many large-scale western Qld properties change hands in the last 12 to 18 months, so the auction process will determine the selling price,” he said.

Yambutta will be auctioned by Darryl Langton from Nutrien Harcourts on July 13. There has been strong inquiry for Quilpie’s Yambutta, a south west QLD grazing property with a strong local reputation.

The Langlo River breeding, backgrounding and fattening property Nungil, in Queensland’s south west, will be auctioned on June 17 by Elders Real Estate.

There are about 2225ha of low edible mulga (with a good area of standing mulga reserves) and 405ha of highly productive flooded lake country.

There are also four sub-artesian bores, as well as 31km of new boundary fencing and 30km of new internal fences.

Selling agent Keith Richardson said Nungil has had a good summer and is presenting with a good body of feed after 230mm since Christmas.

After 39 years on Nungil, Rob and Robyn O’Sullivan are selling to retire. The property is being offered bare of stock and plant. The Langlo River breeding, backgrounding and fattening property Nungil, in Queensland’s south west, will be auctioned on June 17 by Elders Real Estate.

Louise Harris from Barraba in northern New South Wales has decided to downsize and sell her southern Queensland operation Whyenbirra.

Louise and her late husband Wilf ran the Kaputar Pastoral Co – a Wagyu stud (based in Barraba) and a commercial Wagyu operation across their properties in Queensland and NSW.

The Harris family used Whyenbirra predominately to grow out their yearlings and for additional breeding.

The fully exclusion fenced property offers safe and reliable bore water, and a mix of buffel and flood-out country.

Suited to cattle, sheep and/or goats, the 14,357ha holding is situated 60km south of Bollon and 130km south west of St George.

The country comprises 75pc deep red loamy soil and 25pc deep grey flood-out country, which benefitted from recent flooding from the Wallam Creek and carries a large body of fresh feed. Water is a feature with the Whyenbirra share bore suppling five properties, as well as 18 tanks and 38 troughs.

In season, Whyenbirra has carried up to 1500 cows. Over the past 12 months it has been destocked and has recovered from drought with an excellent body of feed, predominately buffel and herbages.

Ruralco’s Nick Dunsdon said there had been good inquiry from locals and other parts of Queensland for expansion and for breeding and backgrounding country.

Whyenbirra will be auctioned online on June 18. Suited to cattle, sheep and/or goats, the 14,357ha Whyenbirra is situated 60km south of Bollon and 130km south west of St George.

Tightly held Diamantina Channel Country will be auctioned bare by Kennedy Rural on May 29.

“It features 3644ha of Cadell and Diamantina Channel system, which is renowned fattening country capable of growing fattening feed from beneficial flooding without rain,” he said.

Owned by Les and Margaret Deen for almost 20 years, the sale of Cambeela will enable the couple to retire. Situated near Keera, 45km from Bingara and 76km from Inverell, the two contiguous landholdings – 1930ha Niambar and 850ha Allambie – are low-cost breeder operations currently operated as a beef and sheep enterprise.

Together they have a demonstrated carrying capability of up to 4700 dry sheep equivalents plus rangeland goat harvesting, with scope for further development.

Water is provided by nine bores supplying a network of tanks and 21 troughs, backed by 20 dams and two semi-permanent creeks.

Niambar and Allambie, owned by Marlene and Karl Dehaen, adjoin the 1724ha breeder block Cluny which is currently on the market with Moree Real Estate for $4.26 million ($2471/ha). Together they once formed part of Bingara’s historic Keera Station.

Niambar and Allambie are being offered for sale by expressions of interest closing on June 11.