Movement at the Station – A roundup of rural property briefs

The buzz surrounding the use of drones (unmanned aerial vehicles) in agriculture continues, and it’s hard to think of a better application of the technology than in aerial photography used for property marketing purposes.

The use of drone-based aerial video photography has come ahead in leaps and bounds since it was first pioneered in rural property marketing just over a year ago.

Take a look at the magnificent production qualities in the example below, which presents to the viewer more like a cinema experience than something designed to find a buyer for a cattle property.

This example was put together for Colliers’ Dooloogarah listing north of Roma, but there are plenty of others worth viewing.

While this particular footage was shot by a specialist UAV pilot, recent regulatory changes are putting smaller camera-equipped UAVs within reach of property agents and marketers themselves. Indeed, several Queensland property agents already have a drone in the boot of their car – and frequently use them.

Recently Australia’s Civil Aviation Safety Authority announced changes relieving much of the regulatory burden that previously surrounded the use of drones. The amendments, coming into effect in late September, introduce new categories better suited to this type of application.

The regulations define new low-risk commercial RPAS operations, which will allow operators of sub-2kg craft (like property agents and marketers) to fly without the need for an approval or licence.

“Given that cattle prices are at historically high levels and the national herd size is shrinking, restocking is a notable expense,” the review says, with considerable understatement.

“Therefore, properties offered to the market on a walk-in, walk-out basis represent the potential to acquire a herd without the high costs associated with freight and the complexities involved in purchasing new stock. As a result, properties offered with stock included are expected to attract significant interest this year.”

The report claims demand for such holdings is not only from domestic investors, but also from international investors, supply chain participants and institutions.

“Stock numbers has had had a significant impact upon property sales over the last year, with some considerable assets exchanging hands in the last 12 months.”

The strong international demand for beef products can be seen to have a significant impact upon investors wanting to access the beef-producing market, according to Colliers.

“New South Wales beef cattle properties – particularly those in close proximity to Sydney and major regional centres – will be the most sought-after assets by agribusiness investors in 2016,” the review suggests.

Mixed seasonal fortunes so far this year in Central Queensland is having some bearing on property marketing, a recent valuer commentary suggests.

In its most recent April monthly rural property review, Herron Todd White says areas to the north of the Capricorn Highway towards Middlemount, Moranbah and across to Clermont received good rainfall in early March after a relatively late start to the wet season.

Some areas that had received good rainfall leading up to Christmas have in turn had little follow up this year. At time of writing, areas around Wowan, Theodore and across to Taroom are starting to look quite dry,” HTW’s review said.

“If rainfall is not received soon in these areas it is likely that graziers may have to start selling down stock or look for agistment in areas that have received more favourable conditions. This may even lead to some ‘grass’ sales of properties.”

Despite areas to the north of Winton receiving some fairly general rainfall, unfortunately graziers further south around Longreach are yet to receive any significant relief this year. 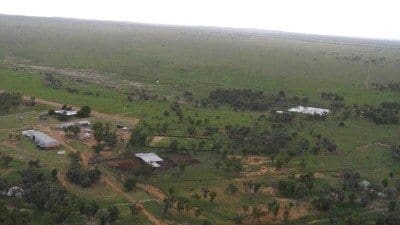 HTW valuer Michael Chaplain said as expected, there had been a number of properties hitting the market in this region in recent times including Dalmore (6582ha) and Dillulla (8235ha) around Longreach, and Kywong and Rangelands around Winton. Dalmore was sold under the hammer last month for $1.705 million, or $105/ac, while Dillulla was passed on a fortnight ago for $2m. Kywong was passed on on a vendor’s bid of $2.6m.

“A notable recent western sale is that of Newstead (12,251ha, east of Longreach) which has reportedly sold for $314 per hectare ($127 per acre), after being passed in at auction slightly below that level late last year,” Mr Chaplain said.

Newstead is a well improved Mitchell Grass downs block, however it had limited pastures reserves at the time of sale.

Muyong (9480ha, north of Longreach), also with limited feed reserves, recently passed in at auction for around $263 per hectare ($106 per acre).

“These rates for western downs country appear to show a strengthening of values from previous sales over the past 12 to 24 months. It will be interesting to see if these recent value thresholds are sustained if and when transactions take place on the current listings,” Mr Chaplain said.

Heading east into the Central Highlands, Albinia (19,229ha, northwest of Clermont) was sold soon after auction last month for $11.5m, providing a good test for the level of demand for larger scale grazing country in this location.

HTW said the last sale of a larger-scale property near this location was Bungobine (37,536ha, north of Mount Coolon) in mid-2015 for about $19.5 million reflecting a rate of $410/ha. Bungobine was purchased by a well-established local grazier and was generally considered to be sound buying at the time.

Heading further south-east into the Dawson Valley region, Warrenlea (3447ha, west of Moura) was sold soon after being passed in at auction earlier this month for $5.775m, providing a good test for current demand for premium scrub and forest country.