Faversham, the 5450ha centrepiece of Crown Estate’s Upper Hunter grazing portfolio, has been placed on the market.

The holding is currently used to breed and background Wagyu F1 cattle and has a carrying capacity for 1200-1500 breeders plus progeny. Recent land sales in the Merriwa district have ranged from $3300/ha to $4400/ha, with Faversham expected to attract a premium based on its high rainfall, high carrying capacity, close proximity to Sydney, size and quality. Crown State Pastoral controls about 8400ha of country in the Upper Hunter, including Faversham (pictured above), Montego, Chatham and Moona, most of which was once part of historic Brindley Park.

The company is controlled by Sherwell Holdings, a company based in the British Virgin Islands. Its directors are Los Angeles-born Jon Choi who is also managing director of the Crown State group of companies, and Hong Kong-based William Choy.

Extensive buildings in Faversham include four main houses, two separate cottages for paying guests or other ventures and a six-room shearers’ quarters with its own kitchen. There’s also six-stand and two-stand woolsheds, three sets of cattle yards, two sheep yards, two silos and five machinery sheds. About 100 hectares are under oats and barley for finishing livestock. Water comes from the Merriwa River and tributaries, as well as bores.

Demand for northern Australian cattle properties in locations that can provide staging-posts between more remote breeding holdings and coastal live export port facilities has been conspicuous over the past two years.

This week, another prospect that ticks that box among its key features has been placed on the market. Aroona station is a 147,000ha of grazing country southwest of Katherine towards Timber Creek, on the Victoria Highway. Open country on Aroona, southwest of Katherine, which is being offered with 14,000 cattle

Being located 390km south of Darwin on the all-weather bitumen road may attract interest from stakeholders looking to build their supply chain with convenient access to the Port of Darwin.

The country is in the transition zone between the top of the Victoria River District’s black basalt, and the east Kimberley’s red country.

The Aroona offering includes 14,000 head of branded cattle, giving capacity to hold large numbers of cattle pre-export, as well as breed in its own right. The country is in excellent shape after the winter, and cattle are in very good condition for time of year.

A well-developed irrigation farm near Emerald on Queensland’s Central Highlands is being put to the market. The Brosnan family has decided to see their 341ha holding, Emerald Downs, after 24 years of ownership.

Located adjacent to the town of Emerald, the farm includes 280ha fully-developed for furrow irrigation, with an extensive network of supply channels, head ditches, tail drains and recycling sumps. About 100ha of planted cotton is included in the sale. 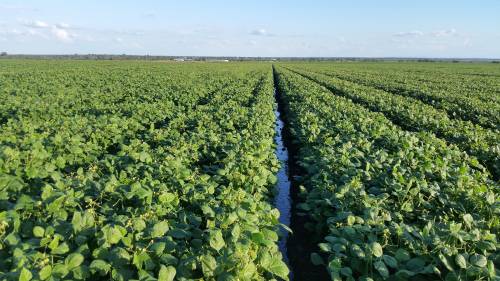 There is also a 280 megalitre storage dam which is filled from overland flow and recaptured tail water. A licensed storm water diversion agreement is associated with this storage. An additional 20ha of dryland cultivation could be developed to irrigation.

Emerald Downs draws its allocation from Fairbairn Dam, one of the most reliable in Australia. The announced allocation is 100pc for this water year.