A rural property agent says changes to tenure arrangements announced by the Queensland Government last week are already having a positive impact on demand for leasehold cattle properties in the State. 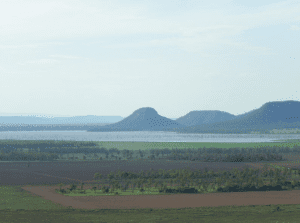 Rainbow in the Arcadia Valley near Rolleston. Click on picture to view in larger format

Reforms passed by the Queensland Parliament last week, which followed three years of lobbying from AgForce Queensland, have provided leasehold title holders with greater security of tenure by allowing them to invest confidently in properties knowing their leases will be renewed on a rolling basis.
The legislation introduced by deputy premier Jeff Seeney also reduces land rental charges and makes it easier and more affordable for leaseholde titleholders to convert their title to freehold. (For more information about the reforms read last week’s Beef Central’s article here)

Rainbow (5122 hectares) was one of three Arcadia Valley properties offered for auction bare of stock and plant in late April by John and Kate McLoughlin. The McLoughlins also own properties in Queensland’s Channel Country and near Katherine in the Northern Territory and have decided to sell their central Queensland holdings in order to expand their operation in the north and to focus on the live export trade out of Darwin.

One month after the auction Rainbow remains unsold, however Mr Etheridge said last week’s move by the Queensland Government to grant greater security of tenure to leasehold title holders and an improved ability to convert leasehold titles into freehold had triggered increased interest in the property.

‘The Government is going to make it easier and more affordable for people to freehold, and that has changed the thinking for a few people’

“Now the Government is going to make it easier and more affordable for people to freehold, and that has changed the thinking for a few people.”

Mr Etheridge said negotiations were now at an advanced stage on Rainbow and a result was likely soon.

Leeora Downs has been held by the McLoughlin family for more than 50 years, having been drawn by John’s late father Vince McLoughlin in the Lands Development ballot following the Arcadia Valley Brigalow development scheme and sub-division in 1963.

Mr McLoughlin said the decision to sell land that had been long held by his family was bittersweet, but the family had made a strategic decision to sell its southern most country in order to centralise its existing cattle operation towards Darwin.

“The live cattle export ban affected the export and domestic cattle markets severely, and like many producers, we had to consider better ways to utilise our investments to suit the situation – hence the decision to sell our three southernmost holdings,” he said.

“We expect live exporting will flourish in the years to come, underpinning the security of this land well into the future.”

Commenting on the sale of Lotus Vale and Leeora Downs, Peter Etheridge said it had been encouraging to see local pastoralists stepping in to buy more country.

Both properties sold at a price of around $700 per acre, which is well down on the $1100/acre prices some Arcadia Valley blocks were fetching at the peak of the last price cycle six years ago, but above the $570/acre another Arcadia Valley property sold for earlier this year.

“They are both family pastoralists who bought them which has been interesting, there has been a little bit of gas money around, but these buyers were bullock fatteners and cattle breeders who are expanding so that was encouraging,” Mr Etheridge said.

Lotus Vale and Leeora Downs are two of only four properties in the Arcadia Valley sub-division that have a permanent water hole on the Brown River, which provides a valuable back up to dams.

In marketing the properties CBRE’s Geoff Warriner nominated the aggregation’s quality structural improvements and central location in one of Queensland’s premier agricultural regions as key selling points, and also its close proximity to the tick line, which provided ease of movement for northern cattle travelling to southern markets.

Over the 2012/2013 year, the combined 12,000ha Leeora Downs, Lotus Vale and Rainbow aggregation collectively turned off in excess of 10,000 head of grown cattle.