Has the rural property market bottomed? 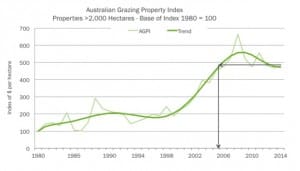 The slide in rural property values triggered by the Global Financial Crisis six years ago may be finally at an end, a Herron Todd White rural property breakfast in Brisbane was told last Friday.

HTW rural valuation specialists covering regions from the Northern Territory to southern Queensland were all in agreement that the market in their respective regions appears to have bottomed.

Sales volumes were increasing which was causing property values to stabilise.

“In the last 12 months, our trend line (for 2000ha and above) in terms of 1980-2014 has run up, it has levelled off, and we are now starting to trend sideways in terms of the actual underlying median price value,” HTW national rural director Tim Lane said.

Interestingly each of the representatives for the four regions discussed – NT, NQ, CQ and SQ – also tended to agree that prices have landed at values that were last being written in 2005-2006.

In the words of HTW’s Darwin based specialist Frank Peacocke, this, assisted by the solid supply/demand outlook for beef prices, meant that now “was probably the best time to buy a property in the last 10 years”.

Agriculture was also starting to be recognised as a legitimate asset investment class by the institutional funds, which was causing more capital to be reallocated to the sector.

“If you look at long term bond yields across global bond markets, agriculture at 2-4pc gross yield is looking pretty good, compared to some of those bond prices at the moment,” he said.

Mr Lane said buyer interest was not isolated to just one commodity or to one region, but noted that a strong swing back towards livestock was also evident.

“Then were saw more of an influence towards the cropping sector, so money came into that sector and there was a change of sentiment to a large degree for the last four or so years.

“But now there is more interest, more inquiry, more phone calls are ‘we have got a client, they have got cash, they want a 20,000 head breeder block’ type inquiry.” 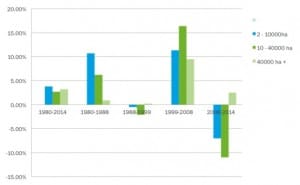 It was also important to note that most of the ‘noise’ or activity in the cattle market at present was for properties with scale, Mr Lane said.

“The money is coming for the scale of the asset,” he said.

“Unfortunately the mum and dad market, the starter block market, the investor lower end, the reality is that is still largely dominated by debt and it is still actually showing negative trends in terms of values at a broad level nationally.

“But the larger scale assets are starting to show that transition.

“What this starting to represent is further separation between the big end in terms of value ranges and the sub-institutional class assets, say $15 million and down, that trend is showing the gap widening in the value streams.”

Overall, Mr Lane said price trends for rural property were likely to track sideways for the next few years, with a continued divergence occuring between corporate and family scale properties. 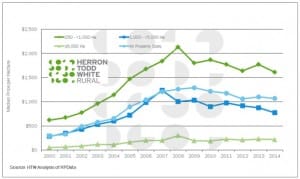 In Southern Queensland, Toowoomba based HTW representative Doug Knight said the median price of rural property in 2014 was $1235/hectare, down from $1512/ha in 2008.

“I feel we are at, or close to, the bottom of the market right now,” he told the audience.

Prior to the pre-GFC peak in 2007-08, an average of 555 property transactions were recorded in Southern Queensland per year.

Since that time, the average number of annual sales has dropped to 323.

“We feel the market in Southern Queensland is probably in a better place now than 12 months ago,” Mr Knight said.

“However, we don’t see it transferring into any value growth yet, that could still be some time away, but we have got to have market activity and we are fielding that inquiry now, it is a lot better situation than previously.”

In Central Queensland, Will McLay from HTW Rockhampton said the $10m plus market in the region had been quite resilient, but in general the region’s property values appeared to have settled at levels last being paid around 2004-2005.

There had generally been a reduction of between 5-30pc from peak values, however where forced sales had occurred, price reductions had been in the vicinity of 40pc of more.

The Moura/Rolleston scrub market was the most active market in the region, with properties trading around the $750/acre level. The Alpha market had also seen a number of recent sales at the $300/acre level.

Continued drought and lack of grass in the Central west meant that region was still experiencing a very tough market.

“Overall my view is that values have stabilised,” Mr Leahy told the audience.

“The volume of sales has increased slightly, and I think the positive outlook for beef will assist the market going forward.”

In Northern Queensland, Roger Hill of HTW Townsville said sales volumes were also on the rise, reflecting the improving levels of confidence in the cattle industry.

He predicts more activity in the corporate-sized sector of the market in particular.

“The corporate sector has been very quiet with no transactions, but the phones started ringing last year.

“I have never done so much due diligence work for acquisitions of cattle stations in the corporate sector than I have in the last 12 months.”

Mr Hill said he expected that actual property sales activity in the region was not far away. 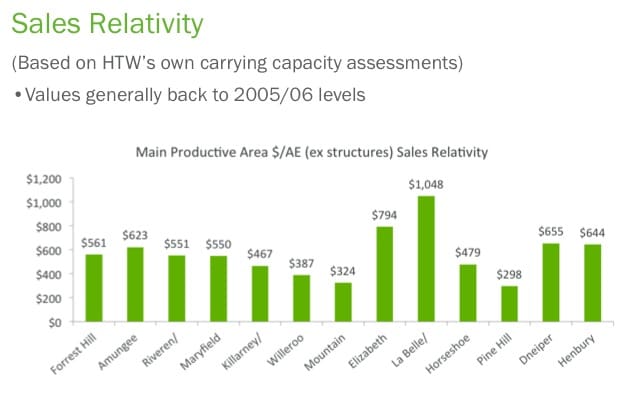 The pastoral market in the Northern Territory and Kimberley market was perhaps the most positive of the four regions featured, having experienced a clear uplift in sales activity in the past 12 months, according to Frank Peacocke of HTW in Darwin.

“No values racing away or anything like that, just a real swell of activity and it all started towards the end of 2013,” he said.

12 sales had occurred from October 2013 to mid 2014, with three of those including purchases by Indonesian and UK-based buyers.

“It was purely confidence that got things going – obviously these brave souls thought they were seeing the bottom of the market and I think they were probably right,” Mr Peacocke said.

“Obviously the live export market was improving into Indonesia, and the numbers were growing, steers were getting $1.70, and the other fundamentals were obviously there, and other markets were emerging such as Vietnam.”

The second half of last year saw fewer sales but was headlined by the landmark purchase of Elizabeth Downs, which represented the first ever Chinese investment into the NT pastoral property market.

As with other areas, Mr Peacocke said he believes values have settled at similar levels to 2005-06.

“The peak has been taken right out and I think that is where we are back to as value levels go,” he said.

“This would probably be the best time to buy a property in the last 10 years you would think, particularly based on the stronger fundamentals underlying the cattle industry.”

He said there were currently only very few properties with scale currently being formally advertised in the NT or Kimberley regions.

“I think we will see a few more sales this year,” he told the audience.

“Vendors and purchases seem to be on the same page as far as values go, and the fundamentals are good.”