Goodfellow says likely rise in interest rates no cause for alarm

THE FORECAST rise in inflation and flow-on to interest rates is no cause for alarm in the agricultural sector, according to CBRE Australian agribusiness general manager David Goodfellow. 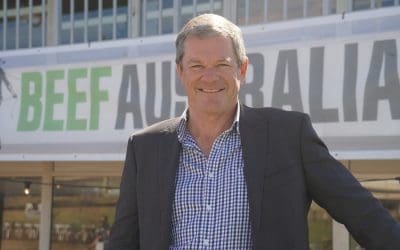 Speaking yesterday in the Agribusiness and the Future of Investment webinar delivered as part of CBRE’s Future Cities series, Mr Goodfellow said inflationary pressure was in part a reflection of strong prices for key Australian commodities.

“What we’ve seen in the past few years is commodity prices starting to rise; it is one of the drivers of inflation.

“If inflation is expected to continue, we should also expect interest rates to go up and that will largely be driven by confidence in the outlook for our commodity prices.”

He said key Australian commodities including beef and wheat could expect to be carried along in the current.

“I know people get nervous about the outlook for higher interest rates (but) we normally do quite well in those environments.

“All other things being equal, we’re in for some very exciting times in our industry.”

He said the current investment cycle was being fuelled by a “massive increase” in demand for Australian commodities.

While Australia is now seeing disinvestment from China as it redeploys capital in South America, Mr Goodfellow said it had left a positive legacy.

“We’re using the fact now that people know about the beautiful quality of what they grow.

“We shouldn’t underestimate the positive impact from China on our sector, particularly over the past six or seven years.” As evidenced by Canadian funds in particular investing in cropping and horticulture, Mr Goodfellow said this was likely to continue.

This is based on them paying less tax on their revenue, and being able to secure lower interest rates than most of Australian investors.

Mr Goodfellow said overseas super funds also had less need for liquidity than their Australian ones because they distribute to investors through defined benefits.

Also, he said agricultural returns have been shown to have no correlation to bonds, shares and other assets foreign super funds may have, which adds to their appeal.

He said a number of funds have said they were aiming to be carbon neutral by 2050, and Australian agriculture with the potential to generate carbon credits was all the more attractive if the fund portfolios included carbon emitters such as coal mines.

“It provides the ultimate diversification.”

“With access to lower interest rates and lower tax rates, they can still make more out of their assets.”

He said the higher net returns offshore funds can make enable them to pay more for land than Australian entities, even when they carried a higher debt-to-equity ratio, and this was pushing up land values.

However, he said since Australian businesses were getting more competitive as they accessed cheaper money and lower tax rates.

“Right now in agriculture we’re investing very heavily into research-and-development activities to try and use our land so much more efficiently compared to last year, last decade, last century.”

He said these advances required investment, and most of it was coming from the private sector.

“Some of it is coming from the government, but not much.”

“In Australia, we’re being opened up to technologies used in the rest of the world.”

When comparing agricultural investment by sector, Mr Goodfellow said per-annum returns for the top 25 per cent of farmers were all around 12pc, and provided the “great combination” of yield and capital growth over time.

His figures showed that livestock has the most modest revenue outlook at 10pc, compared with 20pc for dryland cropping and 20pc for horticulture, but was the most flexible.

“Why wouldn’t we all go cropping?  Because of that risk of volatility.

“That’s quite different to dryland cropping.

“You can’t pick that seed up and move it elsewhere once it’s in the ground.”

Likewise, horticulture with the highest operating return comes with the caveat that trees have a limited life, and replanting also means landforming and reinstalling irrigation. An outline of returns and variability by sector based on the performance of the top 25pc of Australian farmers. Source: CBRE

Mr Goodfellow said WA, and also central and northern NSW, appeared to represent the best buying for cropping country in Australia at present.

He said the benchmark figure of money needed to buy enough land to grow a tonne of wheat sat at around $2500 in eastern Australia.

“For enough land to grow that same tonne, it’s a lot cheaper in WA than in the eastern states.

“That could be corrected in the next few years.”

Mr Goodfellow said central NSW was the epicentre of eastern Australia’s most recent drought, and its landholders were consequently not as well placed as those in southern regions and WA to expand.

“They don’t have the cash flow readily available.

“We think land in central NSW and northern NSW is very cheap right now, particularly with the strong outlook for beef and grain prices.”

Mr Goodfellow said dairy country in Australia’s southern latitudes may be set for a change in fortune.

“There’s a turnaround in the supply-and-demand imbalance not just in Australia but globally.

“We should start to see an increase in the returns for dairy farms in the next four to five years.”

Agriculture contributes around $65-$70 billion per annum to Australia’s gross domestic product, with livestock accounting for around 44pc grains 23pc, dairy 7pc, and fisheries and forestry both on 4pc, with permanent plantings of fruit and nuts at 19pc growing the fastest.