Foreign ownership of agricultural land: Growing, shrinking or about the same? 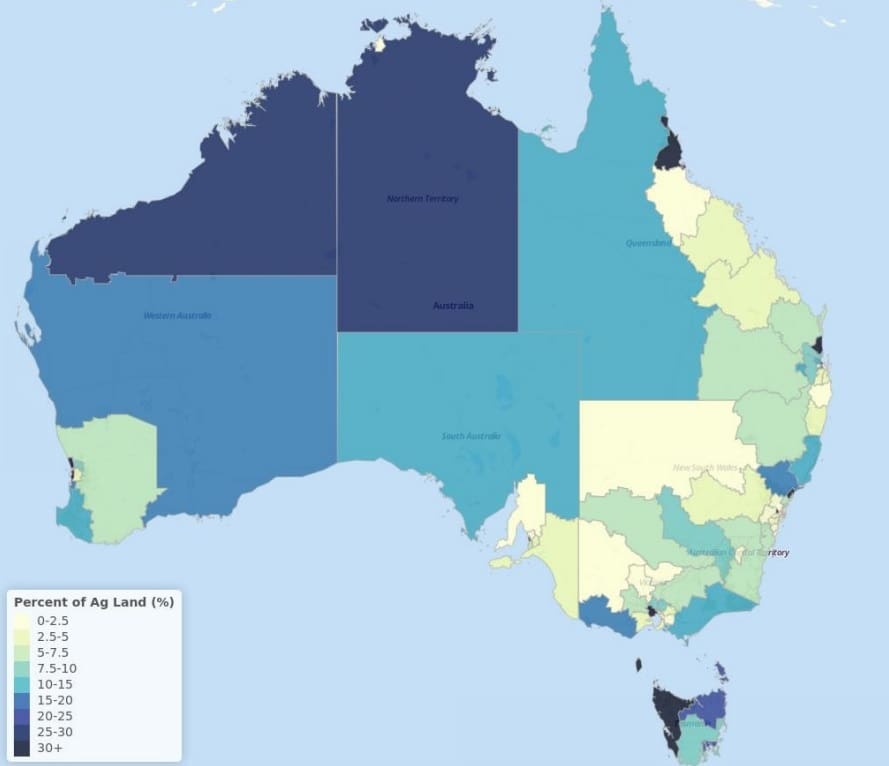 While there was a small increase in the area of cropping land held wholly or partially by foreign interests, livestock land area declined, when compared with the previous 12 month period.

The annual foreign land ownership summary released by the Australian Taxation Office today shows there has been only minor changes to the proportion of farmland owned or partially owned by foreign interests.

For the purposes of the analysis, ‘foreign owner’ is defined as entities with foreign ownership of 20 percent share or more of an asset, which means there may be a significant portion of Australian equity in those same parcels of land.

The level of foreign interest in agricultural land has remained relatively stable over the past four years. As the table below shows, it reached a high in 2015-16 before declining a little over the following two years. A change in the calculation of overall agricultural land area has made the percentage figure in the most recent assessment slightly higher than previous reports.

As the table below shows, overall there has been a 0.9pc reduction in agricultural land with some level of foreign ownership.

More than 85pc of foreign owned (and partially owned) land is used for livestock, with cropping accounting for just 3.4pc, and forestry, 2.6pc. An ‘unreported’ category accounted for a further 6.1pc.

Foreign ownership was heavily concentrated in the northern half of the continent. Queensland accounted for the largest area of foreign owned land (30pc), followed by the Northern Territory (27.5pc) and Western Australia (26pc). Other states represented far smaller areas, including South Australia (9.5pc) NSW (less than 5pc), Victoria (1.2pc) and Tasmania (0.7pc). 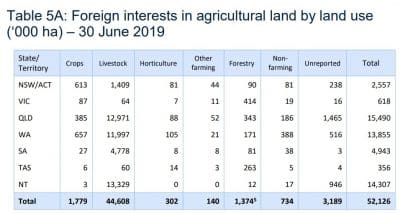 Around 83pc of agricultural land with some foreign ownership was held on a leasehold basis.

Aggregating total freehold and leasehold foreign ownership interests, China and the United Kingdom each have ownership interests totalling 2.4pc), followed by the Netherlands (0.7pc) and the US (0.6pc). The tax haven of the Bahamas ranks third on the list of leasehold land owners, well above Germany, Switzerland and Canada 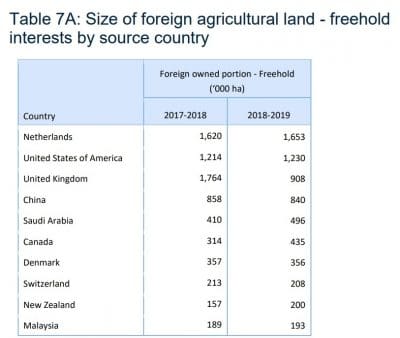 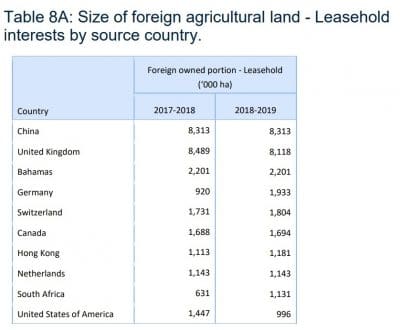 The changes in agricultural land interests by country of ownership compared to 2018 can be attributed to:

Key findings on a state and territory basis: The number of properties held (as distinct from land area) by foreign interests has grown by 3.8pc since 2017-18, despite the fact that overall land area has declined. Biggest increases were seen in NSW, up 7.8pc to 2386 parcels of land, the Northern Territory, up 4.9pc to 85 properties and Queensland, up 4.5pc to 1543. 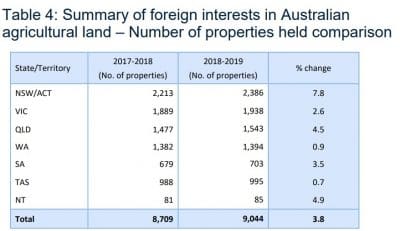