The historic Noccundra Hotel was first licensed in 1886, and was built from locally hewn sandstone hauled to the site by camel wagon.

THE historic Noccundra Hotel, one of the most remote watering holes in Queensland, has been sold by its unlikely owner, Consolidated Pastoral Co.

CPC never had ambitions to expand out of cattle production into the hospitality industry, but inherited the hotel as part of the transaction when it bought the surrounding Nockatunga Station from the Hughes family in 1990.

New owners are Neil and Margaret Turner, who have operated the hotel since October 2012.

The hotel is the last surviving building from the original Noccundra settlement, located adjacent to the Wilson River, 140km west of Thargomindah in Queensland’s far southwestern Channel Country.

The first victuallers license for the hotel was issued in 1886. The building was constructed of locally-quarried sandstone, transported to Noccundra by camel train. The hotel was heritage listed by the National Trust in 1977.

The hotel and surrounding settlement played an important role in remote communications and supported the development of pastoral operations in the region in the 19th century.

Today, Noccundra is a popular tourist stop-over point, and a watering hole for local gas miners and staff from the surrounding Nockatunga Station.

“Owning a pub in the channel country was not core business for CPC, but was for Neil and Margaret Turner,” CPC’s managing director Troy Setter told Beef Central. 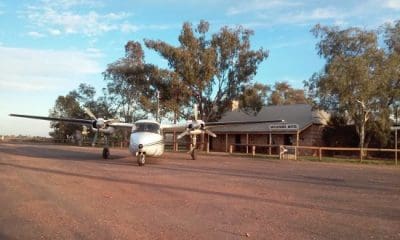