China’s foreign investment surged over the past few decades, with its focus changing as the country has developed. However global political tensions, particularly with the United States, slowed China’s foreign direct investment prior to COVID, and could remain a constraint in years to come, NAB international economist Gerard Burg suggests. 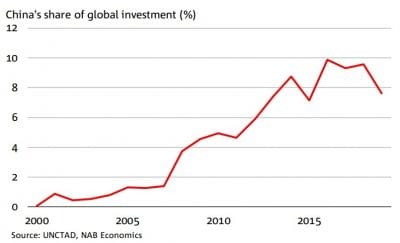 While the report covers Chinese foreign investment across all sectors, many of its conclusions can be attached to the agriculture sector.

Peaks in recent decades were in 2000 (prior to recession in the EU and US), 2007 (prior to the Global Financial Crisis) and 2015 (ahead of a downturn triggered by fears around China’s economy).

Global foreign direct investment flows into all countries totalled around US$2 trillion in 2015, before retreating in subsequent years, NAB’s report says.

A range of factors have influenced this declining trend, including tax incentives implemented in the US in 2017 designed to encourage US multinational firms to repatriate earnings from abroad, as well as a slowdown in outflows from China.

In 2019, global foreign direct investment flows totalled US$1.5 trillion. China’s share of global foreign investment remained relatively modest until 2007, at around 1.2pc of the total – before rising to almost 10pc in 2016.

This increase in share was due to both a steady increase in the value of China’s foreign investment as well as the drop off in investment from a number of major economies due to the impact of Global Financial Crisis and subsequent recessions.

Since the GFC, there was a significant shift in the focus of China’s investment by sector. Data from the American Enterprise Institute shows that prior to 2012, investment was largely focused on energy and minerals, to guarantee the supply of these materials to China’s rapidly expanding industrial sector.

In the period from 2005 to 2012, just over 70pc of China’s foreign investment was directed towards these sectors. While this sector continued to receive a large share of investment, from 2012 through 2019, there was also substantial investment in areas such as agriculture, transport, real estate and technology.

The slowdown in China’s investment since its peak reflected both domestic policies to control capital flight – due to concerns around financial market liquidity and currency stability from late 2015 through 2016 – as well as measures in target countries (particularly the US) to restrict Chinese investment, NAB’s report said.

More recently, China’s investment in the US was limited by stricter regulatory oversight and negative sentiment as a result of the trade war between the two countries. The impact of these various measures is evident in data showing a steep drop-off in Chinese investment into the US – from US$23 billion in 2017 to US$10 billion in 2018 and just US$3 billion in 2019.

China’s foreign direct investment slowed over a number of years ahead of COVID-19, however the impact of the virus domestically and internationally stalled investment in the first half of 2020, NAB’s report said.

Stronger economic growth in the second half of this year could support an increase in foreign investment over this period and into 2021, however regulatory restrictions remain in place in the US, and there remains potential for other countries to implement restrictions.

The UN Conference on Trade and Development forecast global foreign direct investment flows will decline by 40pc in 2020, which would result in total investment falling below US$1 trillion for the first time since 2005.

The organisation anticipates further falls in 2021 – in the range of 5-10pc – before starting to recover in 2022, however it notes the high degree of uncertainty around this outlook, in part due to the unknown duration of the pandemic.

They highlight that the COVID pandemic has generated shocks to both the supply of and demand for foreign investment, as well as impacting government policies – the latter having a considerable potential to constrain Chinese investment.

A key driver of the expected pickup in investment flows in 2022 is the restructuring of global supply chains, NAB says. In part, this may be required to develop greater resilience – with the fragility of supply chains highlighted during the early stages of the pandemic – but also efforts develop non-Chinese industrial capacity to avoid growing trade barriers.