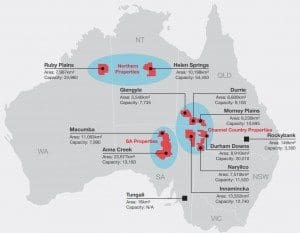 The Kidman empire. Click to view in larger format.

Any suggestion Australia is opposed to foreign investment after its decision to reject a Chinese bid to buy S. Kidman and Co would be an absurdity, says agriculture minister and deputy nationals leader Barnaby Joyce.

The Kidman decision should give Australians confidence that the oversight being applied to foreign investment here was far more than a tick and flick exercise where “anything goes through”, he said.

“This property is 1.3pc of Australia’s land mass, its 2.5pc of our agricultural land mass, and there is a strong reason and the Australian people are asking for us to have a proper oversight and deliberation into exactly who owns what and how much of it we actually sell.”

Any suggestion that Australia was saying no to everything was “an absurdity”.

“Every time we say yes we don’t have people saying well therefore it’s just a laissez faire economy, neither is it in the case of the very odd occasion you say no, that you somehow are building a brick wall to foreign investment, you are not.

Asked if the Government’s rejection of the bid had more to do with the size and significance of the holding, or more to do with national security concerns, given the proximity of Kidman’s Anna Creek Station to the Woomera Prohibited Area weapons-testing range, Mr Joyce offered little clarity, saying only that it came down to a “whole range of reasons”.

And what message would the decision send to foreign investors about buying in Australia?

“It says that there’s going to be a proper review process,” Mr Joyce said.

‘No one in their wildest dreams would think you could buy 1.3pc of China’

“No one in their wildest dreams would think that you’d be able to go to China and buy 1.3 per cent of their land mass or go to Japan and buy 2.5 per cent of their agricultural country, or go to the United State and without any questions asked, buy an area of land that would be the same size as a number of their states without the proper oversight by that nation’s Government.”

Having just returned from a trip to China, Japan and Korea, Mr Joyce believed investors from those countries would understand Australia’s decision.

Mr Joyce said his personal preference was that Australian assets be owned by Australian people, but he also recognised that in many instances it was to Australia’s advantage to have foreign investment.

Australia was “quite clearly the most liberal nation on earth” in allowing people to come and buy its most precious asset which was its land.

“We’ll remain that way but this does not mean that we will agree to everything. At times, and for the right reasons, we will say no and in this instance we don’t agree.”

The time it took for the Foreign Investment Review Board and the Federal Treasurer to make the decision, rather than the decision itself, has concerned property industry stakeholders.

The foreign investors involved spent large amounts of time and money on due-diligence to get to a very advanced stage, only to find the Federal Government would not approve their purchase.

The sale of Kidman was publicly announced more than seven months ago in April.

Colliers International agricultural director Rawdon Briggs said Mr Morrison’s decision was a reasonable view for a treasurer to have, but suggested the decision could have been reached earlier.

“It would have to be disappointing for the vendors that they are only now finding out now, so far advanced in this process,” he said.

Another factor that may affect future foreign interest are the new non-refundable fees foreign buyers will have to pay from December 1 for FIRB to process their investment applications.

The new surcharges amount to around 1pc of the value of the proposed purchase, up to a maximum fee of $100,000 for any purchase above $10 million (See more details on the FIRB website here).

The combination of the new fees and the very public rejection of the current Kidman purchase offer is likely to discourage other foreign investors, says Brisbane-based legal firm McCullough Robertson.

“For large aggregated landholdings such as Kidman, the price tag inevitably means the list of potential buyers will include (or be dominated by) foreign investors,” the firm said in an statement released today.

“There will undoubtedly be concern amongst those wishing to realise the value of such holdings that the buyer pool has just been reduced or discouraged in a way that sees any premium for having operations of scale is reduced or eliminated.

Whether the government’s decision results in a negative impact on rural land valuations remains to be seen.”