Between $32 and $40 million is anticipated for one of Western Australia’s most iconic and historic cattle stations.

Being offered for sale for only the fourth time in 100 years, Balfour Downs and adjoining Wandanya are currently operated as a beef breeding enterprise running about 16,000 cattle – predominantly Brahmans, with some Droughtmaster infusion.

Twelve months ago, Mr Ma sold the 705,700ha Wollogorang and Wentworth Stations, which straddle the Queensland/Northern Territory border, for $53m (WIWO including 30,000 head of Brahman cattle and comprehensive station plant).

He had held the large-scale Gulf of Carpentaria district grazing properties for just under four years.

The 634,004ha Balfour Downs Station and Wandanya are located east of Port Hedland and 175km north east of Newman, providing good access to port facilities on the west coast.

The crown pastoral lease, which adjoins Hancock Prospecting’s Roy Hill mining operations, was purchased in December 2014 for $18m, including 40,000 head of cattle, through the Australian arm of Mr Ma’s Tianma Bearing Group (TBG).

At the time, Balfour had been developed into one of the state’s top cattle properties by veteran pastoralist Don Hoar.

Mr Ma acquired Wentworth and the Balfour breeding operations in a bid to supply beef to China, including live exports and processing in WA, after earlier setting up a supply and distribution network for quality local wines. 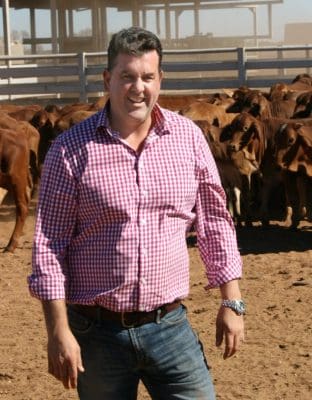 “Unfortunately, it was difficult to own the whole value chain and as a result, the breeder part of the cattle business is being divested,” he said.

“TBG will now refocus on the businesses where it can add value. However, the love affair with Australian agriculture is far from over.”

The company’s 8000ha Emu Downs Station, further south near Cervantes, which is used to finish cattle from the Balfour breeding operation, will be Mr Ma’s only remaining livestock asset.

“Absolutely not. It is an asset and the centrepiece of TBG’s agricultural business. There are future plans for Emu Downs.”

While Mr Blythe would not be drawn into details, the proceeds of the Balfour sale could be further invested into finishing cattle on Emu Downs and sending boxed meat into China.

Located in one of WA’s richest mining regions, the grazing country is rich in minerals and there is no need for supplementary feeding, as the country enjoys a high plane of nutrition giving stock high fertility and weight gains.

It had developed the 92 equipped watering points, including 35 ring dams of 18,000 cubic metres, 48 fully equipped bores and numerous permanent and semi-permanent pools along the river and creek systems across the property.

Many of the dams had been fenced and installed with submersible pumps. All bores have standard uniform troughs and tanks on cement slabs and a ‘super bore’ featuring 27km of pipe, Mr Blythe said. The sale includes around 16,000 Brahman/Droughtmaster cross cattle which Mr Blythe said have a strong reputation with local and live export markets.

Balfour Downs and Wandanya are being sold on a walk-in walk-out basis with extensive plant and equipment which are in good condition.

The property is the birthplace of the Australian author Doris Pilkington, from where she drew inspiration for her book, Follow the Rabbit Proof Fence, a story of three Aboriginal girls who escaped from the Moore River Native Settlement and travelled 2414km over nine weeks to return to their family.