Black River is a global asset management firm specialising in alternative investment strategies. Formed in 2003, the company is an independently-managed subsidiary of privately-held Cargill, one of the world’s largest suppliers of food, agricultural and industrial products and services.

In its most recent investment, Black River, under a joint venture called Racecourse Projects with Mackay Sugar Ltd, has recently purchased grazing property Hylton Park near Mackay. No price was disclosed.

Beef Central was told by a spokesman from Mackay Sugar that the sale price primarily reflected grazing land value, not its potential for irrigated or dryland cane production.

The 3244ha Hylton Park cattle property will be converted to cane production over the next two years. The holding incorporates a small feedlot and has a carrying capacity of up to 1800 head of mixed-age cattle. The vendors estimate that the equivalent carrying capacity of backgrounders would be approximately 2300 head, without the use of the feedlot. About 400ha is used for hay production. 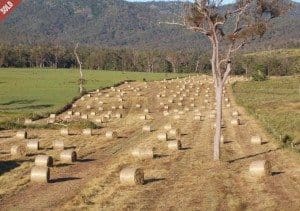 The Hylton Park holding is situated in the Blue Mountains area, adjacent to the 1200 ha Prospect Creek grazing property purchased by Racecourse Projects earlier this year.

Some of Queensland’s cane regions, including Mackay and Cairns, have steadily lost cane growing land since about 2000, due to conversion to Managed Investment Fund forestry ventures, urban encroachment, and local land acquisition for alternate land-use by cashed-up local miners.

Over the past two or three years, however, millers including Mackay Sugar have embarked on projects like that undertaken with Black River through the Racecourse Projects JV to repatriate land for cane production.

Mackay Sugar chief executive officer Jason Lowry said the agreement with Black River highlighted Mackay Sugar’s commitment to cane expansion and is in line with the company’s strategic plan of increasing its annual throughput to 5.8 million tonnes by 2021.

The Prospect Creek property is currently being developed into canegrowing land and development is expected to start on Hylton Park next year.

In May this year, it was reported that the BFB Group hedge fund run by Cargill had enjoyed another strong profit from its Australian farming investments.

Black River Asset Management reaped the rewards of another good season, with BFB delivering a $3.3 million profit and a $4.2 million upward revaluation of property holdings for the 2014 year.

In 2012, the $220 million BFB made headlines after snapping up the prized 1875ha Billabong Station in the Eurongilly Valley, east of Wagga Wagga, NSW for about $10 million.

In 2013 Black River made its first investment in the Mackay canegrowing area, purchased one of the largest established canefarms in the district for $10.5 million.

Cargill in 2011-12 also made grain farming investments near at Temora, in southern NSW, operating under a different equity partnership. BFB Group bought about 15 grain farms in the Temora district. Black River has a significant stake in the BFB Group, said to be worth around $40 million.

As reported last year on Beef Central, Black River has also made a substantial grain farming land investment on the Darling Downs, under a fund called One Tree Agriculture.

During 2014 Cargill quietly picked up an estimated 7000 hectares of prime Eastern Darling Downs farming country, much of it on good brigalow/belah soils between Warra, Jandowae, and Dalby. All of the acquisitions were negotiated directly with vendors, with no agency involvement.

A Black River spokesman said the investments were solely grain-focussed, and built around “buying good value graingrowing country to try to feed the domestic feedgrain market.” The model is based on ownership and direct operation, using local, experienced farm managers.

“The reason we chose the Darling Downs for this stage of the investment was its proximity to end-users, like feedlots, where we can do direct deals,” he told Beef Central at the time.

“The project is about developing a low-cost of production model, linking up with local end-users, like feedlots, because that’s where the numbers work. The secret is keeping it out of the system, and retaining control of your grain.”

“We’re very patient, and it’s about buying at the right value,” the spokesman said. “While ever the value is there, and we can create economies of scale, we will continue to buy, but obviously, over time, we will also be after geographical spread to avoid seasonal variation.”

The company stressed that it had not paid ‘over the odds’ for the Downs farming country it had purchased, but declined to disclose price information.

Nor would the company offer any guidance as to how much country it ultimately wanted to put under management. The end-point might be dictated more by value, rather than a volume objective, but regardless, it is likely to be ‘substantial.’

Opportunity, price and the need to hedge risk were the reasons offered by the Black River spokesman for the recent investment activity.

Who is Black River?

Black River is a global asset management firm specialising in alternative investment strategies. Formed in 2003, the company is an independently-managed subsidiary of Cargill, a privately-held corporation and one of the world’s leading suppliers of food, agricultural and industrial products and services.

The company’s website says it offers differentiated sources of alpha (active return on investment) to its investors through a range of investment strategies in both developed and emerging markets. The company’s core investment capabilities encompass both public and private markets and include relative value, directional, event-driven, macro and natural resource strategies.

“We apply these insights to our highly focused strategies built on our core capabilities,” the company says. “Combining broad perspectives with focused strategies, Black River delivers diversified sources of absolute returns to our investors.”