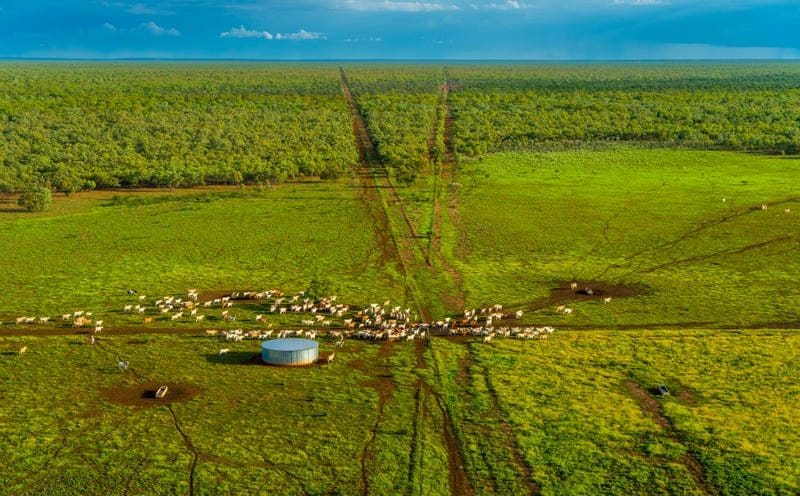 AN institutional-scale beef enterprise with unprecedented development and opportunity in the Northern Territory is attracting strong international and domestic inquiry.

The 10,034sq km Walhallow Aggregation, operating an exceptionally low-cost beef production model, has returned to the market this month after being withdrawn in December last year.

The 3580sq km Walhallow Station and 6454sq km Creswell Downs are situated on the northern end of the Barkly Tableland, east of Daly Waters, 994km from Darwin Port and 1508km from Townsville.

Rawdon Briggs and Jesse Manuel from Colliers Agribusiness have been appointed to advise Australian billionaire Brett Blundy through the sale process. It is understood Mr Blundy is taking advantage of the strong investment demand for beef cattle assets.

Mr Blundy’s private investment firm, BBRC, bought Creswell from Macquarie’s Paraway Pastoral Co in 2015 for a then Australian record (for a single cattle station) of about $100m, including 48,000 head of cattle.

Once he offloads Walhallow, his remaining NT pastoral asset is the 7100sq km Beetaloo, to the south of Amungee Mungee, near Dunmara.

Selling agent Rawdon Briggs reports strong interest for the aggregation, with several offers already on the table, above $200m.

“An interested party needs a reasonable cheque book to achieve a transaction of this value. Inquiry is mostly coming from institutional high net worth types looking to buy scale in the Territory,” he said.

“Around half the property (500,000ha) sits above a 600mm rainfall belt where timber grows and this is attracting a number of carbon groups for potential savanna burning.”

Savanna burning is an approved emissions reduction methodology (not a carbon storage project like tree planting) already in practice in several places across high rainfall areas of the Northern Australia.

The highly-improved Walhallow Aggregation has been subjected to intensive development over the past seven years, focused on the provision of additional watering points and subdivisional fencing aimed to expand carrying capacity by spreading grazing pressure more evenly across the country.

Next week, fencing contractors arrive to complete a significant amount of fencing on Creswell Downs, which was suspended in 2019. Cresswell at one point was the pastoral headquarters of the late Peter Sherwin.

The cost of the completed works is estimated at $35.5 million, plus what the vendors spend this year.

“I flew for hours over the properties and every few minutes I could see a trough. The water developments have enabled the country to perform and hold cattle numbers through the worst drought the Territory has ever seen.”

Mr Briggs said while the recent sale of Miranda Downs moved the dial upwards, a number of other factors are contributing to the price expectations for Walhallow and Creswell.

“It is a combination of appreciating land values, the completion of water and fencing works and the higher number of cattle. However, the live export price for cattle is probably the biggest driver of price.”

The expansive flood-out areas also have potential for cotton and grain production, making the investment suitable for a number of alternative future operations.

Walhallow and Creswell Downs are being offered for sale on a walk-in-walk-out basis including a 61,000 head Brahman base herd – up 9000 head on the figures being quoted in June last year.

Mr Briggs said Brett Blundy had employed a livestock agent, in addition to the manager, to count all livestock that enter and leave the yards.

“That figure will be updated every night and at the end of this first round muster, the audited livestock numbers from a third party will be used as a guaranteed total on the contract.”

The aggregation is for sale via a two-stage international expressions of interest campaign closing on April 20.