BEING ‘investment ready’ will be one of the keys to financial recovery after rural Australia emerges from drought, rural valuer Shaun Hendy told an Outback Business Summit held at Brisbane’s Parliament House on Friday.

Mr Hendy, director of valuation at Colliers International, told the meeting that despite the agriculture crisis and difficulty in recapitalising rural Australia after drought, the future for agriculture looked bright. 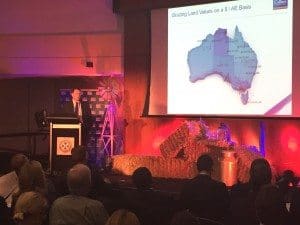 He said the road for farmers and graziers had been tough over the past decade, due to the drought/flood cycle and unpredictable seasonal conditions, and domestic and foreign governments making decisions that impacted on primary producers’ ability to earn – whether it be bans on imports or exports.

“Most graziers will be dealing with the drought aftermath by trying to restock and get their business generating an all-important cash flow,” he told the Brisbane summit.

“With a national beef herd reported to be at 20-year record lows, the supply of cattle will inevitably be restricted next year.”

Against this background of herd rebuilding and potentially high cattle replacement values, access to capital would be all-important. Approximate values for grazing land across eastern and northern Australia, on a $/AE basis. Click on image for a larger view

Mr Hendy said grazing land values in many areas were now on an upward trend, and the ‘bottom of the market’ opportunities for investors were now gone.

“The improvement in land values will help many cash-strapped businesses access working capital, so long as debt serviceability exists,” he said. “We believe that land values are already improving, with recent transactions showing greater market confidence.”

Capital would be critical in the post drought recovery phase, and it could be raised through a number of channels: traditional banks, specialist livestock financiers or equity investors, Mr Hendy said.

“Other options may include agistment management of other producers’ herds, agistment with a share of profit on sale of cattle, and sale and lease-back. The options for accessing capital today are more varied and can be structured to suit each business’s requirements,” he said.

But to access this capital, beef and sheepmeat producers needed to be “investment-ready”, and have the relevant information to provide to stakeholders like banks and investors. This included information such as:

“Relevant information relating to productivity, such as stock numbers and weightgains, is important data that is easier to record and manage in the current age of technology,” Mr Hendy said. “It says a lot about management when it can be produced when requested.”

Fundamentals of the beef and sheep industries were good, however in northern areas, 80 percent of Queensland was still drought declared, Mr Hendy told the gathering.

“The economics of beef production, having turned 180 degrees since early last year, has been a major driver. This has been influenced by a declining domestic herd as a consequence of drought, a declining US herd which has also been influenced by drought, an increase in red meat demand from Asia, and stabilising live export cattle markets in Indonesia and other parts of Asia.”

“The live export trade has worked hard to reduce its reliance on single markets, and traditional buyers are realising that they may soon have more competition for our beef and livestock.  We need to be mindful, however that Australia is not the only exporter of meat and our focus needs to be on producing safe, quality food.”