TURNING over a property profitably only works when the market is moving forward, and it has been making ‘forward progress’ – to say the least – for the past three years.

This week’s property review examines grazing property re-sales – holdings that have transacted a number of times over the past two to ten years.

Re-sales are not all that common over shorter timeframes, but they do happen, and provide a graphic representation of recent market movement.

There is a long list of motives behind buying and selling a property over a short timeframe – from family issues to health or financial.

In some cases, it is a short-term strategy – purchasing country for grass can equate to the cost of leasing. Buyers hope to get their money back and are sometimes rewarded with capital gains. Others try to capitalise on the market and reposition their assets.

Rockhampton-based Will McLay, a property valuer with Herron Todd White, has unearthed some excellent examples of grazing property re-sales that clearly illustrate just how far the market has moved, and how quickly.

In the table published below, a series of re-sale property examples across Queensland showed percentage changes in value as high as 58pc per annum (a holding in Central western QLD, over 41 months from August 18), to 53pc PA (same region, over 17 months from December 2019) and 45pc PA (Central QLD coast over ten years to October 2021). He said grazing re-sales are interesting for valuers, because they provide good benchmarks on market direction.

“The sale and re-sale of a property which maintains the same physical characteristics in different markets provides one of the better examples of true market trends,” Mr McLay said – however every property sale was different. 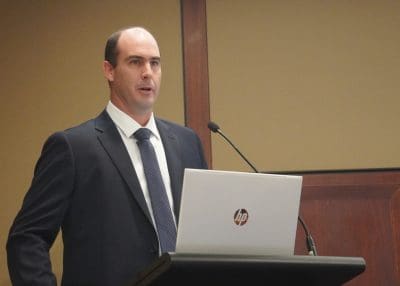 “There may be various reasons why a vendor chooses to sell or buy a property and that could distort the broader direction of the market. Assuming they are fairly typical buyer and seller scenarios then those transactions are the best evidence of where the market is trending.”

Larger grazing operations are more likely to transact with some level of stock, however valuing striped properties back to a ‘bare’ basis.

“When there is significant capital uplift in the market cycle, expenditure undertaken on infrastructure can have minimal relevance in the context of the total increase in the value of the property.”

“In other words, a really strong market can engulf property developments and improvements. More often than not, places return to the market in the same condition and still demonstrate solid levels of uplift,” Mr McLay said.

He said each re-sale should be assessed on a case-by-case basis.

“If development on the property clearly justifies an uplift in carrying capacity or productivity, then the market is likely to recognise this in any stage of the cycle. However, when there are few properties on offer to the market, the general state of improvements has a reduced impact on values.”

In Mr McLay’s view, Central Queensland is the most reactive grazing market in the state.

“The region has a large number of very high-value family operations with scale and the ability to chase properties when the market is strong – making CQ the most contested rural markets, particularly for grazing properties.”

He identified the 23,159ha Comely and Mapala Stations near Bauhinia, south-west of Rockhampton, as one of Queensland’s standout re-sales of recent times.

The holding has transacted four times since 1997.

The 22-year period of these sales reflected:

When CPC purchased Comely and Mapala in 2011 it was primarily for cattle backgrounding and finishing. It is not known how much it spent on the holding, however it is understood to be extensive (other than general land management). It was offloaded by the corporate owner in 2019 as part of an asset sell down.

Herron Todd White property valuers identified a number of other transactions across different regions in Queensland and New South Wales which demonstrate the big advances in value: