MORE than a year after electronic National Vendor Declarations (eNVDs) were launched the most producers are yet to try the paperless NVD option. 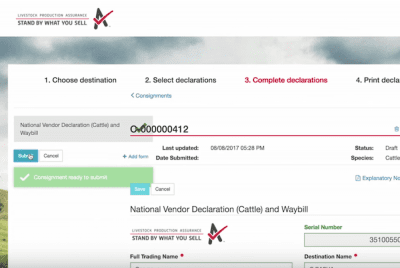 Screenshot of an eNVD page from an LPA YouTube video.

MLA’s Integrity Services Company launched eNVDs in August 2017 to allow producers to submit declarations about the food safety status of their cattle more quickly and efficiently, and to reduce NVD non-compliance rates.

Unlike traditional paper-based NVDs which cost of $40 per book, or 95 cents per ‘eDec’ (the online printable version of the traditional NVD), eNVDs are free for LPA-accredited producers to use (As of August 2017 producers pay a three-yearly fee of $60 plus GST to maintain LPA accreditation).

Producers can access eNVDs through the LPA service centre website or through one of the various subscription-based livestock management software products and apps that now incorporate eNVDs, including AgLive, Maia Technology or Agriwebb.

Several agents and processors contacted by Beef Central in recent weeks have reported that the rate of take-up of eNVDs has been very slow since they were launched 12 months ago.

Cattle sold with traditional paper based NVDs according to the ISC in the past 12 months accounted for 56pc of total sales, while ‘eDec’s accounted for 31pc.

The biggest users of eNVDs and eDecs according to the ISC are feedlots.

As a concept eNVDs make sense – they allow information to be transferred faster and more conveniently and with more checks in place to improve accuracy and compliance rates – so what is holding adoption rates back?

One view offered was that eNVDs in their current form aren’t yet entirely compatible with prevailing business rules and the practical realities of selling cattle.

A processor said several people in his company need to see hard copies of each NVD for administration purposes, so traditional NVDs were still used.

Some felt eNVDs hadn’t been designed with the practical user in mind, while others believed there was no problem with eNVDs in their current form, but saw the problem as a lack of motivation to change by producers and the ‘generation gap’: “You have lot of blokes 60 and 70 plus who are not going to do an eDec, they’re going to write the thing out and give it to the driver.”

In some cases the eNVDs being accessed were still being used in the same was as traditional NVDs: “We see people going on and accessing and then printing them out and filling them out, but not electronically sending them,” Elders’ Paul Holm said.

Lack of connectivity is also an issue. eNVDs are designed for use offline, with submitted information uploading to the NLIS database as soon as the device comes back within a network signal. In many cases a device used to upload eNVD data at the yards when cattle are transported will return to a signal, at the homestead for example, and will automatically upload eNVD data to the database before the truck has reached its destination. However may producers experience connectivity problems and a lack of trust in the new electronic version over the traditional paper-based version remains a key point of resistance.

He said eNVDs were a work in progress, and it was never the expectation that that a solution could be rolled out and immediately fit the needs of needs of each sector of the supply chain.

He said the ISC continues to work with each sector – producers, lot feeders, saleyards, agents, transporters and processors – to identify and resolve issues around functionality and connectivity that are currently limiting the uptake of eNVDs.

“Our approach is to make it as simple as possible, while ensuring they comply with program rules and standards,” Mr Holmes said.

“We’re trying to find a happy medium between industry, legislation from a LPA perspective and to make sure transporters are happy around recording when they’re leaving.”

Mr Holmes said the ISC is also looking at the role QR codes could play in allowing further points along the chain to access data inputted into eNVDs where connectivity is a problem.

In feedback to Beef Central processors said eNVDs should include a mandatory check process to prevent them from being sent if any question has not been answered.

“A mandatory check box where the form won’t let you go to the next part if it is blank would alleviate a lot of the problems we see with NVDs,” one processor commented.

Another processor said of eNVDs: “we just want it to happen”.

“I think the electronic NVDs will take a lot of the current problems out and we would get them a lot earlier,” he said.

“Instead of coming in a trickle and then a mad panic at 5 in the morning, we could sort any problems out earlier, it would give us more time.“