Wild dogs under the microscope at Kalgoorlie

AS the wild dog problem continues to grow for Western Australian livestock producers, one of the control options being put under the microscope at a conference in Kalgoorlie last week was cluster fencing.

It’s an approach being embraced in Queensland, and involves groups of landholders joining forces to establish high quality exclusion fencing around the boundary of the combined properties. 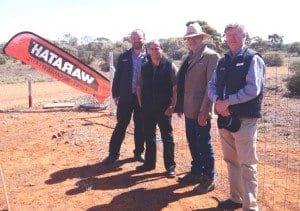 The WA Goldfields region used to be primarily sheep country, but pastoralists are increasingly shifting into cattle as dogs become more of an issue.

“I fully support fencing as part of an integrated wild dog control program,” he said.

“The cluster fencing approach being utilised in Queensland has been successful because everyone inside the fences is committed to getting rid of the wild dogs inside of it. I’ve met quite a lot of landholders over the years that have fenced their property to stop the dogs coming from next door only to find they were actually living on their own place,” he said.

“Another question I’m asked regularly is about the height of an exclusion fence. Jumping isn’t a natural behaviour for dogs and research on radio-collared dogs show wild dogs will try to go under a fence, before they go over.

“That means the key is ensuring there’s an apron, as close to the ground as possible and adequately secured.”

Once the dogs are under control, Mr Mifsud believes producers are better able to diversify, which helps them prepare for and manage drought.

“Being restricted to cattle can be difficult in some regions, as sheep provide income through wool and have more capacity to cope with drought. They also bring benefits to the region, and there’s more employment,” Mr Mifsud said.

Proposed 700km exclusion fence would be one of first in WA

Mr Sala Tenna has been in discussion for some time to a group of livestock producers around Kalgoorlie who’ve been looking into cluster fencing for several years.

“They would be one of the first groups in WA to take this path, although the idea is still in the development stage,” he said.

“If they go ahead, the fence will be around 700km long, so it’s not something anybody would rush into.”

In Queensland, Waratah had helped to build several cluster fences, providing valuable lessons to pass on about what worked (and what didn’t) from that experience.

Mr Sala Tenna said fencing was a key element in the control of wild dogs as it could give landholders peace of mind, because it worked ‘24/7.’

“To be effective, it’s important to start with the end in mind – what is it that you’re trying to keep in or out, and what are the characteristics of those animals when confronted with a barrier?” he said.

“A good exclusion fence needs to be strong and durable, easy to install and maintain, and give value over the long term.”