The vast expanses of a Legune freshwater pasture floodplain. 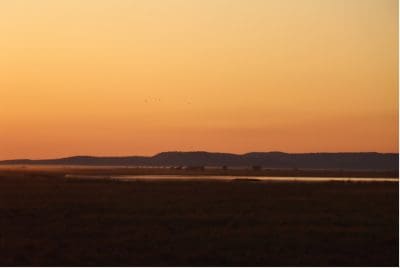 Dawn breaks in over Legune

Picture postcard landscapes unfold at every turn on Legune Station, but it is more than stunning scenery that sets the remote property apart as one of the great cattle stations of northern Australia.

Legune Station was once an outstation of the sprawling Victoria River Downs and was later owned for a time by LJ Hooker of the real estate empire fame. 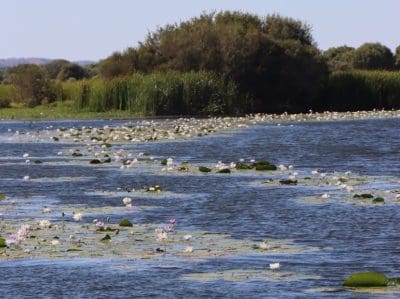 Just over three years ago Legune was sold by poultry and pork industry heavyweights the Hall, Cameron and McLean families, owners of Sunny Queen Eggs, to AAM Investment Group (AAM), adding a jewel to the latter’s burgeoning crown of agricultural assets, which includes the lease of Manbulloo at Katherine, Terrick Terrick at Blackall and a range of other livestock, cropping and poultry operations across the NT, Qld, NSW and South Australia.

Two wet seasons in one

The construction of a 1,600 metre dam wall in the red rock ranges above the Legune homestead complex some 15 years ago by then owners the Hall, Cameron and Mclean families created a 35,000 megalitre dam, which is believed to be the largest privately held on-farm dam in the southern hemisphere. From the vast storage, freshwater can be dispersed via gate valves and gravity through a natural creek and diversion channel system down to and across some 50,000 hectares of natural and improved pasture floodplains below.

In effect the station is able to store freshwater captured during the monsoonal summer months to create a “second” wet season in the middle of each dry season. A further development in the form of a 2000-head feed yard at the largest of the station’s three cattle yards enables the property to maintain a stable supply of premium live export cattle right through the dry season to December.

Steering the large-scale operation are Anthony and Cassie Cox, previously the managers of AACo’s Anthony Lagoon Station on the Barkly Tableland, who have managed Legune since shortly after it was acquired by AAM in late 2018. Legune Station today runs approximately 30,000 cattle, of which 15,000 are breeders, with the herd geared primarily toward supplying feeder cattle for export to Indonesian feedlots.

A cross breeding program in recent years has also been introduced to both broaden the market suitability of turnoff for southern buyers while also playing a key role in lifting growth and fertility rates.

Cattle on the freshwater floodplain

Further strategies introduced to achieve that target include pregnancy testing and segregation of breeding groups, emphasising EBVs for days-to-calving in particular for bought-in bulls, culling non-performing breeders, semen testing of bulls prior to joining and supplementation with licks and water additives to maintain breeder body condition and optimise rebreed rates.

Selection pressure has also been applied to reduce the average frame size of breeding females by about 30kg average to achieve a more moderate, lower maintenance animal.

From historic levels of 50pc, weaning rates have been increased by 10pc in the past three years, with the aim to sustainably achieve weaning rates above 70pc in the long term.

“I think that is achievable without a doubt,” Anthony said. Lagoons replenished over the wet season

The station is staffed by an enthusiastic, friendly and close-knit team of young ringers, older hands and specialist staff including a cook, bore runner, mechanic, veterinarian, pilot, gardener and school teacher.

They come from a wide range of backgrounds and different levels of experience, but all undergo an extensive and carefully planned training and induction process at the commencement of each dry season to learn the ins and outs of station operations and working safely with cattle. 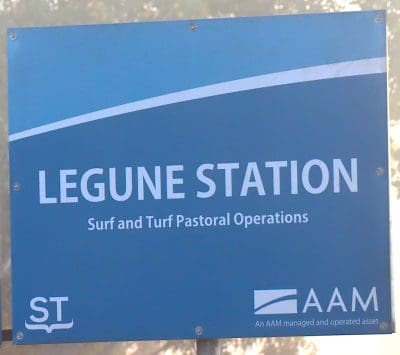 The Legune brand says it all: Surf and Turf

Among this year’s newcomers is Georgia from Brisbane who is taking a short break from agribusiness and law studies to gain a first-hand understanding of the northern cattle industry and the policy issues it faces. Pat from South Australia found it difficult to find an opening in the local sheep industry at home, but was so enthusiastic in his interview he landed a job on Legune and is thriving in his first year on the station. Mechanic Callum from Perth previously worked in Fly In Fly Out roles in the mining sector and is enthusiastically embracing the change of landscape and lifestyle on Legune – even taking the opportunity to ride a bullock in his first rodeo at Kununurra in late May. Pat from Roma (or “Rick” as he is known on Legune to avoid confusing the two ‘Pats’ on the team this year) worked on Avon Downs and then Van Rook in his first three seasons and is now one of the more experienced ringers at Legune. Then there’s “Squid” the pilot, real name Callum. In the time-honoured tradition of creating colourful nicknames ‘Callum’ became ‘Calamari’ and then ‘Squid, also deftly helping to differentiate the two Callums on Legune this year.

It may be remote but there is clearly plenty to love about life on Legune – a vibrant social life of rodeos and camp drafts bringing together the many station communities from right across the north chief among them.

Nor is an opportunity often missed in downtime to catch a barra, with a chalk board in the station kitchen and dining room recording the year’s biggest catches on Legune. The canny gardener Daco who knows the best spots among the station’s various rivers and creeks is currently leading this season’s honour board with a solid 96cm haul. Rob Loughnan from Roma with a 90cm barra caught and returned in late May while visiting his son Patrick who is in his second season working on Legune this year.

And of course there is no shortage of crocs, which are a common sight in the many water courses across the station. However, with tens of thousands of wallabies and barra to dine on, the Legune ‘lizards’ are kept well fed and attacks on cattle are said to be very rare.

The potential for losses is also minimised by ensuring mobs of cows and calves are not stocked in paddocks where crocs are more prevalent while mobs of bought-in cattle are mixed with seasoned homebred cattle to reduce chances of attack. Roma’s Michael Stanford inspects a Clipex exclusion fence on Legune. In addition to protecting floodplains from inundation by wallabies and wild dogs, this fencing also plays a key role in protecting the homestead complex from uninvited visits from another element of local Legune wildlife – crocodiles

At weaning, stock under 150kg receive access to a weaner or calf pellet to aid rumen function development. Weaners above 150kg are stocked on the flood plains where they will gain around 0.3-0.4kg per day, or 120-140kg per year.

With further improvements to the quality of flood plain pastures scheduled in coming years it is hoped growth rates will ultimately be raised to around 0.7kg/day throughout the year. Extensive soil testing has been conducted in advance of plans to trial crops including forage varieties as a future source of feed for Legune’s feed yard, which is also planned for an upgrade to 4000 head in coming years, with a roof complex to aid feed conversion efficiency.

Cotton could also be another potential crop for the station, attractive not just for high-returning natural fibre which is now at the centre of a burgeoning industry in the region, backed by a soon-to-be-operational gin at Katherine, but equally because it can provide a valuable local source of protein for cattle in the form of cotton seed. Legune has been in the news in recent years as the location of a proposed billion-dollar prawn farming development, on land on the station leased by AAM to project developer Seafarms, which had planned to develop the world’s largest prawn farm through the creation of more than 10,000 hectares of ponds on Legune.

However 18 months into the project, with connecting roads and 21 initial ponds only partially built, Seafarms announced a decision in Februrary to reduce the scope of works for “Project Sea Dragon”, after a review found the project was “not viable in its current form”. Seafarms  has stated that further work is now needed to “prove up” the investment case for the project but says it plans progress a pilot program in the next two-three years. Cattle graze near a freshwater lagoon.

For the AAM team on Legune and its core business of cattle production, there is no slowing down.

AAM was recently selected as the preferred developer for the Keep Plains Agricultural Development next door to Legune Station, which represents the Northern Territory Land Corporation’s single largest land release for agricultural development.

In addition to stocking Keep Plains with cattle, AAM’s plans also include the development of dryland farming, with potential to grow crops including maize, mangoes, bananas, tree nuts and other fruit and vegetables in future.

Back in the paddocks at Legune two stock camps are currently working through the final stages of this year’s first round muster, which will see around 6000 calves branded by the end of June. From dawn on the day Beef Central visited in late May some 18 six-deck road trains were lining up at the main Bundaberg Yards, a modern 20,000 head facility constructed by Thompson Longhorn several years ago, to be loaded with export steers for Darwin and cull cows for further south.

Just another day on a cattle station just not quite like any other. Road trains line up to load at Bundaberg Yards Cattle on the flood plain