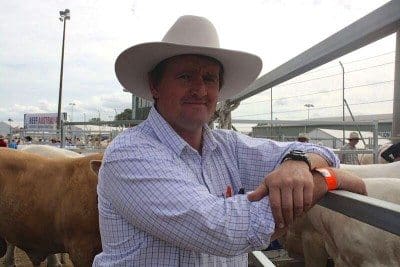 When Grant Maudsley looked in his ute’s rear vision mirror and couldn’t see his son riding behind him, he knew instinctively something was wrong.

Back tracking along the fence line of his western Queensland cattle property he came across a parent’s nightmare: his nine-year-old son in a quad bike accident.

The bloody scene that confronted him changed his family’s life forever, along with their on-property safety practices and made the current AgForce president a strong advocate for ‘age appropriate riders on quad bikes’.

“We were very fortunate our son survived; he’d been in first gear checking out some cattle, momentarily lost concentration and had ridden the quad bike through a four strand barb-wire fence,” Mr Maudsley explained.

“The wire had nicked his jugular and there were deep cuts across his face and neck, and in the few minutes it took to realise and then find him, there was blood everywhere.

“I just put him in the ute and started driving the 50km to town, while my wife held the wound on his neck closed to stop the bleeding. He was conscious, but it was the longest, most stressful drive ever.”

The youngster is one of a growing number of children injured in quad bike accidents on-farm every year.

Figures from the Australian Centre for Agriculture Health and Safety (ACAHS) show quad bikes are the leading cause of accidental death on-farm, and 16 per cent of the 161 fatalities between 2000 and 2014 were children.

A similar percentage of non-fatal quad bike accidents requiring hospitalisation or medical treatment in 2014 involved a child under 16.

“We still think about our son’s accident and we know we’re really lucky he’s alive, but it’s made us keenly aware quad bikes aren’t designed for kids,” Mr Maudsley said.

“We changed our on-property rules straight away so there were no kids on quads.”

He is speaking out now to encourage others in agriculture to take precautions when it comes to age appropriate riders on quad bikes.

Back on that fateful day, Mr Maudsley’s son was airlifted by the Royal Flying Doctors Service to Brisbane, where he says surgeons ‘stopped counting the number of stitches’.

While the scars have healed and his son has ‘completely recovered’ from the accident, Mr Maudsley says he’s still banned from riding quad bikes on the family’s cattle property, Nalpa Downs, outside Mitchell in western Queensland.

“Quads are a valuable part of on-property machinery, but we just don’t believe kids have the concentration span needed to be safe on them.

Source: Primary Industries Health and Safety Partnership (PIHSP). The PIHSP aims to raise awareness of workplace health and safety issues to improve the health and safety of workers and their families in farming and fishing industries across Australia. It is funded by the Cotton, Grains and Rural Industries Research and Development Corporations, as well as the Australian Meat Processor Corporation and Meat & Livestock Australia. For more information, visit www.rirdc.gov.au/PIHSP.