Why are researchers painting zebra stripes on cattle? It is a question that has long puzzled scientists: why do zebras have stripes?

A form of camouflage to confuse predators?

A way of helping zebras to individually identify other zebras?

A natural system of ‘air conditioning’ by regulating convection currents along the animal’s back?

However, several recent experimental and comparative studies have landed on a different conclusion: a key function of a zebra’s stripes is to deter biting, blood-sucking and disease-spreading flies.

Various studies have demonstrated that biting flies don’t like landing on striped surfaces.

A theory is that the modulating brightness and polarized light produced by stripes impairs the perception of flying insects, causing them to approach their target too quickly and affecting their ability to decelerate before landing. 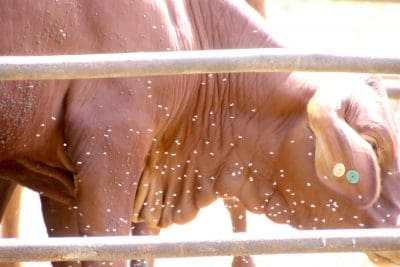 Given the economic losses caused to the cattle industry by biting flies each year – worth more than $2 billion to the US industry alone – such findings have prompted researchers at the Aichi Agricultural Research Centre and Kyoto University in Japan to explore another question.

The Japanese team studied the effect of biting flies on six black-coated cows which at various points of the trial were painted with black and white stripes, painted with only black stripes, or no stripes. The researchers said it took about five-minutes to freehand paint each animal, using commercial waterborne lacquers that faded easily.

Photos were taken at routine intervals to record the number of bites, and observers recorded the fly-repelling behaviours (head throws, ear beats, leg stamps, skin twitches, tail flicks)  of each cow throughout the experimental period. The researchers found that painting zebra-like stripes on cows decreased the incidence of biting flies landing on individuals by around 50 percent.

The researchers also found that the reduced landings of biting flies coincided with a reduction in defensive behaviours in cows.

“This work provides an alternative to the use of conventional pesticides for mitigating biting fly attacks on livestock that improves animal welfare and human health, in addition to helping resolve the problem of pesticide resistance in the environment,” the researchers wrote.

“Painting has been used as an external marker to identify animals at a distance in wildlife and livestock research and managements.

“It is a cheap, easy, and animal welfare friendly method to mark animals.

“However, painting is usually considered a short-term marker, which can persist from a few weeks to several months.

“Therefore, in the future, the development of more effective techniques to ensure the persistence of black-and-white stripes on livestock during the biting fly season (3–4 months) may be necessary in order to apply this method to animal production sites.”