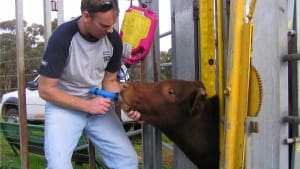 They conducted pre-treatment faecal worm egg counts in 60 cattle on each farm, including Angus, Hereford and Murray Grey breeds, compared to counts 14 days after chemical treatments against nematodes, or parasitic roundworms.

The 60 cattle were divided into four groups of 15 animals and received either injectable treatment ivermectin, oral treatments fenbendazole or levamisole and a control group received no treatment.

“We thought we would find a few farms with evidence of resistance to the drenches but to our surprise…we found that in two thirds of farms drenches were not as effective as they should be,” he says.

“We did not think it would be anything like that, it had really gone much further than we thought.”

Dr Besier says 17 of the 19 properties did not have the expected 100 per cent kill rate after drench application, including for small intestinal worm (Cooperia oncophora) and brown stomach worm (Ostertagia ostertagi).

“We found that there were cases for every one of the drenches where worms had survived so we can say the problem…is not confined to any one type,” Dr Besier says.

“We see this as a bit of a bellwether…that there is a problem developing and we are lucky that so far it has only involved this minorCooperia worm,” he says.

“But as time goes on the risk is some of the more damaging stomach worms will get involved and that will start costing farmers serious money.

“At this point…as far as an impact on the farm industry goes it would be a moderate rather than a severe affect but it has the potential to spill over into other worms.”