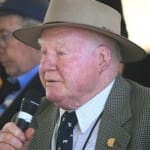 Well-known Charolais breeding identity Rob Millner passed away peacefully on Sunday, with family by his side.

Rob was one of the original breeders of Charolais cattle in Australia and remained faithful and committed to the breed up to his death.

He founded the Rosedale Charolais Stud near Blayney in NSW in 1970, using semen from full French English Charolais bulls on his commercial Shorthorn herd, before purchasing and importing Sundowner Ranches Honor from New Zealand in 1972.

Rob nurtured and developed the Rosedale Stud until he passed the business on to his son Michael in 1983, who now conducts Rosedale with his sons James and Robert.

Rob was always keen to promote the carcase attributes of Charolais cattle and was a strong competitor in steer competitions from as early as 1975, amassing an incredible number of hoof and carcase championships throughout NSW including the grand championship awards at both Sydney and Melbourne Royal Shows.

He was a member of the federal council of the Charolais Society of Australia from 1975 until 1983 and served on the body’s NSW regional committee for nine years up to 1983.

He later moved to Western Australia, where he founded and became co-principal of Downunder Charolais, located on Robley Park North, near Wooroloo, 60km east of Perth. He served on the Society’s WA regional committee and was its chairman from 1989-95.

The Charolais Society of Australia awarded Honorary Life Membership to both Rob and wife Lesley for their contribution to the Society over the years and for their dedicated promotion of their beloved white cattle.

Rob is survived by his wife Lesley and her family, and Rob’s children Michael, Robyn and Mary.

A service will be held at the Karrakatta Cemetery, Railway Road, Karrakatta, WA at Noon on Friday, 6 June.