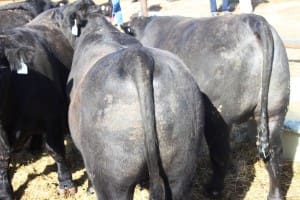 A pen of ‘Durham Black’ composites from the Morgan family’s The Grove Shorthorns at Condamine in Southern Queensland has excelled in both growth and meat quality traits to win the 2014 Mort & Co Brisbane Show Paddock to Palate competition.

The Sturrock Trophy rewards genetics that perform throughout the entire commercial supply chain, aggregating points for feedlot weight gain, carcase performance, MSA eating quality and a beef taste test, judged by celebrity chefs on one striploin from each pen of six steers entered.

The winning pen of Durham Blacks (more detail on The Grove’s composites below) finished the competition with an overall score of 2680 points. In the weight gain section the steers produced an average daily gain of 3.055kg/day to finish just behind another entry from The Grove, a pen of Shorthorn steers which gained at 3.115kgs/day.

The winning pen also performed well in the carcase competition, judged according to Ausmeat standards, finishing just outside the place-getters, but excelled in the MSA Eating Quality section.

The average score recorded across all pens in the MSA section was 1615 points. The Grove’s Durham Blacks finished with a score of 1981 points, while the four pens entered by The Grove averaged 1839 points for the MSA section.

The second place in the overall Sturrock Trophy was taken by a pen of Santa/Charolais cross steers entered by Yulgilbar Pastoral, which finished with an overall aggregate score of 2641 points, while the third and fourth placings were filled by two pens of Charbray entries from John and Estelle Drynan from Esk, finishing with 2613 points and the other on 2580 points respectively. Hinz Grazing took fifth place with a pen of Shorthorn steers that finished with 2573 points.

Interestingly the second placed Yugilbar pen and the third placed Drynan pen also placed second and third in the MSA Eating Quality section, underlining how vital this section has become to the overall placings.

Co- Principal of The Grove Spencer Morgan said he was thrilled with the performance of The Grove entries in the competition, and in particular with their performance in the MSA Eating Quality section.

“To secure the win with the MSA section of the trial is great because it really highlights what we have been striving to achieve,” he said.

“Normally high meat quality and high growth are antagonistic traits but to combine the two shows us we are successfully hitting our goals of genetic gain.

“Our four pens all excelled in the MSA section and were in the top dozen in the weight gain section so the consistency is what we are aiming to achieve”.

When asked if MSA should play such an important role in the standings he said: “We are in the game of producing protein and if the higher boning groups help the eating experience for the customer and raises the prospects of that customer returning to repeat the experience, then yes I think it rightly plays a vital role in the trial.

“The faster we can lose our breed egos and concentrate on our customer’s needs then the faster our industry will make inroads into increasing the genetic gain necessary to allow us to try and close the distance between us and the chicken, pig and lamb industries.”

The Durham Blacks are one of two composites developed by the Morgans to complement their Shorthorn operation.

The Durham Blacks combine Angus (for colour and their very well described genotype to assist in carcase quality traits and fertility) with Shorthorn, while the Durham Red combines Red Brahman (for survivability and efficiency traits) and Senepol (for 100pc British rating, slick coat, polled head and temperament) with Shorthorn.

CLASS 37B – Pen of Six Carcase