The Aussie milkman building a big business in China That oath, struck during boarding school holidays on his father’s Malanda dairy farm, didn’t quite work out as planned.

Today the PNG and Australian expat is not only very much involved in the dairy industry, he is a significant and central figure in the large and rapidly growing Asian dairy industry. 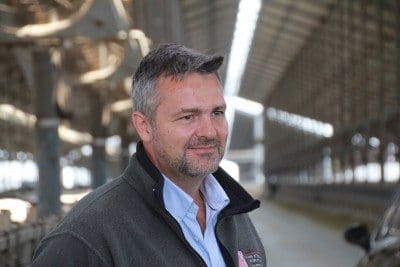 With investment partner Japfa Comfeed, now an Indonesian-listed agri-food giant, he has pioneered the development of one of Indonesia’s largest dairying companies and fresh milk brands, and more recently has overseen the creation of a major new foreign-owned dairying operation in China.

In 1975 Edgar’s father Eddie Collins returned to North Queensland (his family was originally from Tully) and bought dairy farms at Malanda.

Like many farming families, Edgar’s dad saved many of the more ordinary jobs for his son’s return for boarding school holidays. Edgar laughs as a recalls that he “hated dairying” at the time and swore he would never go near it again.

Following in his family’s pioneering and entrepreneurial footsteps, Edgar set off for Indonesia in 1991, originally with a plan to buy feed commodities for export back to Australia.

However, there he met Handojo Santosa, the son of the founder of Japfa (Java Pelletising Factory), and the man who has since overseen the growth of the then-animal feed company into a publicly listed and market leading poultry, dairying and beef giant in Indonesia.

In 1992 Edgar joined with Japfa to develop a new pilot project importing and feeding 1200 Australian Brahman cattle near the city of Surabaya in East Java.

A push into dairying followed in 1997 when their company AustAsia established a dairy farm, which now milks 5000 cows (a second similar sized farm is also being established in Indonesia).

Then in 2000 the company established value-adding operations and launched the Greenfields dairy brand, which is now the most dominant fresh milk brand in Indonesia and a leading exporter of fresh milk, cream and cheese to Singapore, Hong Kong and other South East Asian countries.

‘It’s all about happy cows’ 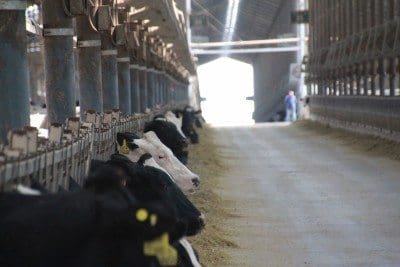 Regular cleaning of pens, sand-floors to provide a clean and cool bedding environment, good quality water, well ventilated pens, and fans and water-spraying cooling systems all feed into the low-stress design of the AustAsia dairies in China.

“We built the farm on the side of a mountain to get the climate for cow comfort,” Mr Collins said, explaining the first Indonesian dairy farm.

“It is about 1100 metres above sea level. It isn’t always easy getting everything up the hill, but the cows are happy.”

The mantra ‘happy cattle, fat cattle’ is a common refrain in Indonesian cattle feedlots and the philosophy is no different when it comes to dairying operations, Edgar said.

“The focus in our business is keeping the cows happy, everything stems from that,” he said.

“Profitability, milk production, reproduction, disease – all of the issues you get with cows comes from whether they are happy or not – it is really that simple.”

In 2004 AustAsia team expanded into China by developing a new dairy farm, the first of what is now six fully operational, similar-sized and almost identical model farms.

The China operation now comprises 65,000 cows and produces close to one million litres of milk every day.

Each farm has a similar design and footprint comprising around 100 hectares of infrastructure including 10 barns each housing 600 milking cattle, a milking parlour utilising (on most farms) two automated rotary milking machines which milk each cow four times a day, and weaning sheds and calf hutches. 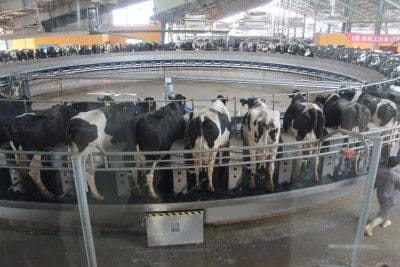 Cows step onto the automated rotating milking machines at the far end and are milked by the time they step off following  full rotation, which takes about eight minutes and 20 seconds to complete.

Each farm also includes about 800-1300 hectares of surrounding cropping land.

This serves the dual purpose of growing some of the dairy’s feed supplies, while also providing a cost-effective outlet for managing the effluent produced (which cannot be moved off the farm), which in turn provides the benefit of gradually improving the quality of the secondary-type farming soil.

Troy Zeisemer, a grain grower originally from Surat in Southern Queensland, has been working with AustAsia for the past three years to improve the farming operations and to train local farmers.

The land, which is made up of mainly finely textured soils with very little structure (many of the dairies are established within a few kilometres of China’s central coastline), is being irrigated with centre-pivots to grow forage sorghum and corn.

All corn for the ration is sourced either from AustAsia’s own farms or from other farms within a 40km radius, with the operation utilising about 70,000t to 80,000t of corn silage every year. There is a currently a major oversupply of corn in China, the result of an ongoing minimum floor-price scheme for growers, which has only just been dismantled and removed in late March.

Lucerne hay and oaten hay is imported from the US and Southern Australia respectively.

Mr Zeisemer said he personally witnessed the mind-blowing speed at which new developments can be constructed in China when he arrived in June 2014. At the time earthworks had just commenced for the construction of Farm Five. Incredibly, the same farm was fully operational and milking cows just five months later in November 2014.

A seventh farm is currently under construction and should be operating by next year. Mr Collins said it costs the company about $80 million in total to build and fully stock each farm, and the company hopes to continue building as many as two a year.

The vast majority of cows used to stock the farm so far have been Holsteins imported from Australia, and some from New Zealand. However, some of AustAsia’s farms are now producing 1200 to 1300 additional breeding-quality heifers a year. “I think the golden era of sending heifers to China has gone,” he noted. “Most of the big dairies here would now have excess heifers.” 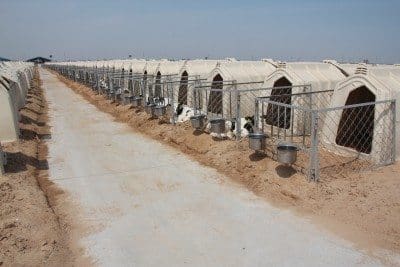 Hutches where heifer calves are weaned from 55 days.

Mr Collins said the domestic shortage of milk in China and the increased focus on food safety in the wake of the 2008 melamine disaster in Chinese milk had created a strong business environment for large, locally based professional milk producing enterprises in China.

The farm-gate milk price in China is RMB 3.8 per litre (A75c/litre), which compares to the current Australian farm-gate price of around 40c/litre.

However the production costs are much higher in China, largely because of the reliance on expensive imported hay.

Mr Collins said there was a big advantage to being able to produce fresh milk in China.

While the prospect of air-freighting fresh milk from Australia to China is creating some excitement here, the volumes involved are a veritable drop in the milk ocean of China’s dairy demand.

The amount of fresh milk companies such as Norco might fly to China in one year are equivalent to what AustAsia’s dairies would produce in one day.

“In the long term consumers anywhere prefer a fresh product over a powdered or a preserved product, and they will pay for that,” he said.

“You are always second in line if you are coming in from outside to what is happening locally.”

AustAsia’s farms are modeled on similar intensive US dairying operations. They currently produce an average of about 38 litres per head of fresh milk per day, close to double the production of Australia’s pasture/crop-fed dairy industry, but still behind the 45 litre per head averages of the leading US intensive dairy farms. 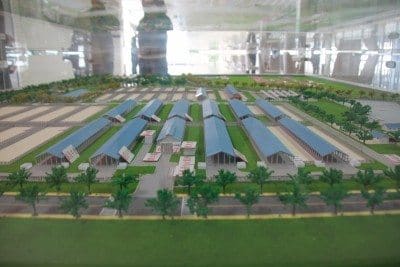 A model of Farm Four, which is very similar in scale and layout to the other seven AustAsia dairy farms in China.

Mr Collins said the company is focused heavily on continually improving genetics, management and nutrition in order to narrow the gap with the leaders in the US.

With 65,000 cows in total, the AustAsia dairy operation in China would rank among the country’s 10 largest dairying enterprises, but still far from the biggest, which has around 240,000 cows in total.

“It is such a big business here,” Mr Collins said.

With the support of the local town Government, AustAsia is also in the process of building a nearby milk processing facility which is scheduled for completion by the end of 2017, and will have the capacity to handle up to 50pc of their nearby farms’ production.

The bull calves produced by the AustAsia dairies are now purchased and fed through a nearby feedlot facility built by Japfa three years ago – keep an eye on Beef Central for more on that operation next week.

RELATED ARTICLE: ‘Build here and they will support you’