A WORLD-FIRST virtual livestock fencing product called eShepherd will take important steps toward commercialisation with an on-farm live cattle trial next month and a capital-raising campaign. 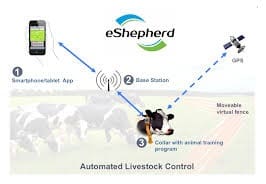 The collar-mounted device operates with an audio cue followed by a very mild electric shock to encourage cattle to avoid designated areas bordered by a GPS-plotted ‘fence’. Consistent with a CSIRO-developed training program, cattle in the eShepherd system learn to adapt their behaviour on hearing the audio cue to avoid the shock, which is one quarter the level received from a standard electric fence.

Agersens is planning to raise capital in coming months from experienced investors and supplementing this with a crowd-funding campaign later in the year. The company is working with Chatsworth Associates to plan their global growth strategy.

The eShepherd cost of the collar is estimated to be $60-$90 depending on quantity and animal size, plus installation costs. The current eShepherd model is based on all cattle in a herd having a collar.

Mr Reilly told a G21 Agribusiness forum at Geelong’s Marcus Oldham College last week that Agersens aimed to be in the market in 2017, provided it had sufficient development funds.

“Essentially we can design and develop this product and get it in the market, we just need enough money.

“We are at the last stage of designing and building a prototype and we will be starting our (cattle) trial within two weeks in New South Wales.”

Mr Reilly said there had been almost no work done on virtual fencing for work for sheep.

“We think that the solution is an ear tag, but weight is an issue, so new research is required for that.

“Although we are focussed on developing a system for cattle at the moment, we are planning to also develop a system for sheep and have some concepts for how that would be done.”

Mr Reilly said he grew up on a sheep and cattle farm in north-east Victoria in a dairying area and went onto become an engineer and product developer.

He thought of the idea of virtual fencing while visiting a property in Qld and researched earlier work done by CSIRO and others, starting his journeying in commercialising VF technology. Click here to view an earlier Beef Central article exploring early conceptual research work in the field.

Initial Agersens funding came from a Victorian government feasibility study into virtual fencing to keep cattle out of rivers and waterways and the company then decided to commercialise the patents set up by the CSIRO in 2005 and 2009.

“Agersens now has the exclusive right to commercialise those patents for livestock worldwide. The company is seed-funded by the Goulburn Broken and North East catchment management authorities in Victoria,’ Mr Reilly said.

“We have also applied for an accelerated commercialisation grant which has got us going as of October last year. Up to that point it was mostly sweat equity on my part and some other people who are helping, along with a small amount from that initial grant from Victoria,” he said.

The company says it will require $1-$2 million dollars to further commercialise the technology and progress current prototypes development to create a market ready product.

Mr Reilly said Agersens welcomed investment from sophisticated qualified investors under ASIC rules, through its proposed crowd funding campaign or people could engage with the company on social media or through subscribing to its newsletter. Farmers in New South Wales, Queensland, Western Australia and Tasmania could also apply to be a trial site or an early adopter, but not in South Australia or Victoria.

Although Victorian and SA laws do not allow live animal research with the collar system or its sale or distribution, a fully automated virtual fence cattle trial with CSIRO animal ethics committee approval would begin in New South Wales next month in association with Murray Local Land Services.

“So regulatory change is required to enable that to happen,” Mr Reilly said.

Agersens has successfully completed its first animal behaviour trial using a prototype collar. Led by Agersens’ animal welfare scientist, Sally Haynes, in collaboration with CSIRO Armidale Chiswick, the trial demonstrated the effectiveness of the company’s collar design in keeping cattle away from a feed attractant.

When asked if there was enough animal welfare benefits with eShepherd to overcome regulatory obstacles, Mr Reilly said the product would have “a huge net benefit in animal welfare” to livestock and wildlife, not a cost.

“The cost I think is in the perception that use of an electric shock is going to harm animals.

“We rely on the science which indicates that it is not harming the animal if it is done in the right way; which is about training the animal and responding to its behaviour,” he said.

Mr Agersen said the company has been working with the RSPCA and Meat & Livestock Australia. Other organisations in Australia and overseas are interested in running trials — America, Scotland and England.

“The concept essentially means that a farmer uses a smart phone – the smart phone communicates to the internet via a base station on the farm and the base station relays instructions to the collar the cow wears.

The eShepherd module can fit on any of the current dairy monitoring collars and will operate as a virtual fence.

“It has a solar cell on the front and contacts on the back,” he said.

“Once it has instructions from the base station the collar is autonomous; it doesn’t need anything else, unless you change the fence or you want information back from the animal. So on a rangeland application you could set this going for three months without it needing to contact the system,” Mr Reilly said.

“It is not actually a fence that we are designing, it is actually a shepherd. So we’ve called our product eShepherd to get across that boundary, if you like, that it is a fence,” he said.

“It is not just a fence, it does fence, but it actually shepherds.

“The key value you get from it is not from fencing, but from being able to manage the movement and control of the livestock.”

eShepherd collar is just the beginning 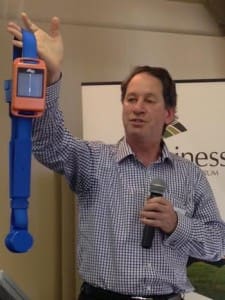 Mr Reilly said eShepherd could be used for mustering, avoiding injuries to animals including wildlife, avoiding labour costs in getting a better recovery of stock and livestock health monitoring.

“Once you have that collar on the animal it becomes a platform that you can add numerous other technologies, including all of the monitoring and technologies that you currently get in an oestrus detection collar that you might use on a dairy farm.”

“The Victorian Government spends $10 million annually to encourage the building of fences to keep stock out of rivers and waterways.

“In many cases we can fence that with a virtual fence for half the cost,” he said.

“So there is an opportunity there in order to re-divert funds from traditional fencing to farmers to install a virtual fence. Our hope is, and our plan with the CMAs is that will be up and running soon and that for eligible farmers you will get a subsidy to cover the cost of installation.”

“The primary cost is adding plastic steel rubber plus the power consumption of a GPS chip; that drives battery cost, size, weight and all the other cost factors.”