A new study has further reinforced the potential of red seaweed supplements as a method of significantly reducing enteric methane emissions from cattle. 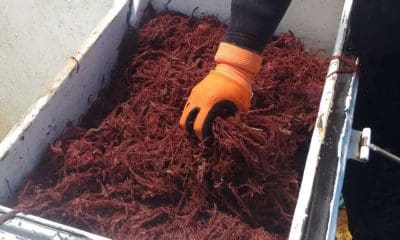 The study by the University of California Davis showed that red macroalgae (Asparagopsis taxiformis) provided to cows as a 0.5 percent feed additive by mass reduced their methane emissions by up to 80 percent over a 147 day period (five months).

The study also demonstrated significant reductions in feed costs with the supplement.

The objective of the study was to determine the effect of an Asparagopsis-based feed additive on methane production, dry matter intake, average daily gain, feed conversion efficiency and carcase and meat quality in growing beef steers.

The LD and HD treatments over 147 days reduced enteric CH4 yield 45pc and 68pc, respectively; however, there was an interaction between total mixed ration type and the magnitude of methane yield reduction.

“The persistent reduction of CH4 by A. taxiformis supplementation suggests that this is a viable feed additive to significantly decrease the carbon footprint of ruminant livestock and potentially increase production efficiency,” the authors concluded.

The study was supported by Blue Ocean Barns but independently carried out by researchers at UC Davis.

Overall the supplement the supplement, derived from red seaweed, lowered feed requirements by 14pc with no diminishing of the animal’s weight gain.

The UC Davis study demonstrated that the methane reductions were sustained during the entire 147-day trial, longer and involving more cattle than prior study.