QUEENSLAND’s southern downs region produced all the major winners in this year’s RNA Paddock to Palate Competition, the richest commercial cattle competition in Australia with total prize money of over $60,000.

If Stanthorpe is the Granite Belt, the Warwick region could be rebranded the ‘genetics belt’ after the results of this year’s competition.

The overall champions of the three major sections announced this morning all drew from the greater southern Darling Downs area:

All entries were fed at Mort & Co’s Grassdale feedlot near Dalby.

The three popular competitions attracted around 1000 head of cattle in total, making it easily the largest performance challenge in Australia. Entries were drawn from across Queensland as far north as Richmond, and south well into NSW.

Judging is based on feedlot weight gain, carcase traits and MSA eating quality, with an additional beef taste test component added to the Wagyu competition pointscore.

David and Prue Bondfield began entering purebred Charolais steers in the RNA Paddock to Palate competition four years ago after a long and highly successful career in showing stud cattle, winning many interbreed titles at major shows around Australia.

In their first year as entrants in the commercial RNA Paddock to Palate competition in 2015, Palgrove’s entries placed fourth overall out of the 118 pens of cattle entered in the 100 day class.

From that very strong start their cattle have continued to perform well in the competition, finishing runner up in the strongly contested 100-day grainfed class last year, and then reaching the pinnacle with today’s win as the overall champion of the 100 day class.

The Bondfields have won the competition, one in which many crossbreed cattle with natural hybrid vigour compete, with purebred Charolais steers, with their cattle continually performing well in an event designed to benchmark and showcase high performing genetics. 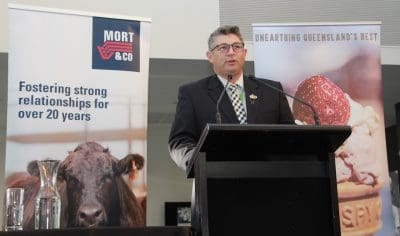 Mr Bondfield said the milk-took steers selected for this year’s competition came out of quite a dry summer/autumn, and were ‘plain enough’ going into the competition.

Asked about how the cattle were selected and prepared for the competition, Mr Bondfield said the steers were ‘really nothing special’. “They were the right weight at entry time. I guess we’ve always tried to produce cattle with carcases with a balance of yield and fat cover.

“We always seem to be up there with weight gain, without doubt without that hybrid vigour benefit you are losing some advantages there, but in the carcase section they really excelled.

“As we have always said, the Mort & Co cattle after 100 days, it is incredible how well they do under the regime they have there.

“We’re thrilled with the win, and we’re just thrilled to be part of it, it is a great industry event.”

Second was a pen of F3s from Hamblin Pty Ltd, Sarina and third was Selwyn Maller, Hamilton Park, Wallumbilla with F2 entries. Two fullblood pens finished fourth and fifth, and there were no F1 entries in the top eight standings in overall results.